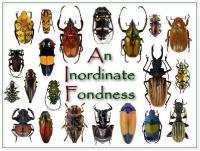 It seems like it has been a long time coming, but the Inaugural Issue of An Inordinate Fondness, the monthly blog carnival for the world’s most diverse group of animals (um… beetles), has finally made its debut! I can’t tell you how much pondering, pleading, fretting, and tweaking went into bringing this newest of blog carnivals to fruition, but it was all worth it. My sincerest thanks to everyone who helped me along the way (especially Seabrooke, Amber, Jason, and Mike) and to all who contributed for this first issue. I hope you’ll take a moment to stop by and check out the many fine contributions. If you love beetles, you’ll love this issue. If beetles haven’t exactly turned you on before, maybe you’ll find a new appreciation for them after experiencing the collective passion of the contributors. If you’ve written a post about beetles, perhaps you’ll consider participating in AIF #2 to be hosted by Amber at Birder’s Lounge. I recommend this handy submission form, or contact Amber directly if you prefer. The submission deadline for issue #2 is March 15, 2010.

Also, Jason over at xenogere has just released House of Herps #3- The Time Machine. Jason has shown himself to be a natural talent at blog carnival hosting, and this edition is no exception. In his unique, singular style, Jason guides you on a trip through time to visit reptiles and amphibians of the past, present, and future.

In celebration of the debut of An Inordinate Fondness, I close with this preview of a feature that CBS did on Christopher Marley for the program “Sunday Morning.” Here is a man who not only shows the same passion for these fascinating animals that many of us feel (though I’m not sure I would characterize Titanus giganteus as “dangerous”), but also has the talent to channel his passion into exquisite works of art (sorry about the commercials!).

Okay, after hosting three blog carnivals in the past 4 weeks, I think I’ll go hibernate for awhile!