A few weeks ago I was fortunate to get a chance to blast down to the White River Hills in extreme southwestern Missouri.  Cicindela obsoleta vulturina (prairie tiger beetle) was my quarry – I had made arrangements to meet up with fellow cicindelophile Steve Spomer (principal author of Tiger Beetles of South Dakota & Nebraska, Spomer et al. 2008) and show him a few of the better sites I had found for this species.  We would have good success due to gorgeous fall weather and perfect timing, and the next day I would be fortunate to extend its known distribution further north and east.  Still, the beetles are not early risers, and I found myself that second morning with some time on my hands while waiting for these sleepy-heads to arise from their slumber and begin their foraging activities.  As I trolled the thinly soiled dolomite exposures of a new site I had identified the previous day, a spot of red jerking erratically through the sparse vegetation caught my eye, and looking closer I was delighted to see this small but brilliantly colored jumping spider (family Salticidae) trying to evade my gaze.

Jumping spiders are perhaps the most diverse of all spider families, but it is their extraordinary visual capabilities and complex predatory and courtship behaviors that they are best known for.  Popular as research subjects, to the rest of us they are simply endearing little animals.  Some of the largest and most colorful jumping spiders belong to the genus Phidippus, which is also one of the most diverse genera in the family and boasts some 60 species in the continental United States (Edwards 2004).  The genus is characterized by details of the eye placement and carapace shape (Richman 1978) but can often be recognized by their relatively large size, numerous erect hairs, and conspicuous iridescent chelicerae just below the front eyes.  The species can be quite difficult to identify, especially the females, but I feel reasonably confident that this individual is a male of the widespread species P. apacheanus.

I wasn’t always so confident – browsing images on BugGuide left me confused after finding images of P. apacheanus and P. cardinalis males that looked almost identical. However, further digging reveals P. apacheanus is characteristically a more intense red, while P. cardinalis is more orangey with lighter bristles which may appear silvery.  Also, P. cardinalis often displays makings on the abdomen – generally a light line running around the anterior part of the abdomen and sometimes tiny light spots on the dorsum – that are absent in P. apacheanus.  (This begs the question as to whether some of the BugGuide photos may be misidentified?)  Another Phidippus species that might be confused with P. apacheanus is P. clarus; however, that species has a black cephalothorax and bright abdominal markings.  According to Herschel Raney, P. apacheanus is most often seen in fall. 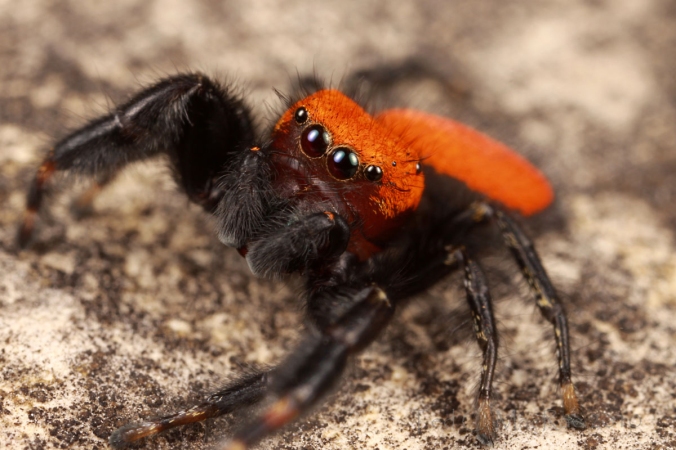 This was a very difficult subject to photograph.  He refused to come out in the open, preferring to duck and peek from behind whatever vegetation he could find.  Realizing that my desire to photograph him without any manipulation would be a lesson in futility, I used my finger to prod him towards and onto a small, flat, lichen-encrusted rock, where he would look at me with ever-increasing alarm and try to flee at the approach of the camera.  Lots of failed shots were discarded in the field before I finally got a few I thought I could live with (which, I think, are a decided improvement over my first jumping spider photos).  As I zoomed in for the closeups, I saw for the first time the shimmering of his multilayered retinae moving in the depths of his primary medial eyes.  The retina is the darkest part of the eye, thus, when the eye is at its darkest the spider is looking straight at you!

Edwards, G. B.  2004. Revision of the jumping spiders of the genus Phidippus (Araneae: Salticidae). Occasional Papers of the Florida State Collection of Arthropods 11:i-viii, 1-156, 350 figs.

28 thoughts on “Jeepers Creepers, where’d ya get those multilayered retinae?”