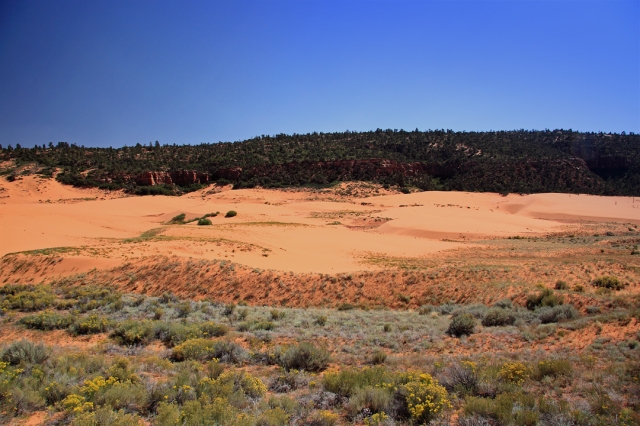 The week had started off good, with three species of western sand dune endemic tiger beetles (Cicindela formosa gibsoni, C. scutellaris yampae, and C. arenicola) and a variety of sometimes spectacular Crossidius longhorned beeltes having been encountered.  Mid-week, however, had brought a lull in our success—the long drive to southwestern Idaho was not rewarded with finding C. waynei, endemic only to Bruneau Sand Dunes State Park, and an even longer drive was required to backtrack and then drop down to the southwestern corner of Utah in hopes of finding the equally rare and restricted C. albissima.  Had it not been for our continued success with different species and subspecies of Crossidius longhorns the drive might have felt like a lesson in futility.  Still, on a collecting trip a new day and new locality brings new hope, and anticipation grew as we passed through lodgepole pine forests on stunning black lava fields and wind-carved red sandstones on the final approach to Coral Pink Sand Dunes State Park.

Words cannot describe the stunningly spectacular landscape that unfolded before us as we entered the park.  The scenery alone makes Coral Pink Sand Dunes worthy, in my humble opinion, of National Park status, but it is C. albissima—occurring only on the park’s vivid pink dunes and nowhere else in the world—that makes this place truly special.  Precisely where in the park the beetle lives is a matter of public record, as Chris Wirth (author of the intermittent but highly focused blog Cicindela) and Randolph-Macon College Professor Emeritus Barry Knisley have produced a wonderfully detailed and well illustrated brochure about the beetle and its life history, population trends, and limiting factors.  What remained to be determined was whether the beetles would be active during the brief window of time available to look for it.  Cicindela albissima is a so-called “spring-fall” species in reference to the bimodal adult activity period, but activity in the fall is much less predictable than in the spring depending on moisture availability.  The day was perfect—temperatures in the 70s by mid-morning, only a light breeze, and a sharp, blue, cloudless sky.  All we could do was look. 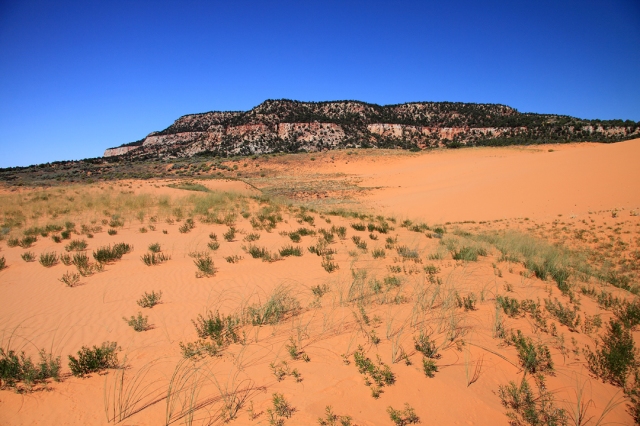 Adult beetles were found on the northern edge of this dune. A majority were seen amongst sparse vegetation rather than barren areas.

It didn’t take long really to find them, as the adults were already out in encouragingly strong numbers. Of the several dozen adults we saw, all but one were seen atop the northern edge of one particular sparsely vegetated dune.  I suspect the larval burrows were at the bottom of the steep northern dune escarpment in the more stable wind-scoured sandstone clays that lay between individual dunes.  Vivid white and floating across the sand on long delicate legs, the elegance of their beauty was a stark contrast to the harshness of the surrounding landscape.  With a miniscule range of only 400 hectares, C. albissima is one of North America’s rarest tiger beetles, and I felt truly priviledged to join the small ranks of those who have seen this beetle alive in its native habitat and could appreciate the significance of the event.  Of course, the sense of accomplishment would not be complete unless I also succeeded in photographing the species in the field, and although the adults were quite wary and active, I was happy with several of the photos that I ended up with.  Similar to what I observed with C. arenicola, adults amongst the vegetation seemed slightly less skittish than those out in the open, so it was in the vegetated areas that I concentrated my efforts.  My only regret was not adding extension tubes to allow some real closeup portraiture, but the beetles seemed far too wary to have put up with the decrease in working distance that would have entailed.  At any rate, here are some of my favorites: 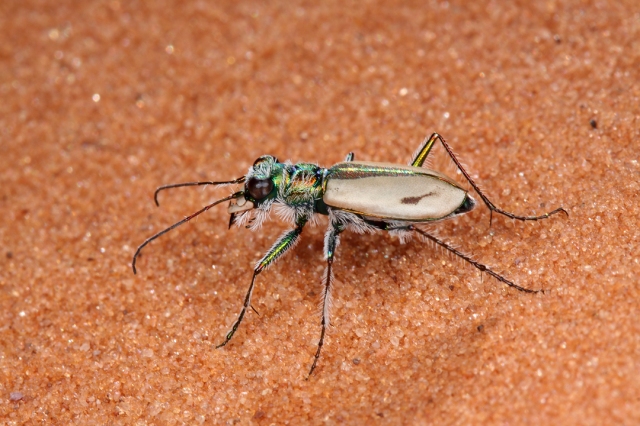 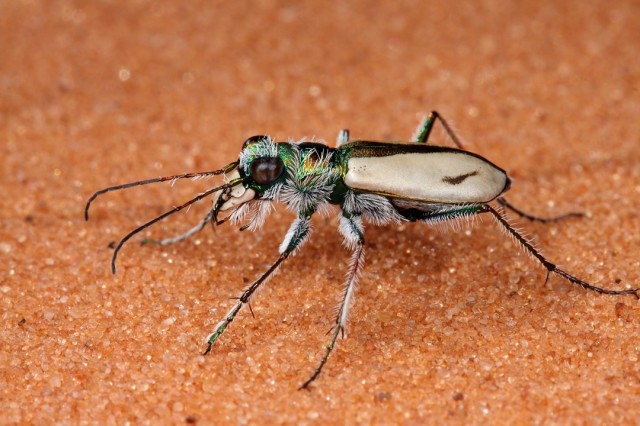 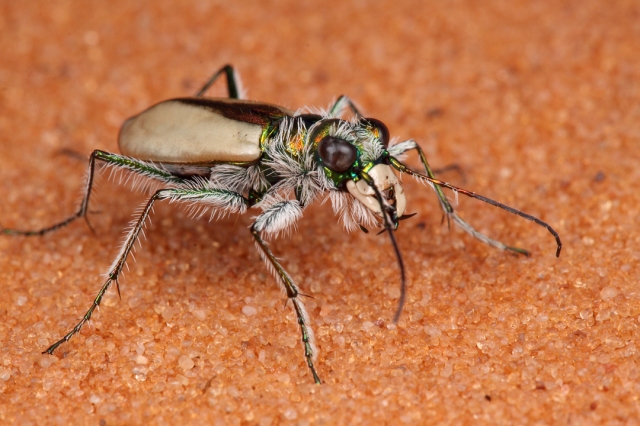 What the future holds for C. albissima remains unclear.  Designation of the beetle’s home range as a preserve (albeit tiny) would seem to offer long term protection, but a  large portion of this area is open to off-road vehicular traffic (although not a single one was seen during the time that we were there).  An even greater threat exists in the potential for extended drought affecting the entire population, and as greenhouse gases continue to accumulate in the atmosphere the chance of impacts from unusual weather events only grows. I feel lucky to be among the few that have witnessed this beautiful species in nature, but I sincerely hope I am not among the last.

ORV tracks can be seen just outside the conservation area boundary