After collecting Chrysobothris seminole at the type locality in Georgia and Chrysobothris orono the following day at South Cumberland State Park in Tennessee, I thought my trip last May with fellow buprestophiles Josh Basham and Nadeer Youseff was a complete success. I had collected two species of jewel beetles (family Buprestidae) that I had never collected before—not an easy thing for me to do in the eastern U.S. now after three decades of collecting, but little did I know that I would go on to collect three additional such species that same day. We had only seen two C. orono individuals after a fair bit of searching on the exposed roots of the Virginia pines (Pinus virginiana) growing along the blufftops, but I’ve learned to be tenacious and not give up too quickly when searching for rare species. 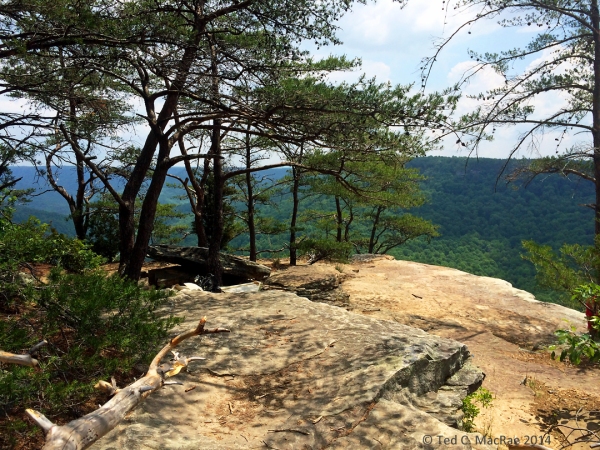 During my searches, I gave a lot of attention to one particular tree at the far end of the bluff—though it was alive and not showing any outward signs of distress, there was just something about it that made me think, “that’s a buprestid tree.” I don’t know if it was the sparsely limbed crown, the relatively smooth trunk with one side fully exposed to the sun, or just its lonely position at the edge of the bluff away from other trees (regretfully, I did not photograph the tree). At any rate, I checked it over every time I wandered down to that end of the bluff. During one of my inspections, I mentioned to Josh that I thought this tree looked good for buprestids, and as I did my eyes suddenly noticed a large individual in the genus Buprestis sitting on the trunk right in front of me. I grabbed it and yelled out to Josh what I’d found—I recognized it as a member of the subgenus Cypriacis but wasn’t sure about the species. Josh came over to take a look and immediately recognized it as B. strata. He mentioned that this was one of several other species besides C. orono that he and Nadeer have found before at this site. I told Josh that this was yet another species I’d never collected before (although I do have a specimen in my collection received in trade). The photos below were taken later that evening in the safety of the studio with the beetle on a piece of Virginia pine bark. This species is recognizable as a member of the subgenus Cypriacis by the elytra with alternate intervals depressed and heavily punctate, giving the beetle a strongly ribbed appearance—there are a few other species in this subgenus in northern and western North America. 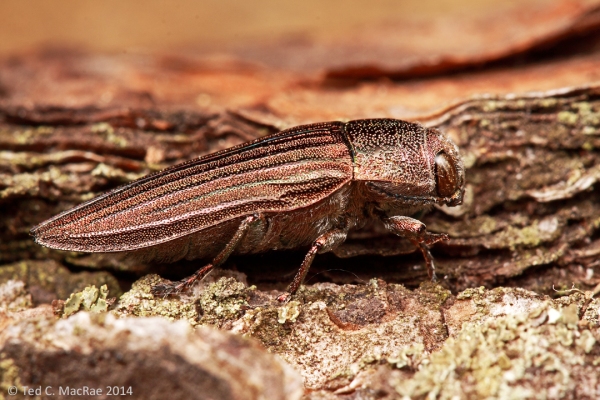 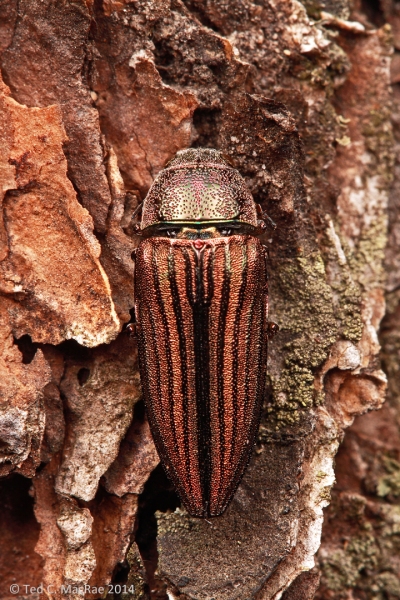 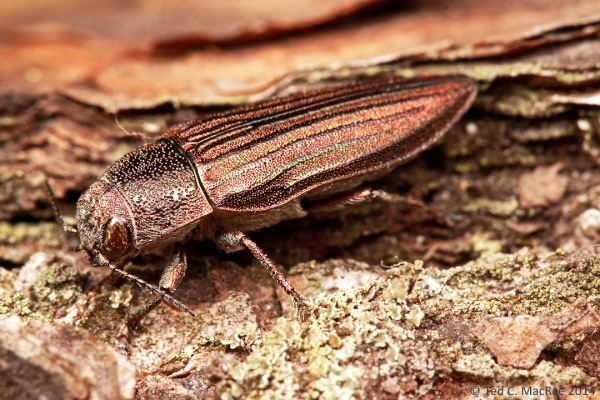 This find fueled another hour or so of continued searching of the pines, now not only for C. orono, but also for B. striata. As we continued to search, I queried Josh about the other species he had collected here. One that he mentioned that got my attention was Buprestis salisburyensis. I mentioned that not only had I never collected that species either, but that I’d never even seen it. Eventually I asked him what it looked like, and he went on to describe what sounded to me like an incredibly beautiful species—brilliant, metallic blue-green with bright red around the edges of the elytra. As he described the species, I began walking back towards the tree, and immediately I saw one sitting on the rock at the base of the tree. I yelled out, “There’s one!”, crept up slowly, and clamped my net over it (all of which was probably unnecessary—most Buprestis species are rather clumsy and easy to capture, unlike the comparatively zippy Chrysobothris). The photos shown here, like those of B. striata, were also taken later that evening indoors—even though I had found the beetle sitting on the rocks at the base of the tree I thought it would look more natural on Virginia pine bark. I also photographed the beetle on a needle clump, as this and other members of the subgenus Stereosa (recognizable by the large punctures of the elytra) have been beaten from needles of young. healthy pines (Helfer 1941). This makes perfect sense to me, given their coloration which could actually serve a cryptic function. 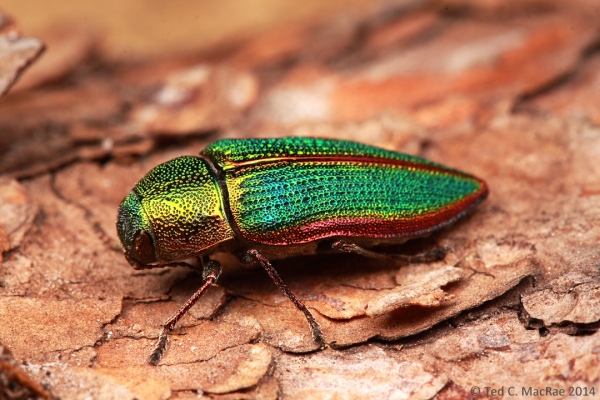 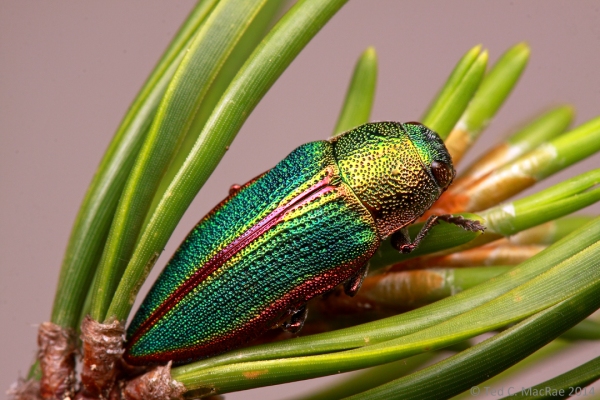 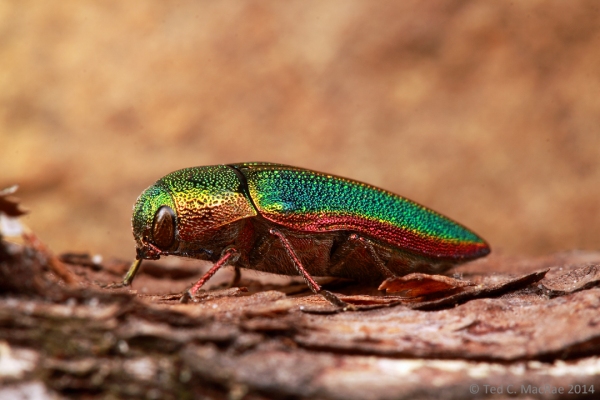 I mentioned a third species that I collected for the first time that day—after finishing at South Cumberland State Park, Josh took me to a spot where he had collected North America’s only coraebine buprestid, Eupristocerus cogitans. This species breeds in alder, and there was a sickly clump of alder trees next to a small lake. I looked at the tree, stuck my beating sheet under a branch and gave it a whack—there sat two individuals! I moved the sheet under another branch, gave it a whack, and there sat two more individuals! In my excitement of having collected this species for the first time (and my zeal to get even more), I completely forgot about making sure the vial I placed them in was not charged with ethyl acetate so that I could take photos later on. When I finally realized my mistake it was too late—the specimens were dead. I suppose I could have placed one on a branch and photographed it anyway, but with live individuals of Chrysobothris orono, Buprestis striata, and B. salisburyensis already in queue for photographs I opted to hope for a second chance someday.

6 thoughts on “The Buprestis tree”