I am an agricultural entomologist with a serious avocational interest in beetle taxonomy and biosystematics, especially woodboring beetles (families Buprestidae and Cerambycidae) and tiger beetles (family Cicindelidae). I have been interested in insects since early childhood and have collected them seriously since my junior year in college (when I took Entomology 201). I earned my B.S. in General Agriculture with emphasis in Entomology from the University of Missouri-Columbia in 1979, where I continued in graduate school conducting leafhopper life history and host preference studies. After earning my M.S. in Entomology in 1981, I worked with the Missouri Department of Agriculture as an Area Entomologist for eight years conducting insect surveys and working with nursery growers and greenhouse operators in east-central Missouri. It was during that time that my interest in beetles solidified, with woodboring beetles becoming a focus due to their significance in the nursery industry. That interest combined with my latent interest in taxonomy, leading me to conduct comprehensive surveys of the buprestid and cerambycid faunas of Missouri.

In 1990 I joined a startup microbial pesticide research and development company in California as a research entomologist, and five years later I moved to St. Louis for my present position. While my professional duties during this time have centered around developing sustainable and low-impact solutions for pest control in agriculture, my free time has been spent collecting and studying beetles. I have traveled extensively through many parts of the U.S. – especially the southwest – and southern Mexico, and I have also collected in Ecuador, Argentina, Brazil and South Africa. My private COLLECTION now contains ~75,000 specimens, and while a majority of the material represents species in the above groups of beetles, I maintain small yet significant holdings in a few other groups of insects as well. A large portion of the material in my collection has been obtained through rearing, in which infested wood is retrieved from the field and placed in emergence containers. This work has been useful for more fully understanding host plant associations and distributions and has even resulted in the discovery of some new species. More recent efforts have focused on the Buprestidae of southern Mexico and a faunal survey of the Cicindelidae of Missouri, with particular emphasis on elucidating the conservation status of selected species. Please visit my list of PUBLICATIONS to see the results of my work to this point. 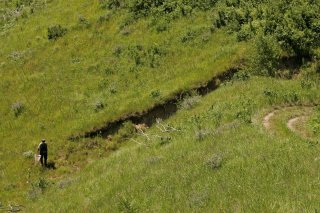 While entomology is my primary interest, I also enjoy studying other natural history subjects such as botany, ecology, geology, and paleontology. I started this blog in late 2007 as an outlet for my budding interest in nature photography and a more informal way to record my experiences and thoughts as an entomologist and natural historian. I believe that to be a truly competent natural historian, one must understand not only the elements of their chosen specialty, but also the natural systems of which they are a part. Thus, I write not only about insects, but also the plants on which they depend and the natural communities in which they occur, the landforms that harbor these communities, and my experiences in exploring these landscapes.

Disclaimer
The opinions expressed in this blog are solely those of the author and do not reflect the opinions of any institution or organization to which he belongs. Comments on individual posts are welcome, and please feel free to CONTACT me directly should you have any questions or feedback about the content at this site.