I’ve been walking the rows of soybean fields for many years now, and while it might seem that I would have very quickly seen all there was to see in terms of insects associated with the crop, this is not the case. The major players are almost always present—lepidopteran caterpillars such as velvetbean caterpillar (Anticarsia gemmatalis) and soybean looper (Chrysodeixis includens), and stink bugs such as southern green stink bug (Nezara viridula), red-banded stink bug (Piezodorus guildinii) and brown stink bugs (Euschistus spp.). However, numerous other insects can be found at one time or another—some of great importance from the perspective of the farmer producer but others with very little impact on the crop. During a tour of soybean fields in Mississippi this past September, I saw a large number of “signal flies”¹ (family Platystomatidae) on the foliage of the soybean plants that I presumed to represent the soybean nodule fly, Rivellia quadrifasciata.²

¹ I originally learned these to be “picture-winged flies”—a name now more commonly used to refer to members of the family Ulidiidae—which I learned as “Otitidae”!

² This species can be separated with certainty from the closely related and largely sympatric species R. colei only by examination of male genitalia (Namba 1956). Rivellia quadrifasciata is more common and widespread than R. colei and is the species cited in literature in association with soybean. 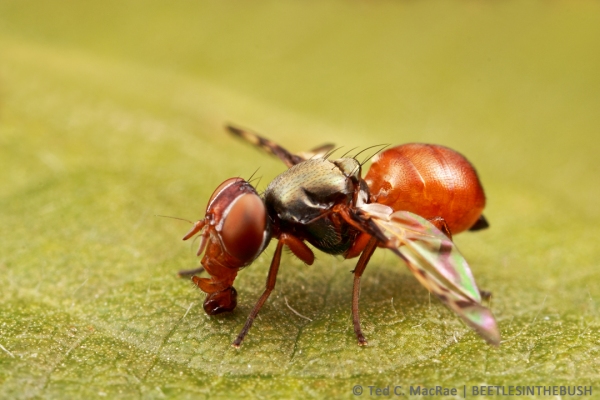 Rivellia quadrifasciata is widely distributed in the eastern U.S. where it originally fed probably on tick trefoil, Desmodium spp. (Foote et al. 1987), but has since adapted to soybean, Glycines max (Eastman & Wuensche 1977), and black locust, Robinia pseudoacacia (McMichael et al. 1990). Despite its relatively recent adaptation to soybean as a favored host plant, the species does not appear to cause much economic damage to the crop. The small, white, maggot-like larvae live in the soil and feed on the Rhizobium nodules of the roots that are used by the plant for nitrogen-fixation. Soybean, of course, is famous for its compensatory abilities and can withstand considerable nodule injury without yield impact, and as a result losses from this insect are considered minor (Heatherly & Hodges 1998). 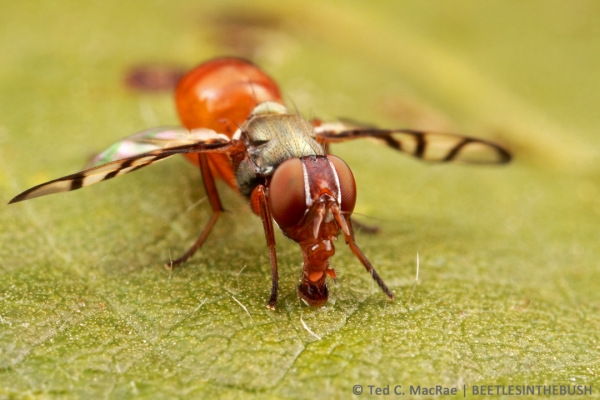 The wings of signal flies are almost always in constant motion.

Of more interest from a natural history perspective, these flies—like other members of the Platystomatidae—are almost always seen with their wings in a constant “waving” motion as they walk about on the host leaves. This seems clearly an intraspecific “signaling” behavior (and the source of the family’s common name), with the pattern of markings on the wings and the particular sequence of movements of the wings combining to provide species-specific signals for mate recruitment. Some Asian members of the family are famous for the remarkably elongated eye stalks of the males, which aid in intraspecific male-to-male combat behaviors that provide selection pressure for even more elongate eye stalks. Sadly, our North American species exhibit no such modifications of the head, but their strangely tubular mouthparts do give them the appearance of wearing a “gas mask.” 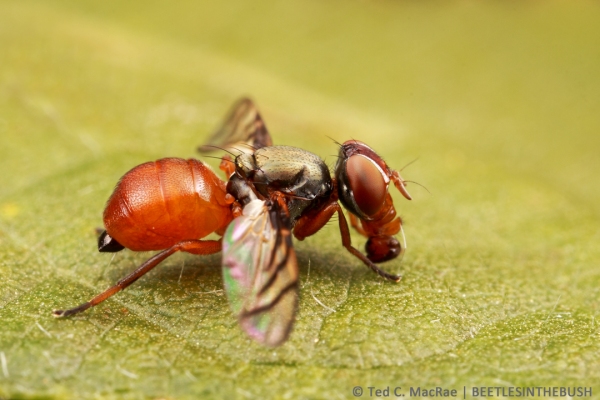 The strangely tubular mouthparts give adults the appearance of wearing a “gas mask.”

Information on the biology of adult platystomatids is limited, but a wide range of adult foods, e.g. nectar, honeydew, plant sap, bird droppings, and carrion, have been reported for this species, and R. quadrifasciata males have been observed to feed females globules of liquid during mating.

McMichael,  B. A., B. A. Foote & B. D. Bowker, B. D. 1990. Biology of Rivellia melliginis (Diptera: Platystomatidae), a consumer of the nitrogen-fixing root nodules of black locust (Leguminosae). Annals of the Entomological Society of America 83(5):967–974 [abstract].

Namba, R. 1956. A revision of the flies of the genus Rivellia (Otitidae, Diptera) of America north of Mexico. Proceedings of the U.S. National Museum 106:21–84 [Biodiversity Heritage]. 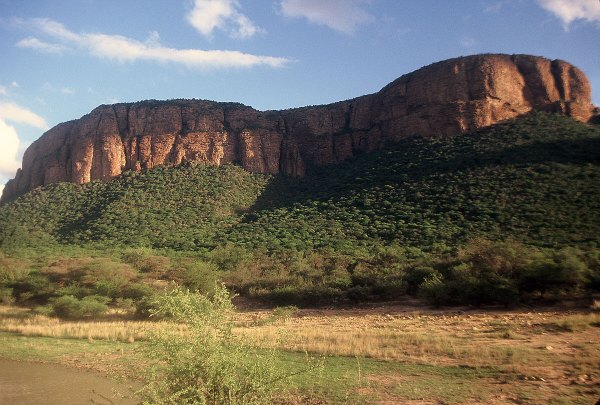 During our time at Geelhoutbos farm in South Africa’s Northern (now Limpopo) Province, we spent most of our time in the foothills below a magnificent north-facing escarpment of the Waterberg Mountain Range. We were here to collect Buprestidae (including the magnificent Evides, featured previously in this post), and it was in the low bushveld woodland where the greatest diversity of buprestids would be found. Many of the buprestids we encountered were associated with the acacias that abundantly dotted the landscape – especially the iconic “umbrella thorn” (Acacia tortilis) and “sweet thorn” (Acacia karoo), providing sustenance for everything from bitsy beetles (including our beloved buprestids) to giant giraffes. Still, I kept eyeing the mountains, yearning to clamber up on top of the billion year old massif for no other reason than because it was there. Chuck had the good sense to stay down below amongst the acacias and buprestids while I spent an afternoon winding my way up the escarpment in the company of our hostess, Susan Strauss. I didn’t collect many buprestids during that trek, and if success is measured solely by numbers of buprestids collected then Chuck won. But if success also includes the chance to see spectacularly endless vistas from an otherworldly landscape on a once in a lifetime trip, then I didn’t do too badly. 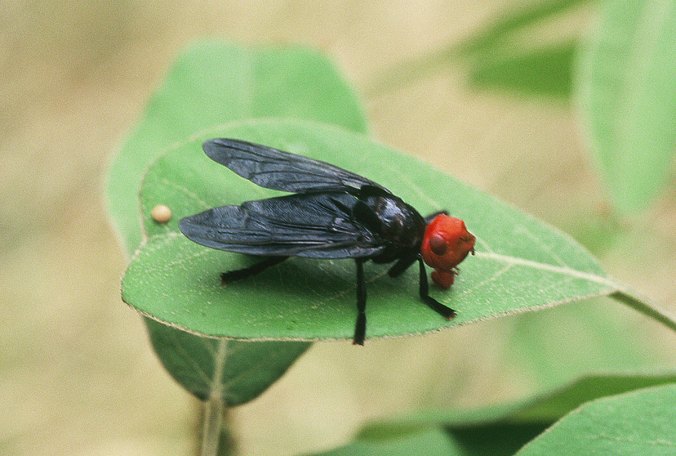 While I didn’t see many buprestids during that afternoon, I did see a few other insects interesting enough to attract my attention and maybe an attempt at a photo. This stunning fly was one of those insects. Even though it exceeded a full inch in length, it still wasn’t the largest fly I had ever seen. However, with its black body, metallic blue wings and large, round, wax-red head it was certainly among the most impressive. A quick scan through my recently acquired Field Guide to Insects of South Africa (Picker et al. 2002) has at last identified this fly as Bromophila caffra. It is a member of the family Platystomatidae, commonly known as signal flies and part of the great superfamily Tephritoidea of fruit fly fame (i.e., true fruit flies – not “the” fruit fly which belongs to the family Drosophilidae and which are more properly called vinegar flies).

Signal flies are interesting on several fronts, firstly because of their catholic tastes – Sivinski (1999) records rotting tree trunks, bulbs, roots and fruit, dried flowers and dead grass stems, dung and fungus as breeding sites, and notes – gruesomely – that mass graves dug in World War II sometimes produced huge numbers of the species Platystoma lugubre. It is some of the Australasian species, however, that have truly made a name for this family. In the tropical rainforests of Guinea and Queensland, males of many species exhibit modifications of their heads that are used in agonistic interactions with sexual rivals. These vary from broadening of the face into a surface used to push against the face of another male, to extremely well-developed stalk eyes used to gauge rival male’s size and strength in face to face combat.

But what about Bromophila caffra? Aside from being one of the most recognizable of flies in Africa, it’s sluggish disposition and apparent noxiousness were obvious even to early naturalists. Marshall (1902) noted the similarity of its coloration (black body, blue wings, red or yellow head) to that of two Pompilus spp. and one sphecid wasp with which it occurred sympatrically. Regarding its habits, he also noted:

The Bromophila fly is very plentiful; it is the most sluggish fly known to me, and settles about on trees and bushes in a very conspicuous manner. It ejects a yellow liquid from the mouth when handled, and was refused when offered to my baboons and Cercopithecus monkey.

Andrew Whittington, commenting on a photo of this species posted on DipteraInfo.com, provides further clues that seem to confirm the noxious qualities of this species, explaining not only its striking color and brazen habits but also the ease with which I obtained the above photograph:

Our knowledge of larval habits is very rudimentary. There appears to be an association with the roots of Terminalia trees (Combretaceae), from which the larvae sequester various toxic compounds (probably cyclic triterpenes) possibly for defense. This may render the adults toxic too, as a defense against predation – not a thoroughly tested hypothesis.
Adults are slow moving and ponderous … and photogenic!

I find it surprising that a large, strikingly distinctive, abundant insect such as Bromophila caffra should lack a common name, but it appears this is the case. None was given in Field Guide to Insects of South Africa, nor amongst the several South African wildlife and dipteran websites which I encountered featuring photos of this insect. In thinking about what common name Bromophila caffra could have, I can’t help but draw comparisons between this insect and the turkey vulture (Cathartes aura), or “buzzard,” of North America (despite their belonging to entirely separate phyla). Both species are among the larger members of their respective orders and make their living eating repulsive foodstuffs. Hulking black with naked, red, plastic-like heads, most predators regard them as too vile and noxious to bother with, leaving them free to pass their lives in unmolested disdain. With this in mind, I hereby propose “buzzard signal fly” as the official common name for this insect 😉

Additional photographs of Bromophila caffra can be seen at Joan Young’s fine blog, South African Photographs, and at Biodiversty Explorer, the web of life in Southern Africa. This is the fifth in a series of posts covering a natural history excursion to South Africa in November/December 1999. Click on “South Africa” under “Tags” to see links and summaries for other posts in this series.

Marshall, G. A. K. 1902. Five year’s observations and experiments (1896-1901) on the bionomics of South African insects, chiefly directed to the investigation of mimicry and warning colours. Transactions of the Entomological Society of London, 1902:287-584.