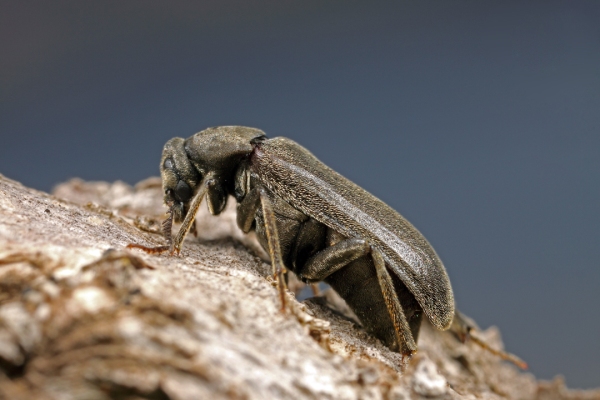 I’ve puzzled over the beetle in the above photo since I first saw it back in September on Day 2 of this year’s Annual Fall Tiger Beetle Trip. I encountered it on a dead branch of eastern red-cedar (Juniperus virginiana) on top of the main mesa at Gloss Mountain State Park in northwestern Oklahoma. At about 8 mm in length, it immediately struck me as possibly something in the family Ripiphoridae (wedge-shaped beetles). Still, the full-length elytra covering the abdomen made me doubt that identification, so I collected the specimen to get a better look at it when I returned home. Later that same day, while scanning the base of another mesa across the highway from the park at night, I came upon another individual that seemed to represent the same species—this time on a dead branch of fragrant sumac (Rhus aromatica). That individual is seen in the photo below, and two things are immediately apparent: 1) the beetle is a female in the act of oviposition, and 2) it is holding its elytra outstretched in a most curious way.

Another female oviposits on a dead branch of Rhus aromatica.

A quick browse through BugGuide’s ripiphorid images quickly showed a likely match with the genus Toposcopus, and consulting the original description of both the genus and its only included species—T. wrightii (LeConte 1868) showed agreement with the key diagnostic character (eyes divided into two lobes connected by a slender line of smooth, non-faceted corneous membrane). These two females differ from the male by their much less flabellate antennae (presumably the male uses these organs to detect female-emitted pheromones). LeConte described this species from New Mexico, and Rivnay (1929) also saw specimens from Texas and Arizona when he reviewed the North and Central American species of the family. Although the species is listed on Don Arnold’s Checklist of the Coleoptera of Oklahoma, the listing seems to be based only on the presence of specimens in the Oklahoma State University insect collection, while published records of its occurrence in the state are, as far as I can tell, still lacking. This species, thus, seems to be, along with Acmaeodera macra and Chrysobothris octocola (both family Buprestidae), an example of a typically southwestern U.S. species whose distribution extends northeast into the Red Hills Region of northwestern Oklahoma. Considering that Cylindera celeripes (Swift Tiger Beetle) and Amblycheila cylindriformis (Great Plains Giant Tiger Beetle) also have only recently been discovered in this area, it would seem that this part of the state is still undersampled and has the potential to yield additional interesting southwestern U.S. species. 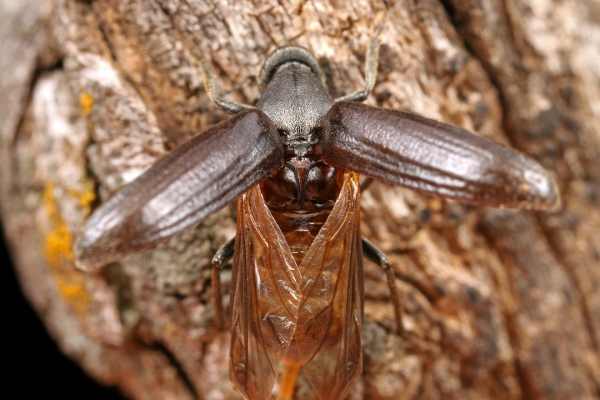 Why is this female holding her elytra outstretched while ovipositing?

Regarding the outstretched elytra, I’ve not seen this type of behavior before with a beetle in the act of oviposition. While several groups of insects in other orders may hold their forewings outstretched as part of threat displays, I’ve not seen a beetle hold its elytra outstretched for any reason at all other than flight and don’t recall seeing such behavior mentioned in the literature either. Thus, I’m at a loss to explain why the beetle is doing this. If you have any ideas I would love to hear them.

One thing that I enjoy immensely about 19th Century taxonomic literature is the rich, often effusive prose that frequently accompanies the descriptive portions of the text. (I also lament that such colorful writings are nearly universally frowned upon my modern editors. Perhaps as taxonomy advances more fully into electronic-only publishing the concerns about space will dissipate and taxonomic authors will no longer be constrained to such sterile, uniform, precisely formatted writings.) The naming of this species provides an especially colorful example of the embellishments permitted to 19th Century authors:

I desire in the name of this beautiful and interesting addition to our fauna, to commemorate the ability of Gen. W. W. Wright, the Chief Engineer and Commander of the Survey in which the species in the present memoir were collected. His attention to the comfort and safety of the party while traveling through a hostile Indian country will not soon be forgotten by any of his companions; while the skill with which the more difficult portions of the route were examined, and the labors of his assistants directed to the most easy methods of surmounting the difficulties, will commend itself to every admirer of correct engineering.

John L. LeConte is widely regarded as the father of North American coleopterology. I don’t think there is anybody from the 19th Century, save perhaps Charles Darwin, that I would have more liked to meet.

LeConte, J. L. 1868. New Coleoptera collected on the survey for the extension of the Union Pacific Railway, E. D. from Kansas to Fort Craig, New Mexico. Transactions of the American Entomological Society 2:49–59.

Rivnay, E. 1929. Revision of the Rhipiphoridae of North and Central America (Coleoptera). Memoirs of the American Entomological Society 6:1–67, 3 plates.