Ever since I saw Chris Grinter’s beautiful photographs, I have wanted to see (and possibly photograph) the tiny little moths known as fairy moths (family Adelidae, formerly considered a subfamily of Incurvariidae). These dainty, delicate, little moths are characterized by their unusually long antennae—especially the males, which can have their antennae up to three times the length of the forewings. This past April I got my wish as my father and I hiked the Shut-ins Trail at Sam A. Baker State Park in Missouri’s southeastern Ozark Highlands. 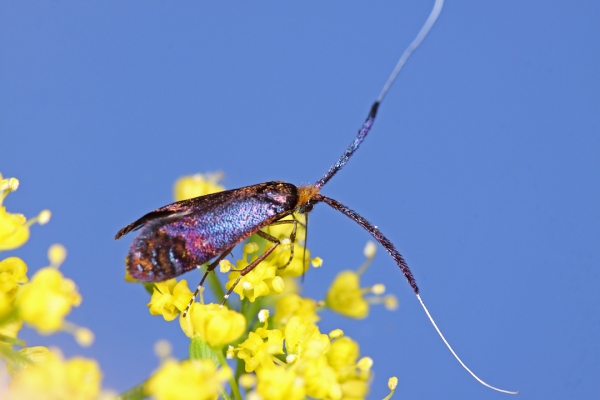 Females have the antennae ”only” twice as long as the forewings…

Chris was fortunate to see a number of individuals representing at least two species, presumably all males (based on the extraordinary length of their antennae) that were engaged in some rather interesting territorial behaviors. I, on the other hand, saw only this single individual (presumably a female) who seemed content enough to calmly nectar the golden Alexander, Zizia aurea (Apiaceae), flowers on which I found it. This was fine by me, as the dense woodland setting where I saw it wasn’t very conducive to photographing the moth. I wanted a clean, bright background to highlight the moths dark metallic luster, so I snipped the flower (carefully!) on which the moth was nectaring and held it up to the small patch of bright blue sky visible from the trail to take these photos.

…and the basal half distinctly thickened.

I presume this individual represents the species Adela caerueleella based on comparison with online photos. According to Powell (1969) this species is widespread across the eastern U.S. and has been recorded on flowers of American bittersweet, Celastrus scandens (Celastraceae). Microleps.org notes the species is most frequently found along deciduous forest trails and shows a preference for flowers of black snakeroot, Sanicula marilandica (Apiaceae). My late April observation is consistent with the April and May activity period noted by Powell (1969) and late May period for central Illinois noted by Microleps.org.

Powell, J. A. 1969. A synopsis of Nearctic adelid moths, with descriptions of new species (Incurvariidae). Journal of the Lepidopterists’ Society 23:211–240.