This past Tuesday was my birthday, and as I have done for my entire adult life I took the day off and went on my traditional “Season-Opener-Bug-Collecting-Trip”. In the past I’ve usually just had one friend go with me, but today I had three—Rich, Chris, and Bill!

We started off by heading south about 3½ hours to Tingler Prairie Natural Area in Howell Co.. I wanted to come here because: 1) it was a place I’d never visited before, and 2) there is a population here of the endemic Ozark trillium (Trillium viridescens) that I thought might be in bloom. Rain in the forecast and a patch of the real thing on the way down had us a little worried, but the day turned out spectacular with temps climbing to 80°F and skies partly to mostly sunny.

We never did find the trillium—even calling another friend (Casey), who had seen them here before to find out exactly where he saw them. Turns out we hit the right spot, but apparently we were too early, especially given how late spring has been moving along this year. Nevertheless, we still found much to capture our interest, including a yellow-bellied racer (Coluber constrictor flaviventris)—too quick for photos—and a black rat snake (Pantherophis obsoletus) that coiled up nicely under the end of a fallen log and tolerated my prodding and “cleaning” of the scene around him to get some good photos (albeit, only with the iPhone).

The “cloudy” eye is actually an artifact of the flash lighting reflected by the retina.

Unfortunately, insect activity was very light. We saw no tiger beetles and only the earliest spring forms of most other insects. I took about 10 specimens each of the early-spring jewel beetles Acmaeodera tubulus and Pachyschelus purpureus, which I found on flowers and foliage (respectively) of wild geranium, Geranium maculatum. It was the first time that I’d found the latter as abundant as this, so the series of specimens will be a welcome addition to my cabinet. I also took a couple of A. tubulus on a flower of violet wood sorrel, Oxalis violacea and showed the others the characteristic end of an oak twig pruned by a twig pruner (Anelaphus parallelus) larvae (and revealed the culprit for them to see). Despite the paucity of insects, it was a beautiful and high-quality spot, and I look forward to collecting here again sometime when the season is more advanced.

Twig pruner, Anelaphus parallelus, larva cut from its gallery near the base of a pruned oak twig.

Revealing the culprit while Chris takes notes on some of the birds he’s been hearing. 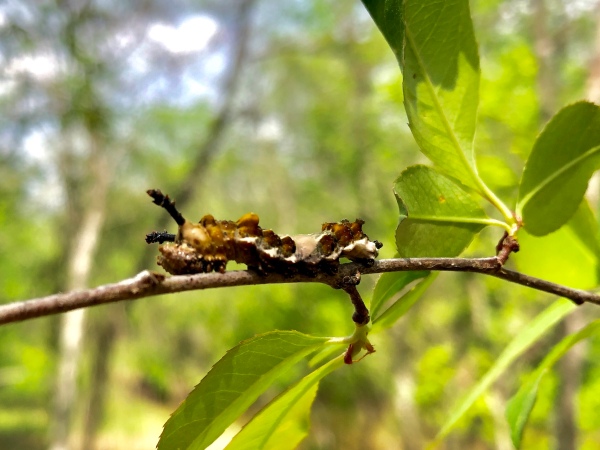 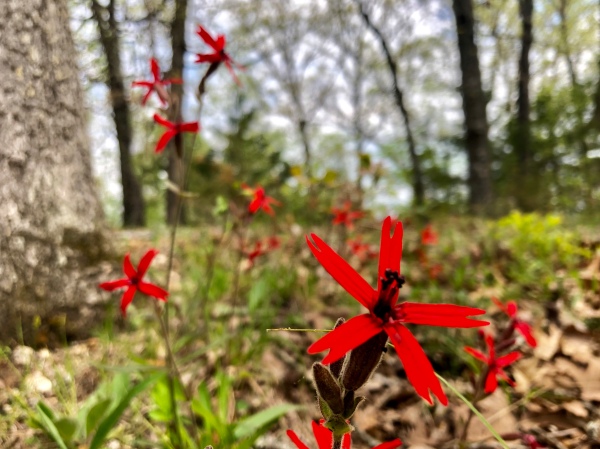 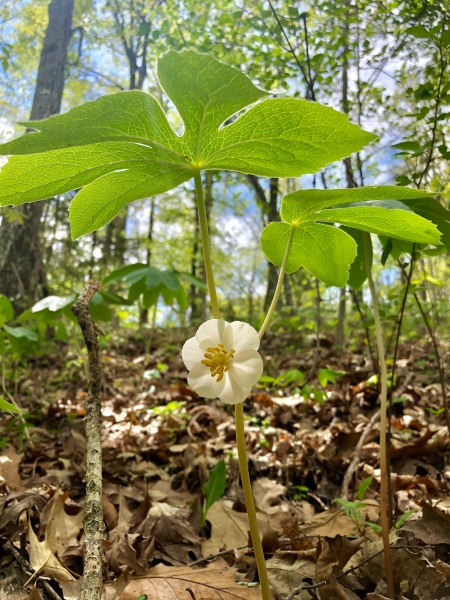 Mayapple, Podophyllum peltatum (family Berberidaceae) prefers the rich, more mesic hillsides (this is where we expected Trillium viridescens to occur).

After finishing up at Tingler Prairie, we drove east an hour and bushwhacked over rough Forest Service 2-track to Bald Hill Glade Natural Area in Ripley Co. It had been close to 10 years since my previous visit, but I remembered the roads well. We had to park, however, about a mile from the entrance to the glade due to fallen trees across the final stretch 2-track. The landscape had changed considerably since my last visit—gone was the dense, close forest lining the 2-track, and in its place stood open woodland brought to this condition by active management that included the use of prescribed burning apparently as recently as the past season. 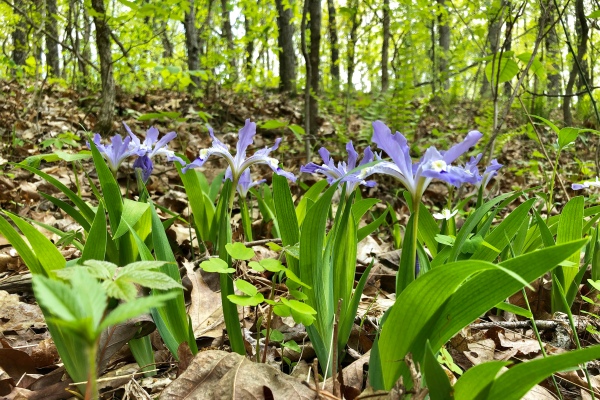 These diminutive plants are distinguished from other members of the genus by their short stature and sepals with midline beards.

After hoofing through the forest we reached the glade and found a beautiful—if somewhat sterile—scene before us. The recent burn included not only the woodland but also the glade itself, and no unburned refugia could be found anywhere. Floristically, this is beneficial for the glade, which needs periodic fire to prevent woody encroachment, but in my experience such burns also result in severely depressed insect populations for years afterwards. It takes time for the insects to find and recolonize the glade, and in this case the lack of unburned refugia will only increase the amount of time that will be needed for the insect populations to recover.

Nevertheless, we enjoyed our hike through the area, watched and listened to the calls and songs of a number of cool birds, including summer tanagers, indigo buntings, blue-gray gnatcatchers, and—a first for me—the splendidly yellow prairie warbler. We also took photographs of the glade and some of its plants (with the big camera), and on the way back to the car we found several of the Polistes wasp-mimicking light flies, Pyrgota undata (family Pyrgotidae). Interestingly, all were mating pairs, and the ones we observed closely (as we photographed them with the big camera) were engaged in a most curious “French kissing” behavior. I can’t wait to read up more on this when I prepare to post the photos of this behavior. 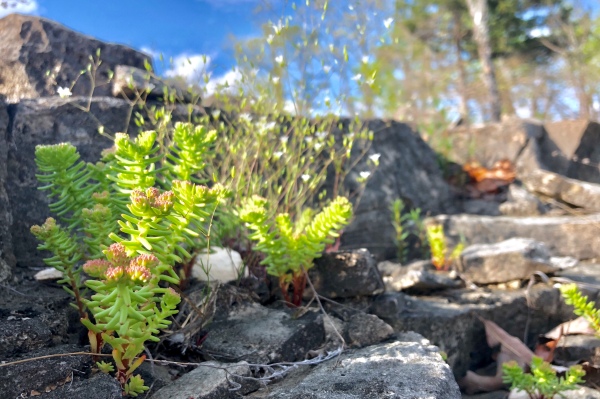 Eventually, impending dusk signaled a close to the day, and after driving east another 1½ hours to have pizza dinner in Poplar Bluff we made the long drive back to St. Louis (arriving at my home at 12:30 a.m.!).

NOTE: All photos in this post were taken and processed with an iPhone X. The “real” photos taken with our “real” cameras will be shared as they become available.