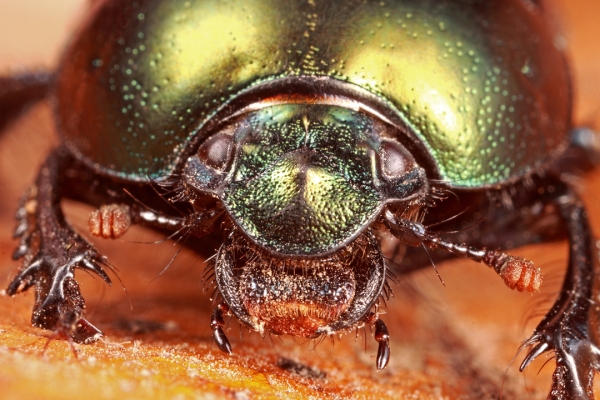 Okay, I know this isn’t a true dung beetle, but this earth-boring scarab (family Geotrupidae) is close enough that I’ll take the opportunity to use one of my favorite dung beetle jokes.¹ This is one of several individuals that I saw on a late October hike along the North Fork Section of the Ozark Trail in extreme south-central Missouri (just a few miles north of the Arkansas border). I regard these beetles to represent the species Geotrupes splendidus based on the punctured elytral striae, sutural striae ending at the scutellum, bright green coloration, and obvious punctures in the lateral areas of the pronotum. Of the half dozen adults that I saw during the day, all were found singly on animal dung or on the ground nearby.  This was the most abundantly I’ve ever seen this species—up to that point I’d accumulated only a handful of specimens, always on mild days in late fall or early winter in association with animal dung on trails through high quality woodlands. The timing and circumstance is also true for Geotrupes blackburnii, the only other species in the genus that I have collected in Missouri—albeit much more commonly and abundantly than G. splendidus and easily distinguished from that species by its slightly smaller size, nearly impunctate pronotum and all black coloration.

¹ By the way, I don’t recall the provenance of that joke, other than I saw it as a one-frame cartoon, featuring two entomologists talking to each other, posted on a Department of Entomology door while I was in graduate school—way back in the early 1980s. If you know please tell me!

An interesting contrast between this species and true dung beetles (scarabs in the subfamily Scarabaeinae and representing such genera as Copris, Phanaeus, Canthon, Onthophagus, etc.) is the fact that while this species can and does utilize dung for both larval development and adult feeding, it is not the preferred food. Rather, adults are more often found feeding on fungus, and leaf litter—tightly packed by the adult at the end of a burrow in the soil, is most often used for larval development (Howden 1055). This does not seem to be a universal feature of the genus, as the common Missouri species, G. blackburnii, does seem to prefer dung for larval development. This is not to say that either species is exclusive in its preference—both seem to be more flexible in food choice than the true dung beetles, but in reality the larval biology of a great many species in this and other genera of the family remain unknown. 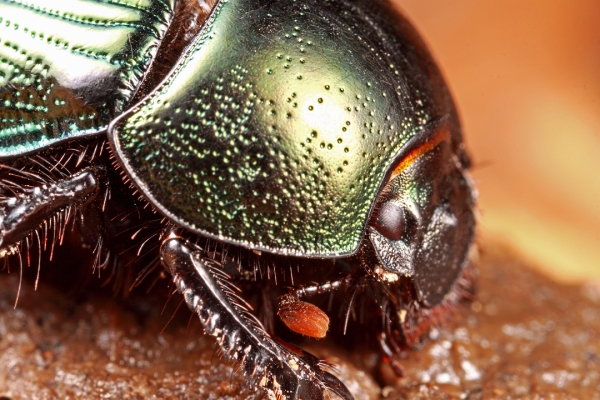 The opinion of scarab expert would be most helpful at this point. This species is broadly distributed across eastern North America, with eastern populations generally brighter green and western populations (e.g., here in Missouri) more often yellow-green with golden or reddish hints but ranging to dark purple. In fact, all but one of the Missouri specimens in my collection are dark purple, the other being green similar to the six beetles I saw on this date. Howden (1955) recognized the western forms as a separate subspecies, G. splendidus miarophagus (originally described as the species G. miarophagus by Thomas Say). These two subspecies are listed as valid in the recent checklist of Nearctic Scarabaeoidea (Smith 2003), and the specimens in my collection from Missouri are labeled as such by scarab expert Bill Warner. Despite this, most other sources I’ve checked—including BugGuide—list G. miarophagus as a synonym of G. splendidus. Color alone—especially when it is as variable as in this species—seems weak justification for subspecific distinction. Howden (1955) mentions a curious case of G. s. miarophagus utilizing fresh grass clippings for larval development; however, it is difficult to imagine this as anything more than just a very recent adaptation. If there are other reasons supporting subspecific distinction besides deference to Henry Howden, I’d be interested in knowing what they are.

Howden, H. F. 1955. Biology and taxonomy of North American beetles of the subfamily Geotrupinae with revisions of the genera Bolbocerosoma, Eucanthus, Geotrupes and Peltotrupes (Scarabaeidae). Proceedings of the United States National Museum 104:151–319.

Smith, A. B. T. 2003. Checklist of the Scarabaeoidea of the Nearctic Realm. Version 3. Electronically published, Lincoln, Nebraska. 74 pp.