Hmm, something funny going on here.  This is a bug blog – specifically a beetle blog, yet it’s a post about a lizard that generates a flurry of comments.  I don’t know if lightning will strike twice so quickly, but I did have this second ‘lizard’ post already lined up in the queue.

The day after seeing a couple of male eastern collared lizards at Four Canyon Preserve in northwestern Oklahoma, I got my second saurian treat with this horned lizard (genus Phrynosoma).  There are actually some dozen species of horned lizards in North America, but the majority are found further west in the U.S. and down into Mexico and Central America.  Of the two that occur in Oklahoma, this particular individual can be identified as a Texas horned lizard (P. cornutum) by the two occipital (back of the head) spines, presence of lateral abdominal finge scales, and dorsal white stripe.  Oklahoma’s other horned lizard (round-tailed horned lizard, P. modestum) is restricted to the northwestern corner of the panhandle and differs from the Texas horned lizard by having four occipital spines, lacking lateral abdominal fringe scales, and more solid pale coloration. 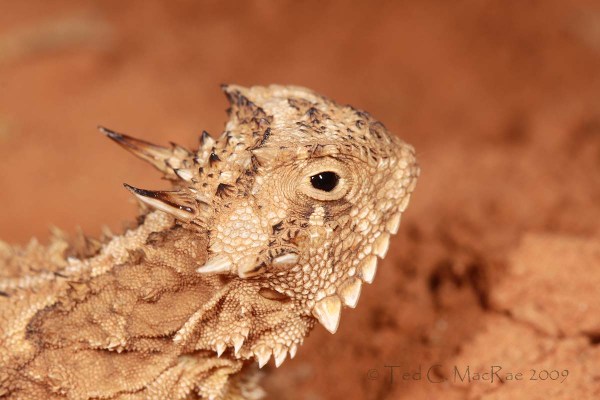 Again, my claim of “most bizarre” might be open to debate, as there are certainly many bizarre lizards in North America.  The gila monster once more comes to mind, but I think grotesque is a better descriptor for that animal, and the fan-shaped toe pads of geckos might also get them some votes.  Nevertheless, do a Google search on the phrase “bizarre North American lizard” and the results will be overwhelmingly dominated by references to horned lizards.  It’s no surprise – their squat body form is more suggestive of toads than lizards¹, for which they are commonly called “horned toads” or “horny toads,” and their covering of “horns” (actually modified scales) gives them an otherworldly, almost dinosaurian appearance.  Who among my generation wasn’t terrorized by the sight of these lizards, cheaply magnified, as they threatened the scientists that encountered them in the 60’s sci-fi classic The Lost World?

¹ Even the genus name, derived from the Greek words phrynos (toad) and soma (body), alludes to its toad-like appearance.

In reality, these lizards are anything but terrifying.  Instead they employ multiple strategies to avoid being eaten themselves. These adaptations were all on display as I initially passed this individual without even noticing it lying motionless in the middle of the road. Once I had passed I noted movement out of the corner of my eye and turned to see it scurrying towards the vegetation along the side of the road. It’s mottled coloration, blending well with its background, and spine-broken silhouette made it almost invisible. Feeling threatened by my too-close approach, it made a rapid burst for cover, but I cut it off at the pass and blocked its erratic scampers towards the roadside to keep it out in the open so I could take some photographs. Once cornered in the open, it resorted to a third strategy – puffing of the body to make it appear larger. Had I been a true predator, it would’ve had two more strategies up its sleeve that it could have employed as a last resort – bleeding from the eyes (which apparently has a foul taste and will cause a predator to drop the lizard from its mouth) along with the mechanical defense of its hard, spiny scales. Since I didn’t actually try to eat this little guy, I didn’t have a chance to experience these final lines of defense.

The photos here actually represent two individuals – the middle picture is a second lizard that suddenly appeared while I was photographing the first.  The second individual was somewhat smaller than the first and not as boldy marked (note the lack of a distinct dark stripe behind the eye).  Whether these were male and female is difficult to say – horned lizards lack outward sexual characters allow them to be easily distinguished in the field (females do tend to grow a little bit larger). While not threatened or endangered, Texas horned lizards, like many other horned lizard species, have experienced dramatic reductions in its range. Oklahoma has a year-round closed season for both species that makes it illegal to kill or capture horned lizards without written permission. I would see a few more of these fascinating little lizards during my three days at Four Canyon Preserve, suggesting that, at least in this part of the state, horned lizards are doing just fine.