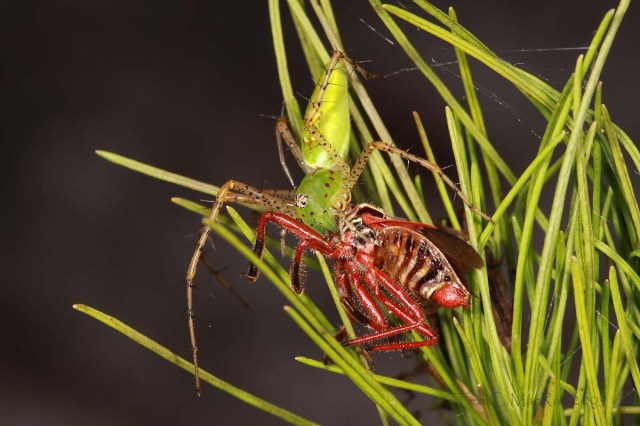 I came upon this interesting scene last month while hiking through Allen David Broussard Catfish Creek Preserve State Park, which preserves some of the highest quality remnants of sand scrub habitat on the Lake Wales Ridge of central Florida. The spider seems to be Peucetia viridans (green lynx spider), widespread across the southern U.S. and distinguished by its bright transparent green color with red spots and black spines (Emerton 1961). These largest of North American lynx spiders hunt diurnally on low shrubs with an agility excelled only by the jumping spiders (Salticidae) and aggressively attack their insect prey. In this case, the prey is one of the so-called “bee assassins” of the genus Apiomerus (Hemiptera: Reduviidae). The common and generic names of these insects both derive from their habit of preying upon bees, not only on flowers but also by ambushing them at nest entrances, although other insects are preyed upon as well. Ironically, this particular assassin himself got ate.

An interesting situation was uncovered while I tried to determine which species of Apiomerus was represented by the prey. By virtue of its pale ventrals with the front and hind margins black, it keys to A. spissipes in a literature-based key to Florida Reduviidae (Bierle et al. 2002) – one of two species considered widely distributed across the eastern U.S. In reality, however, it appears that this individual represents another species named almost 30 years ago but which remains officially undescribed. As explained in this BugGuide post by Daniel Swanson, the genus was revised by Berkeley grad student Sigurd Leopold Szerlip in partial fulfillment of the requirements for a Ph.D., who proposed a number of taxonomic acts including the description of 19 new species. Among these were eastern U.S. populations to which the name A. spissipes had been applied, with those in Florida being described as the new species “A. floridensis“. However, dissertations do not meet the criteria of publication according to Article 8 of the International Code of Zoological Nomenclature (ICZN 1999), and none of the dissertation was formally published. Thus, “A. floridensis” remains an invalid, unpublished name.  This is a most unfortunate situation, as Swanson considers the dissertation to be well done.  It is not only names, but important information about life histories and detailed genitalic studies that remain unavailable to the scientific community as well.  What are the nomenclatural impacts of this work remaining unpublished?  Is this as much a failure by the advising professor as by Szerlip himself?  What ethical considerations would need to be addressed in order for it to be published in absentia, or is this even possible?