In my previous post, I showed some photographs of the larva of an undetermined species of tiger beetle that I collected from its burrow in dry ground adjacent to a coastal salt marsh near St. Petersburg, Florida. I had assumed the larva belonged to the genus Cicindela or one of its former subgenera and was suprised to learn that this assumption was incorrect when the adult emerged 2 months later. Looking back at the photos, however, I realized that the photos and the information I gave regarding its location and habitat contained all of the necessary information to identify this larva. Five points to Mike Baker, who correctly deduced the genus (Tetracha), and in fact the larva represents Tetracha floridana (Florida metallic tiger beetle).

The larva can be placed in the genus Tetracha by virtue of its simple, thorn-like hooks (in other eastern U.S. tiger beetle genera, the outer hooks are distinctly curved).  Two other genera of Nearctic tiger beetles that do not occur in Florida also bear simple hooks—Omus (Night-stalking Tiger Beetles, occurring along the Pacific Coast) and Amblychelia (Giant Tiger Beetles, occurring in the central and southwestern U.S.); however, the former bears three rather than two pairs of hooks, and the latter has the inner and outer hooks distinctly separated from each other. 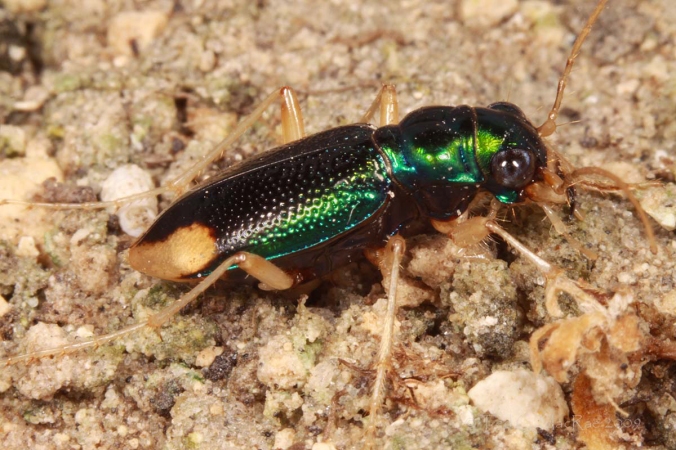 Four species of Tetracha occur in the U.S., three of which occur in Florida—T. carolina (Pan-American Big-headed Tiger Beetle), T. floridana (Florida Metallic Tiger Beetle), and T. virginica (Virginia Big-headed Tiger Beetle).  However, T. carolina is restricted in the state to the panhandle and interior of the peninsula along rivers and in disturbed sparsely vegetated areas (Choate 2006).  Of the two remaining species, T. virginica is widespread throughout the southern two-thirds of the eastern U.S. and occurs in a variety of habitats (Pearson et al. 2006), while T. floridana is restricted to salt marsh and mud flat habitats along the Gulf coast of Florida from Dixie County south to the Keys (Choate 2006).  While the widespread occurrence and generalist tendencies of T. virginica might suggest that it is the more likely choice, the locality and habitat match precisely with T. floridana. 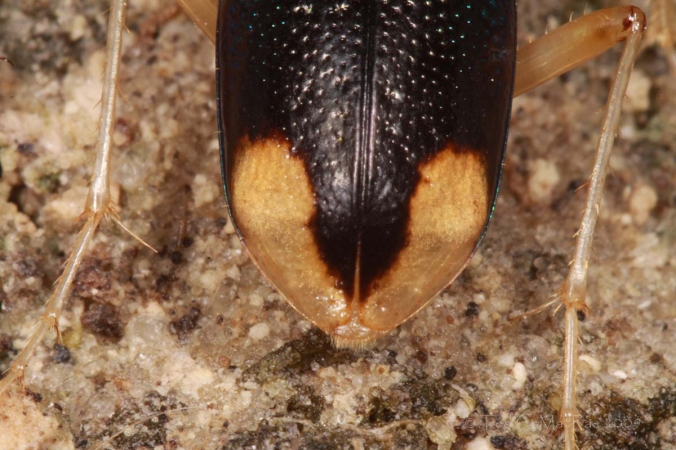 The anterior lobes of the apical lunules are divergent.

Tetracha floridana is very similar to T. carolina and was long considered a subspecies of that more widely distributed species until Naviaux (2007) elevated it to species rank in his revision of this large genus.  Tetracha floridana is distinguished from T. carolina by the divergent anterior lobes of the apical lunules (photo above) and the uniformly black to dark green elytra that lack any violet or coppery reflections in the anteriolateral regions (photo below) (Choate 2003). 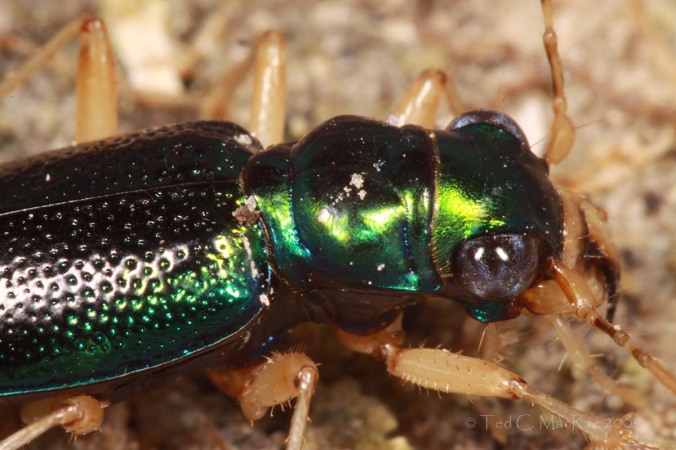 The anteriolateral areas of the elytra lack violet or copper reflections.

I was happy as heck when I saw the first newly emerged adult in the rearing container, as this is a true Florida endemic.  I have encountered the two other eastern U.S. species commonly under street lamps and at building lights here in Missouri—T. virginica throughout the state and T. carolina in the southeastern lowlands, where it appears to reach its northern limit of distribution.  A fourth U.S. species in the genus, T. impressa (Upland Metallic Tiger Beetle) (T. “affinis” in earlier works), occurs in northern Mexico and the Lower Rio Grande Valley (LRGV) of south Texas (Erwin and Pearson 2008).  Although I have not yet encountered it on any of my many trips to the LRGV (all of which pre-date my current cicindelophily), I understand it is regularly attracted to building and street lights in Brownsville (Pearson et al. 2006).  I believe I will have to go down there again and verify this for myself someday. 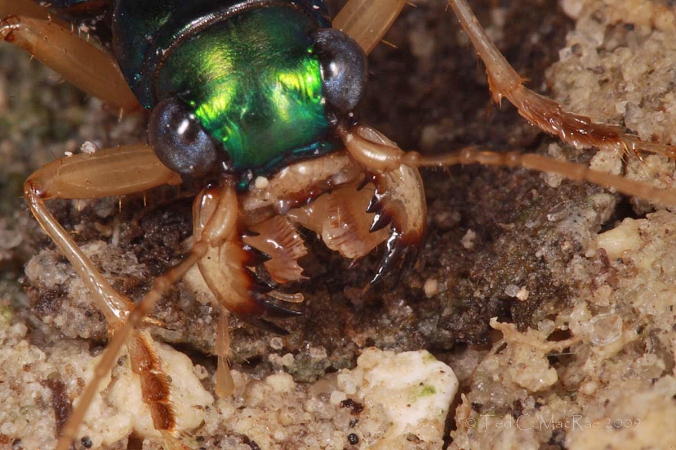 Feasting on a corn rootworm larva.

The last photo in this series illustrates the unique feeding behavior of these beetles, which despite their terrifyingly toothy mandibles are strictly fluid feeders.  The long, sharp mandibular teeth function primarily in prey subdual and in slicing and shredding their tissues, while the maxillae (second pair of feeding appendages behind the mandibles) and labium (fused third pair of appendages) comprise an “oral mill” that masticates the prey and and rolls it into a bolus.  Two brush-like structures can be seen behind the mandibles in the photo above—these are part of the maxillary laciniae and apparently function in containing and shaping the bolus as it is being masticated.  While this occurs, proteolytic enzymes are extruded from the midgut and mixed with the bolus to liquify its digestible components, which are then sucked into the beetles tiny mouth by the action of a pharyngeal pump.  Like the larva, the adult beetle thus “chews” but does not swallow its prey—a manner of feeding that is not too unlike that of spiders and other arachnids (sans the venom).