As my friend Rich and I stood in the verdent understory admiring the spectacular panicles of red buckeye punctuating the green lushness, a small brown flower on a leafless branch above me caught my eye.  “Pawpaw!” I exclaimed, perhaps partly in amazement that it took us awhile to notice the trees that were, in fact, all around us.  Pawpaw (Asimina triloba) is a member of the only temperate genus in the otherwise exclusively tropical and subtropical family Annonaceae (Custard Apple Family).  Although not nearly as restricted in occurrence in Missouri as the red buckeyes with which they were growing, they are nevertheless always a treat to see. Scattered throughout the state, they can be found growing in bottomland forests, ravines in mesic upland forests, along woodland streams, and at bases of bluffs (Yatskievych 2006).

Pawpaws are, of course, famous for their large edible fruits, sometimes called Indian bananas, Missouri bananas, Michigan bananas, [insert eastern state here] bananas, etc.  Technically, however, the pawpaw fruit is a berry, since it is derived from a single pistil and has multiple seeds embedded within the pulpy matrix.  I’ve not tried the fruit myself, not for lack of desire but rather an inability to find them when they ripen in fall before the birds and mammals get to them.  Some effort has been made to cultivate the plant for fruit production, but low fruit set seems to be a persistent problem due to reproductive self-incompatibility. 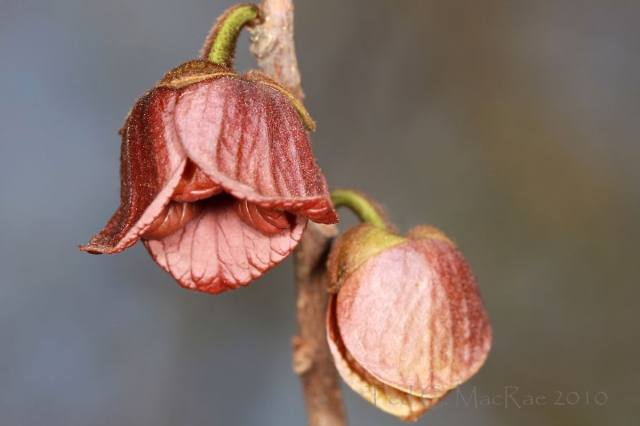 Pawpaw also famously serves as the larval food plant for the zebra swallowtail butterfly, Eurytides marcellus (family Papilionidae).  Beyond this, however, there seem to be not many insects associated with the plant.  I have collected dead wood of pawpaw in an effort to determine the species of wood-boring beetle species that are associated with it.  The only species I’ve reared is the longhorned beetle, Elaphidion mucronatum (whose common name “spined oak borer” belies the fact that it is one of the most polyphagous of all North American species), and two other longhorned beetles, Eupogonius pauper and Urgleptes querci (also highly polyphagous), have also been reported being reared from dead wood of this plant.  I have not associated any jewel beetles with pawpaw, nor have any such associations been reported in the literature.  It would appear that woodboring beetles are not fond of the soft, weak wood of pawpaw, perhaps due to the plant’s annonaceous acetogenins with known pesticidal qualities (Ratnayake et al. 1993) (acetogenins are also under investigation as anti-cancer drugs).  Other poisonous compounds, chiefly alkaloids, are found in various parts of the plant, especially the seeds and bark, and likely play a role in herbivore defense. Insect pollinators also seem to be infrequent, as I have not noted any insects on its flowers. Most members of the family are pollinated by beetles (Yatskievych 2006), but the meat-colored, downward-facing, not-so-sweet-smelling flowers of pawpaw suggest pollination by flies, perhaps those attracted to carrion.