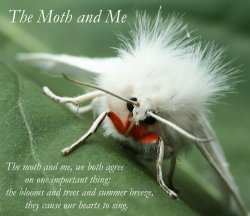 Welcome to issue #11 of The Moth and Me, the monthly carnival devoted to the “forgotten” lepidopterans. Most people – even entomologists – regard these as the lesser leps, denizens of the night, as if to hide their somber-colored drabness from the flashy brilliance of their rhopaloceran relatives. Of course, this simply isn’t true, as the contributions to this month’s issue well demonstrate. Butterflies may be among the largest insects on earth, but the largest lepidopteran in the world is a moth. They may also be as gaudily colored as the rainbow itself, but what butterfly is more colorful than the Urania day-flying moths (the genus name literally means, “The heavenly one”).   And, they may be almost universally accepted by a largely insect-indifferent public, but who among us does not think back to that first sight of a luna moth as the most stunning insect we had ever seen to that point.  Yes, moths are all that butterflies are, and for this month’s issue of TMaM, 15 contributions by nine writer’s show us why.

Luna moths belong to the royal moths of the family Saturniidae, and as the name implies they are not the only stunningly beautiful member of the group. Kristen at Tales from the Butterfly Garden: Lepcurious writes about an encounter with the Sweetbay Silkmoth (Callosamia securifera).  Like other members of the family, larvae of this species are rather particular about the type of tree that they utilize for food, which in the case of this moth is sweetbay (Magnolia virginiana).  I’m a little too far north here in Missouri for this tree, so I have never seen this moth.  However, I have seen (and reared) some of its close relatives, the Promethia Silkmoth (Callosamia promethea) which hosts on several plant species and the Tulip-tree Silkmoth (Callosamia angulifera) which hosts on Tulip Tree (Liliodendron tulipifera).

Jason Hogle at xenogere is fond of the unusual and has a gift for finding it. In his post The Unmoth, Jason shows us a male grapeleaf skeletonizer (Harrisina americana) – not your typical moth!, The uniformly black color and bright red neck collar just screams “Don’t eat me – I’m poisonous”, and indeed species in this family are among the few insects capable of producing hydrogen cyanide!  As the name suggests, larvae skeletonize the leaves of both wild and cultivated grapes (Vitis spp.), as well as the related Virginia creeper (Parthenocissus quinquefolia).

Royal moths are not the only stunningly colored moths that Kristen at Tales from the Butterfly Garden: Lepcurious has found in Florida, as she shows in this post on Oleander Moths (Syntomeida epilais) and a companion piece on its Oleander host plant.  This striking day-active moth, also called Uncle Sam Moth (for its red, white, and blue colors) and Polka-Dot Wasp Moth (for obvious reasons), may seem like an easy-to-spot target for would be predators, but its gaudiness is actually warning of the toxic chemicals it has sequestered in its body from the Oleander on which it fed as a larva.  Oleander contains the toxins oleandrin, a cardiac glycoside, and neandrin and is toxic if ingested.  Although oleander is an Old World exotic, oleander moths may also be found feeding on devil’s potato vine (Echites umbellata), which may have been their native Florida host before the introduction of oleander to the United States.

Aside from the underwings (genus Catacola) and the recently incorporated tiger moths, Noctuids are typically thought of as the “basic brown moths” – relying on just the aforementioned groups to add a splash of color to the family’s otherwise drearyness.  Nothing could be further from the truth – check out the stunning Eight-spotted Forester (Alypia octomaculata) in this post by Matthew York at See Trail. Larvae of this beautiful little moth feed on ampelopsis, Virginia creeper, and other plants in the grape family (similar to the grape leaf skeletonizer above). “A great moth; brilliant color, diurnal…… and yes… Noctuid. Some moths, like people, don’t go with the trends.”

For the most part, tiger moths shun the daytime in preference for the safety of the night. That does not mean, however, that they are any less colorful, as Matthew York at See Trail shows in his post Poor Grammia. Notarctia proxima, the Mexican Tiger Moth, and its relatives have had a bit of name shuffling over the years at the hands of taxonomists – formerly placed in the genera Grammia and Apantesis. Whatever name you call it, the striking white and black striped forewings give a clue about their common name of tiger moths, and the red, black-tipped abdomen not only add to its beauty, but belies the defensive compounds it surely contains.

Speaking of tiger moths and defensive compounds, watch the video that Chris Grinter at The Skeptical Moth included in his post Moth Perfume. In it, Chetone angulosa gives a striking display of a common defensive mechanism for the group – excreting hemolymph (sweating blood, so to speak!). So spectacularly does the moth do this that you can actually hear the hissing sound of the fluid being pumped from the body. Moreover, there seem to be at least a couple of active ingredients in the froth – one that smells like peppermint, and another that causes numbing of the tongue (as Chris can testify firsthand – he is a truly dedicated experimental naturalist!).

In similar fashion to our North American species of underwing moths (Catocola spp.), the related Eudocima materna, one of the fruit-sucking moths of south India, uses its drab-colored forewings to hide its brilliantly colored hindwings, as Karthik at Karthik’s Journal shows us in his post Startling Displays.  This forms a double line of defense against would-be predators – the forewings blend marvelously into the color of the tree trunks upon which it rests during the day, camouflaging the insect and making it nearly invisible.  If this doesn’t work, a sudden flash of the hindwings may startle the predator just enough to allow the moth to take flight to another tree – where it instantly “disappears” as soon as it closes its wings.

Australia also has some very colorful fruit-piercing moths, and Bronwen Scott at Snails Eye View presents some beautiful photos of the particularly strikingly-colored Othreis iridescens. Like other members of the group, this Far North Queensland endemic feeds on fruit (Pycnarrhena novoguineensis and Hypserpa laurina, both Menispermaceae, in the case of this species), but as it is apparently the rarest of the primary fruitpiercing moth species in Australia it is not considered to be a pest (and Bronwen would cut it some slack even if it was!).

Adults are but only one of four life stages that all moths go through. If moths are the “forgotten” leps, then caterpillars are the “forgotten” moths. In many cases, the caterpillar stage cannot be recognized until it becomes a moth (and in some cases the caterpillars are completely unknown). Fortunately, Navy entomologist corycampora at Entophile recognized the caterpillar he found on his croton bush, which he features in the post Croton caterpillar, Achaea janata (Linnaeus), (Lepidoptera: Noctuidae). These “eating machines” can be just as fascinating to observe as their scaled adult counterparts, and while croton seems to be a preferred host in Hawaii, it apparently also feeds on castor beans (judging by its other common name, Castor Oil Semi-looper).

Often dismissed as noctuids, the prominent moths tend to be fuzzier, more thickly-bodied moths that rest with their wings curled around their abdomen or tented over their back (rather than flat like noctuids and most other moths). TMaM organizer Seabrooke Leckie at the Marvelous in Nature has a love affair with prominents, and in her post Georgian Prominent, she features the nicely thick-bodied and fuzzy Georgian Prominent, Hyperaeschra georgica. The caterpillars of this widespread species feed on oak (Quercus spp.), thus, unless you live in the Pacific Northwest you stand a good chance of encountering this species – if you’re you’re willing to make the effort.

Many of us are probably familiar with the evergreen bagworm moth (Thyridopteryx ephemeraeformis), whose large, cone-shaped bags almost look like fruit hanging from the evergreen bushes on which the caterpillars feed. But did you know there are other species of bagworms as well? Jason Hogle at xenogere does, and he compares and contrasts two of them in this duo of posts, Rainy day on the patio and The Other Bagworm. One huge and prominent, the other (Dahlica triquetrella) very small and oft unseen. One with all manner of plant matter stuck to its bag, the other usually mistaken for small bits of dirt or wood. Jason is so good, he can even determine the sex of the caterpillar inside the bag!

Carolyn at Roundtop Rumings is hoping that somebody can Name this moth, which she found on the door of her cabin in the forests of Pennsylvania. Don’t let her inability to name this moth fool you, however, for her post contains loads of information on exactly the kinds of characters one should take note of when trying to identify hawk moths. Large size and membership in a popularly studied group aren’t enough – what do the hindwings look like? Are there any spots on the abdomen? As a coleopterist, I hesitate to offer my relatively uninformed opinion on the exact genus and species for this moth, but I’m going to go out on a limb here and suggest maybe something in the genus Ceratomia, perhaps the waved sphinx (C. undulosa)?

I hope you have enjoyed this issue of The Moth and Me, and my sincere thanks go out to all of those who contributed!  The hosting slot for next month’s issue of TMaM is still open, but you can submit your contributions anyway to Seabrooke Leckie at the home site for inclusion in the June 2010 issue once a host is selected.  The submission deadline is June 13, with the issue appearing a few days later.  Perhaps you might like to host the June issue – hosting is not only fun, but also a great way to introduce readers to your site and generate a little traffic.  Contact Seabrooke at the home site if you’re interested – I’m sure she would love to hear from you.