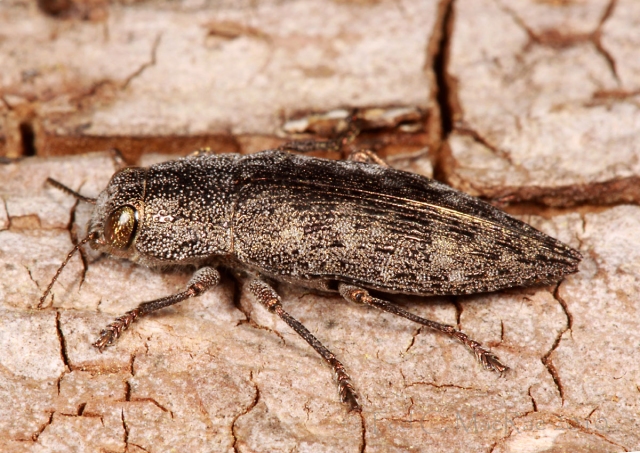 This is Dicerca lurida (family Buprestidae), another of several woodboring beetle species that I found on the trunk of a large, wind-thrown mockernut hikcory (Carya alba) tree during my early April hike of the lower Wappapello Section of the Ozark Trail.  Actually, I had already spent some amount of time at the tree photographing a checkered beetle (Enoclerus ichneumoneus) and a longhorned beetle (Stenosphenus notatus) giving a ride to a phoretic pseudoscorpion before I even noticed not one, but several of these cryptically colored jewel beetles on the trunk of the tree.

Like other species in the genus, the brilliant metallic gaudiness of Dicerca lurida as a pinned insect specimen in a cabinet belies its near invisibility when sitting on the bark of its host trees.  Several different trees have been reported as hosts (Nelson 1975), but hickories of the genus Carya seem to be the most preferred.  The beetles rapidly colonize wind-thrown or cut trees and branches while the wood is still hard and strong, and I have collected it from a number of hickories and reared it from dead pignut hickory (Cary glabra) and shellbark hickory (Carya laciniosa), as well as sandbar willow (Salix exigua).  Most jewel beetles are active as adults only during a limited time during the season – typically late spring and early summer in eastern North America, but species of Dicerca occur as adults throughout the year – even during winter hibernating under loose bark.  This individual probably represents one of those hibernating adults that resumed activity in the first warm days of spring, searching for freshly killed host trees on which to mate and lay their eggs.  Widespread across eastern North America, it is perhaps the commonest species of the genus and one of the commonest jewel beetles in North America.  Yet, despite its abundance, year-round occurrence, relatively large size, and attractive coloration, its cryptic habits keep it seldom seen by those who don’t look for it.