As I mentioned in my previous post, I really wasn’t satisfied with the photographs I took of the clown beetle, Eleodes suturalis, that I brought back from Oklahoma. I had placed the beetle in a terrarium of native soil and taken the obligatory whole beetle and head close-up photographs, both showing all the characters needed to identify the species in adequate detail. They were good, scientific photos, but they weren’t very exciting. In fact – they were boring! Now, I know not every subject I photograph is going to be a wower (the giant desert centipede I recently featured probably setting that standard), but it is important to me that the photographs I post here at least be interesting. After taking those first E. suturalis photographs, then being underwhelmed as I brought them up one-by-one on the computer, I started thinking about whether certain insects are just ‘homely’, and no matter how you photograph them they will still be homely. Eleodes suturalis is by no means a homely beetle in real life, but that is due mostly to the impressiveness of its size – a quality not easy to project in photographs.  Beyond that, its somber coloration, lack of unusual morphological modifications, and “beady little eyes” (fide Adrian) don’t offer much else in the way of help.  Combine that with the unflattering salmon coloration of its native soil as a substrate and an exoskeleton just shiny enough to cause annoying specular highlights, and you’ve got a recipe for really boring beetle photographs! 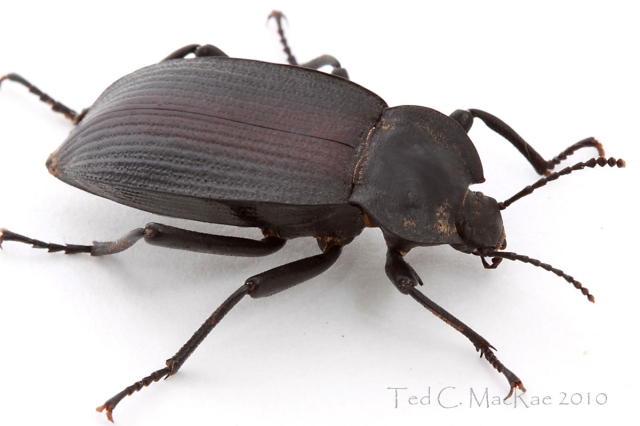 That’s when it occurred to me to try photographing the beetle in a white box.  I’ve only just begun to experiment with this technique and have been impressed with its ability to make somber-colored subjects (e.g., Gromphadorina portentosa) attractive and truly beautiful subjects (e.g. Buprestis rufipes) simply stunning.  The sharp, clean environment of a white box demands a clean beetle, so I gave the beetle (who had done much digging since the previous photo shoot) a good soaking and scrubbing (to the beetle’s great disapproval!).  Yes, I know there is still some dirt on him, but I think a dental pick and wire brush would have been needed to remove every last bit, caked on as it was!  Despite that, I think I achieved the desired effect – specular highlights… gone!  Boring background… gone!  Clean and crisp and ready to impress! The photos also do a much better job of highlighting the 3-dimensionality of the beetle than the original photographs.  Of the many photos I took, my favorite is featured above, and below I present two more that closely approximate the vantage of the two photos I posted from the first shoot in a side-by-side comparison. 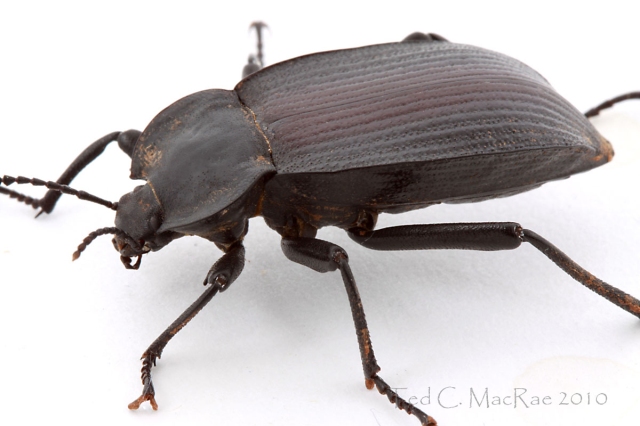 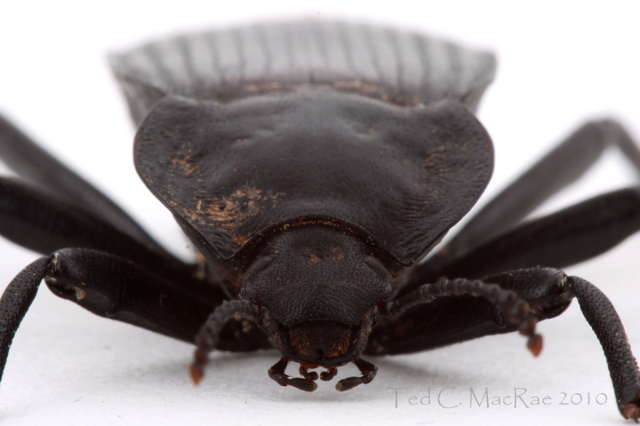 For those of you wondering how I managed to secure the beetle’s cooperation for these photos, I used a modification of the “lens cap” technique, covering the beetle with a large glass bowl instead.  The beetle crawled around under the bowl for a bit but eventually would end up settled down against the edge.  By carefully lifting the bowl I was able to avoid disturbing the beetle and fire a few shots before it would start wandering again.  I just repeated the process until I was satisfied I had a few good shots in the sequence.

Does this mean an end to my preference for in situ photographs?  Certainly not.  But some beetles just look better in white!

Ted C. MacRae is a research entomologist by vocation and beetle taxonomist by avocation. Areas of expertise in the latter include worldwide jewel beetles (Buprestidae) and North American longhorned beetles (Cerambycidae). More recent work has focused on North American tiger beetles (Cicindelidae) and their distribution, ecology, and conservation.
View all posts by Ted C. MacRae →
This entry was posted in Coleoptera, Tenebrionidae and tagged beetles, darkling beetles, photography, techniques. Bookmark the permalink.

8 Responses to …the “better” Eleodes suturalis