Shortly after entering La Reserva Ecológica Costanera Sur (Buenos Aires, Argentina) during my early March visit, I noticed a fairly large patch of solanaceous-looking shrubs.  Even from a distance, I could see patterns of white stippling on the foliage immediately identifiable as signs of lace bugs, true bugs (order Hemiptera) in the family Tingidae.  As the only arborescent solanaceous plant recorded from the reserve, I was quickly able to identify the plant as Solanum granuloso-leprosum (Haene and Aparicio 2007), but I expected an identification of the bug to be much more difficult to come by.  Afterall, 84 species of tingids distributed in 25 genera have been recorded from Argentina (Montemayor and Cascarón 2005), and lace bug photos aren’t very frequently encountered in the variety of web sites that I visit when trying to get a lead on the identity of insects outside my area of expertise. 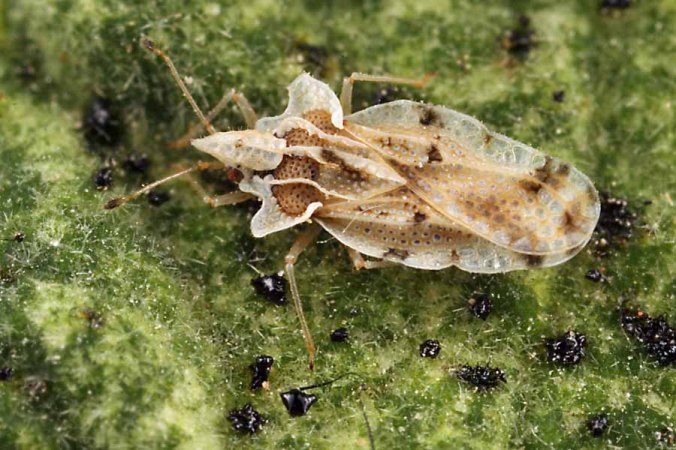 Still, I had a clue—the association of the species with Solanum. Lace bugs are predominantly specialist feeders, with many species showing fidelity to a particular plant genus or group of related genera. The genus Solanum contains a number of economically important species, thus, it was a good bet that this species has at some point been considered an economic pest. With this in mind, I opened my volume of Heteroptera of Economic Importance (Schaefer and Panizzi 2000) to the chapter on lace bugs (Neal and Schaefer 2000) and began looking through the species accounts for South American species recorded on Solanum or other species in the family Solanaceae. I only had to reach the second species account before finding Corythaica cyathicollis and the statement “This Neotropical species is a pest on many solanaceous crops…” The identification was confirmed when I found a rather complete description of the species’ systematics, biology, and economic importance (Kogan 1960), complete with line drawings of the adults and all immature stages. Comparison of my photos with these drawings leaves little doubt that this is, indeed, C. cyathicollis.  (Interestingly, Montemayor and Cascarón (2005) list 28 species of Solanum as recorded hosts for C. cyathicollis in their Argentina checklist; however, S. granuloso-leprosum is not among them…)

The bristles of needle-like setae exhibited by the nymphs may be useful for species identification by entomologists (and even phylogenetic analyses—see Guilbert 2005), but for the nymphs themselves it seems fairly obvious that they serve some adaptive function for protection. Neal and Schaefer (2000) note that nymphs of many species of Tingidae seem to be protected by a wide variety of other adaptive mechanisms as well, including maternal care, the production of alarm pheromones and possibly the secretion of noxious compounds. Indeed, most tingids occur in multiple aggregations with large numbers of nymphs of the same species on a single host plant relatively free of predation and parasitism—it is difficult to imagine that such aggregations could exist without employing a strong arsenal of multiple defense mechanisms.

Occasional adults were seen within the aggregations that showed decidedly lighter coloration than the majority of adults seen. The aggregations were comprised primarily of adults and late-instar nymphs, so I presume these light-colored adults represented newly molted, teneral individuals that will eventually assume normal coloration once their new adult exoskeleton fully hardens. 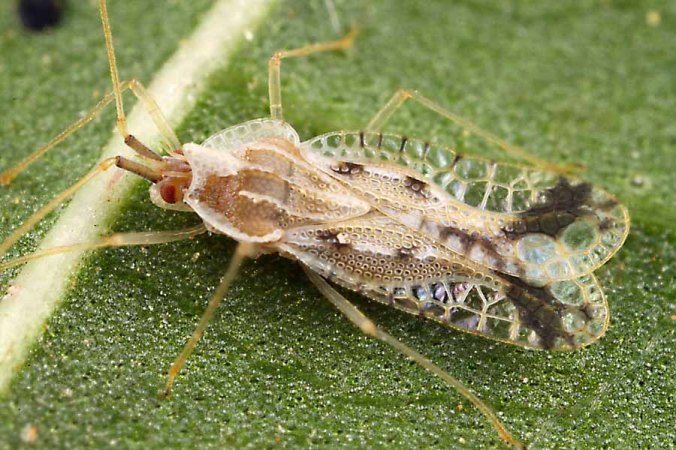 Later in the day, I encountered a different lace bug species on a different shrub—Ricinus communis.  This is the famous castor oil plant, a member of the Euphorbiaceae, native to the Old World and now widely distributed throughout tropical regions.  Despite castor oil’s reputed ability to heal wounds and cure ailments, the beans and other plant parts also contain ricin—a toxin with known insecticidal properties.  Apparently these lace bugs possess some mechanism that makes them immune from its effects.

This species was also fairly easy to identify—one of the species listed in Neal and Schaefer (2000) as feeding on Ricinus is Gargaphia lunulata, which they note feeds on several useful South American plants belonging to a number of families, including the Euphorbiaceae.  Photographs and drawings of this species can be found in Ajmat et al. (2003) and agree well with the adults and nymphs I found on this plant.  Unlike C. cyathicollis, which were found on the adaxial (upper) surface of the leaves, I found G. lunulata exclusively on the abaxial (lower) surfaces.  Nevertheless, the characteristic white stippling was easily visible on the leaves and gave immediate clue to their presence.