For almost a month I waited—waited for that spaceship-sounding drone from the trees; waited for their bodies to drip from the vegetation and their skins to litter the yard; waited for their delightful shrieks every time I jostle a tree branch. I had seen them mass emerging from the ground in southern Missouri in late April, but just 100 miles north in my hometown it seemed they would never show. Cold, rainy springs must not be to their liking, as it was not until the sun finally broke through and temperatures climbed into the 80s that they finally made their appearance in St. Louis—nearly a month after that mass emergence event further south had me looking and listening daily for one of North America’s most spectacular natural history events, Brood XIX of the periodical cicada!

Finally, on May 21 I saw the first adults of the year at Shaw Nature Reserve not too far from my house (not intending to claim this as the date of their first appearance in my area!). They were not yet singing, but the adults were everywhere, many sitting right next to the skins they had just emerged from the previous evening. I had to travel on business through the southeastern U.S. that following week, and it was while visiting the beautiful MSU campus in Starkville, MS that I got my first taste of their late-afternoon synchronized, pulsating song. Upon my return to St. Louis at the end of the week, the eery drone filled the air as soon as I stepped out of the airport. It had been 13 years since I’d heard that sound, but euphoric recall instantly transported me back to 1998 and 1985 and my experiences with these marvels of evolution. 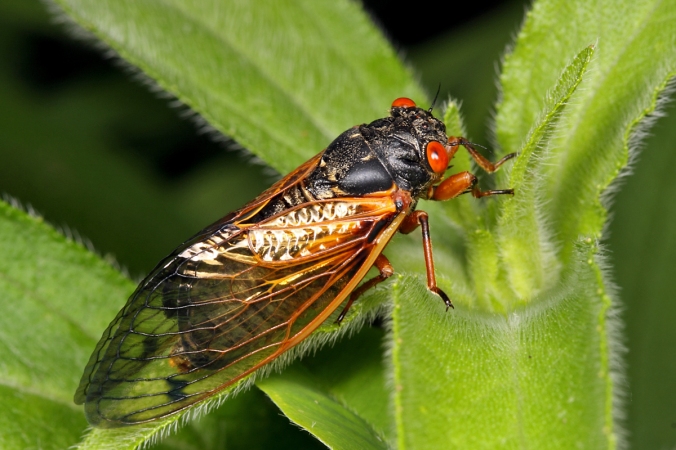 I don’t know that there is anything I can say about the periodical cicada that hasn’t already been said—repeatedly—by the numerous, more erudite sources that are following this event as if it were the approach of Haley’s comet. I don’t even know for sure which species are in my area and how to tell them apart. All I do know is that the constant droning of their singing is both maddening and amazing—a spectacle to behold for what it is, knowing that it will be the year 2024 before I have my next chance to witness it.

As I write this, I’m sitting in my hotel room in Salem, AR, where the cicadas are even more abundant than around my home in the woods—several stops to check building lights for beetles have ended in frustration because the cicadas were so numerous that they virtually swamped the space on the walls under the lights. There do seem to be two species here—a smaller one with a completely dark underside and the raspy, screeching sound that I am familiar with, and a larger one with the abdominal segments light along the posterior margins and a softer trill that almost reminds me of the song of an American toad. Maybe there are other species mixed in that I have not discerned, but I’ll not concern myself with that. Instead, I will continue to marvel at the extraordinary event unfolding before me, watch it as it cycles out, and chuckle at the complaints of the masses bemoaning their temporary inconveniences.