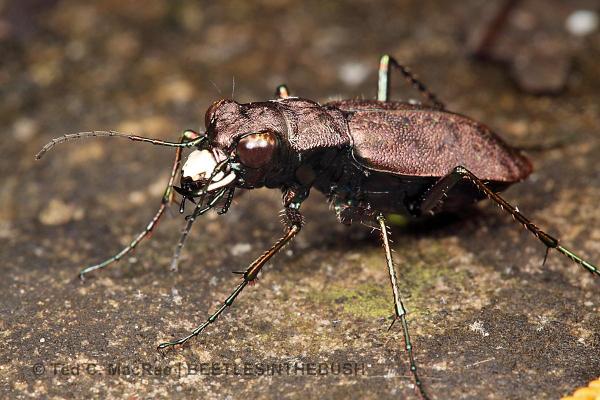 Long before I began studying tiger beetles in earnest, I became aware of one of Missouri’s more interesting species—Cylindera unipunctata (one-spotted tiger beetle).  One of my favorite woodboring beetle collecting spots back in the 1980s was Pinewoods Lake Recreation Area near Ellsinore in the southeastern Ozarks.  I had stumbled upon this spot in the beginning my beetle studies and spent countless days wandering the trails through the open forest that surrounded the relatively new lake and blacklighting in the campground at night.  I literally cut my entomological teeth at this spot.  While woodboring beetles were my quarry, I couldn’t resist the few brown, apparently flightless tiger beetles (in reality, they can fly but rarely do so) that I had seen clambering across the woodland trail in front of me during one of my first visits to the area.  That following winter, when I showed them to Ron Huber during a mutual visit at the home of long-time lepidopterist Richard Heitzman (and as far as I know, owner of the largest private insect collection in Missouri), I was pleased to see his palpable excitement at my find.  I kept an eye out for this species ever since, and while I have found them in a number of localities here in Missouri—all along the eastern edge of the Ozark Highlands south of St. Louis, I’ve never seen more than one or two, or maybe three at a time.  Even when returning to spots where I had seen them previously and looking for them specifically, they seemed a rare, elusive species.  By the time Chris Brown and I had begun our serious studies of the Missouri tiger beetle fauna, I had accumulated no more than a dozen or so specimens from places like Pinewoods Lake, Hawn State Park, and Trail of Tears State Park.  Their seeming preference for shaded, woodland habitats is unusual amongst North American tiger beetles, save for the conspicuous and commonly encountered Cicindela sexguttata (six-spotted tiger beetle), but within that habitat I had begun to notice a commonality—open woodland with steep rocky/clay slopes. 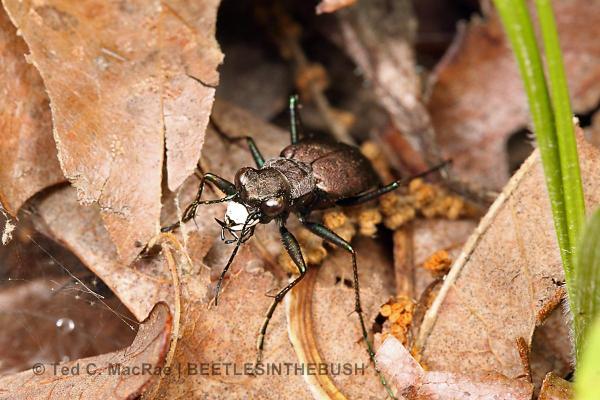 Beetles are quick to take cover in the leaf litter

A few years ago, Chris Brown noticed that this species seemed to be fairly common at Shaw Nature Reserve in Gray Summit, Missouri.  I was surprised to learn of the occurrence of this species just 40 miles southwest of St. Louis (and only 15 miles from my home), and in 2009 I resolved to go there and see it for myself.  I had just begun digital insect photography at the time as well, so I was looking forward to the chance to photograph one of Missouri’s rarer tiger beetles.  On the first trip to SNR in May 2009, I searched the trails repeatedly where Chris had seen them but never saw a single one.  I thought maybe I was too early, so I went back a couple of weeks later at the end of May, and this time I found one… but just one!  I got off a series of shots before the beetle bolted and eventually disappeared, leaving me with one decent shot of the species.  The lighting and focus in the photo were good, but the photo was just… well… boring! 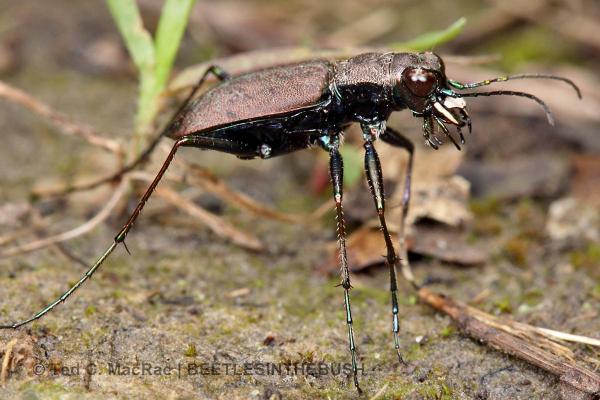 Adults were most frequent along sloping portions of the trail.

A few weeks ago, again near the end of May, I decided to try for the species again.  I’ve now been photographing tiger beetles for two years rather than two weeks, so perhaps I’ve learned a few tricks in locating and photographing the beetles that would give me a better variety of photos to show for my effort.  I went back to the same trail (Jane’s Wildflower Trail), and while I did have better luck (finding four beetles instead of just one) I was still not happy with the photos I had gotten to that point (only Photo #2 is from that session).  I decided to try my luck along another trail (Bluff Overlook Trail) where James Trager had seen an individual earlier just that week.  At first, the beetles seemed to have the same fairly low occurrence that they had along the first trail.  Still, I saw enough individuals to get a number of photos that I was happier with (#1, #3 and #4 in this series), and I figured the job was done.  We hiked down towards the river to see if we might find the population of Cicindela formosa generosa that Chris had seen on a sand bar in a previous year, but flooding by the Meramec River had much of the area—and certainly any open sandy areas—under water. 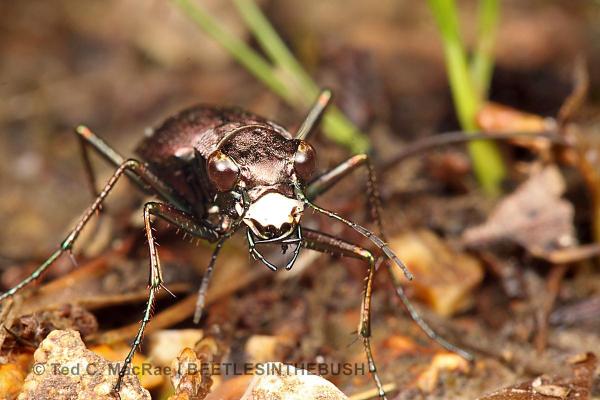 Beetles were less skittish when hidden amongst small plants.

By the time we took the trail back up to the higher elevations it was getting later in the afternoon, and I returned to keeping an eye out for the tiger beetles.  As soon as we returned to the steep, rocky clay slope areas where I had seen the few earlier beetles, I started seeing them in decent numbers.  I had enough photos by then, so I collected a few more individuals to beef up the voucher series, and as we walked it seemed the beetles became more numerous with each step.  Then I saw something I had not seen all day—a mating pair!  I carefully setup for the shot, but I disturbed them in the process and they split up.  However, dejection quickly turned to elation, as almost immediately I saw another mating pair.  This time I made no mistakes and got in a few shots before they broke up and split.  As I was photographing them, I saw another mating pair perched on a nearby rock—I liked them even better, and the shot below is my favorite of that pair.  Over the next half hour, we saw countless adults and mating pairs.  Part of me wonders if it was the time of day, as the species is reported to be more active during late afternoon (Pearson et al. 2006).  I do note that all of my visits to Jane’s Wildflower Trail have been during morning and early afternoon, so perhaps they are just as common along that trail as well and I have just never been there at the right time of day to see that. 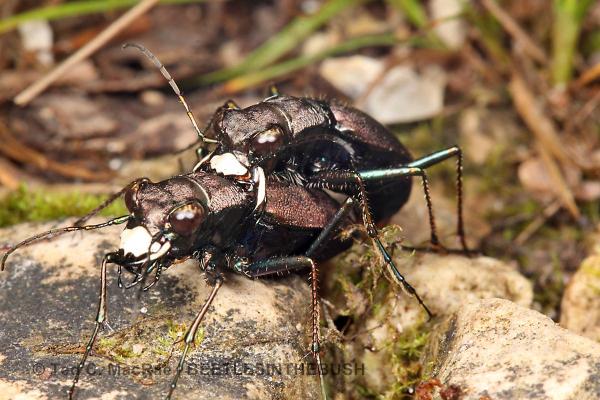 Mating pairs were seen with greater frequency during late afternoon.

While most of the adults I saw were on the Bluff Overlook Trail, one thing I did find in numbers along Jane’s Wildflower Trail were larval burrows.  Their location was consistent with the habitat noted by Hamilton (1925), who described the larvae from specimens dug from bare, rocky soil on a steep, sparsely wooded hillside.  I returned the next morning to the spot where I had seen the larval burrows and was able to extract four larvae from their burrows by digging them out and have set them up in a rearing container of native soil.  I can’t yet rule out the possibility that they might represent C. sexguttata, which occurs commonly in the area; however, all signs—the depth of the burrows (only 3 to 4 inches), their occurrence on steep, rocky slopes, the open woodland—point to them belonging to C. unipunctata. 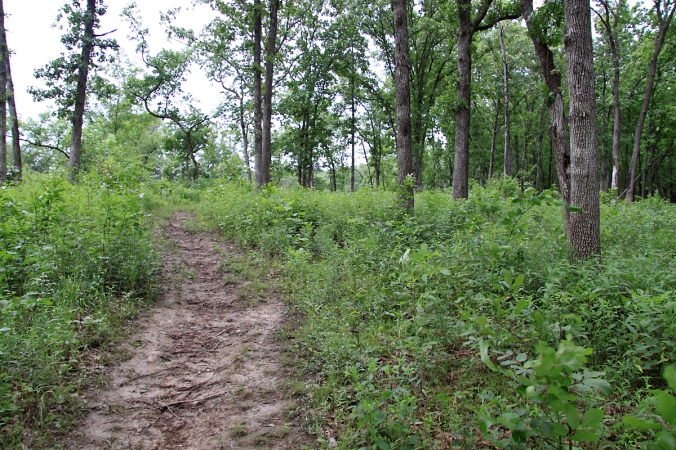 Cylindera unipunctata may truly be more common across its range (eastern North American forests) than is realized.  In contrast to C. sexguttata, and despite their shared woodland habitat, C. unipunctata is somber colored, avoids sunlit spots, rarely flies, and shows a distinct preference for staying within the leaf litter.  These features make the beetles easily overlooked, even by experienced tiger beetle collectors.  Frank Guarnieri (2009) recently published a note describing a “hot spot” for this species in Maryland, in which he described an encounter with innumerable individuals in a Maryland state park from late May through June.  This encounter was all the more remarkable considering that he had only seen two individuals during the previous ten years.  I tend to agree with his assertion the scarcity of C. unipunctata is probably more apparent than real—an artifact of its cryptic habits, short temporal occurrence, and fairly specific habitat preferences that are atypical amongst most tiger beetle species.

Hamilton, C. C.  1925.  Studies on the morphology, taxonomy, and ecology of the larvae of Holarctic tiger beetles (family Cicindelidae).  Proceedings of the U. S. National Museum 65(17):1–87.