Some of the first residents of my new insect cabinets (see MacRae Entomology Museum Expansion) are also among the newest specimens in my collection. Not long ago I received a box from world tiger beetle expert David Brzoska, who had carefully chosen male/female pairs of a number of tiger beetle species from his impressive world collection and sent them to me as a surprise gift. Now, us North America-bound collectors are limited to just a few genera, e.g. Cicindela (although increasingly recognized as a cluster of several closely related genera), Tetracha, and if we’re really lucky Amblycheila and Omus (the last being one I still have not seen in the field). In the rest of the world (especially the tropics and subtropics), however, generic diversity is much higher, and coming as they did from South America, Africa, Australia, and southeast Asia most of the specimens in the sending represented new genera for my collection. While I was grateful for them all, the specimens that had me leaping for joy was this fine pair of Manticora scabra, one of the so-called “African Giant Tiger Beetles.” 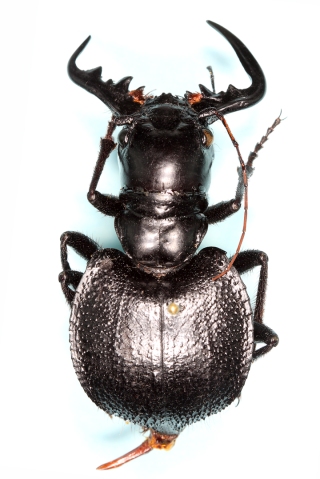 Males of all Manticora spp. have asymmetrically enlarged mandibles

In the case of these beetles, the term “giant” is no exaggeration. The male specimen (above and left) measures a full 54 mm (that’s more than 2 inches, folks!) from the tip of its grossly enlarged mandible to the tip of its abdomen, and even the female at 47 mm length is substantially larger than my 38-mm long male specimen of North America’s largest tiger beetle, Amblycheila cylindriformis. While enlarged male mandibles are a common feature among many beetle groups, Manticora males feature an unusual asymmetry in the mandibles, with the right mandible always much larger than the left (itself enlarged compared to the female mandibles, and even the latter cannot be considered small).  Apparently the asymmetry represents a trade-off in natural selection—males use their mandibles not only to hunt prey but also hold onto the female pronotum during mating and subsequent mate guarding. There is positive selection pressure for larger mandible size, as males with smaller mandibles are more likely to be dislodged from the female by competing males. However, because of the large size of the species, larger male mandibles are less effective for securing normal prey items that tend to be smaller in size. If both mandibles were enlarged to the point needed to securely grip the female pronotum, the male would be unable to feed adequately, but having only one mandible fully enlarged provides sufficient grip while maintaining an ability by the somewhat smaller left mandible to grip regular prey items. A consequence of the mandibular asymmetry is that males ride “to the left” when coupled with females. 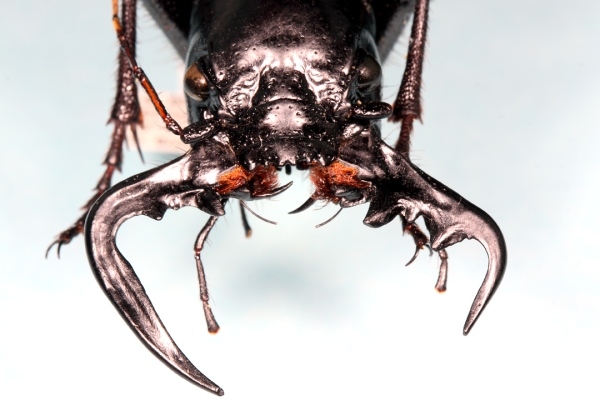 The right mandible is larger than the left mandible.

David identified these individuals as the species M. scabra, occurring throughout much of southern Africa (Botswana, Malawi, Mozambique, Republic of South Africa, Tanzania, Zimbabwe—according to Carabidae of the World). I presume the species epithet refers to the roughened surface of the elytra. There are at least two recent treatments of the genus (Werner 2000, Mares 2003); however, I have access to neither because of the exorbitant cost of these books—$247 and $433, respectively (I find it rather ironic that the recent explosion of book-sized treatments of “large” beetles has resulted in publications priced so high that they are inaccessible to most professional entomologists).

Female mandibles are nonetheless impressive despite their smaller size.

I made a trip to South Africa in 1999 and had hoped to see these beetles for myself, but unfortunately this did not happen. Perhaps part of the problem was my impression of these beetles as nocturnal hunters—the prevailing ‘wisdom’ at the time. My field partners and I made several nighttime forays in the semi-arid bushveldt where we were camping, using flashlights to scan the ground for any large black beetles we could find moving about. We found numerous tyrant ground beetles (family Carabidae, genus Anthia) and a diversity of tok-tokkies (family Tenebrionidae), but no Manticora tiger beetles. Shortly after that trip, Oberprieler & Arndt (2000) published an informative summary of the biology of several Manticora populations in South Africa, their most notable finding being that adults are opportunistic diurnal predators that hunt by smell rather than nocturnal visual hunters. Perhaps someday I’ll have another opportunity to visit South Africa and see Manticora adults in the field, but until that time I’m happy to have these two specimens residing in my cabinet.

My sincerest thanks to David Brzoska for these sending me these fine specimens and for the many additional kindnesses he has extended to me during the past few years.

Oberprieler, R. G. & E. Arndt. 2000. On the biology of Manticora Fabricius (Coleoptera: Carabidae: Cicindelinae), with a description of the larva and taxonomic notes. Tijdschrift voor Entomologie 143:71–89.