The beetle in these photos was another “gift” from my colleagues in Fontezuela, Argentina—brought to me shortly after I found the first gift on my desk during my first week at the station. This is obviously a firefly, but I also recognized it as the same species as (or very close to) one I had photographed in a soybean field during last year’s March visit. I only got off one shot of the one in the soybean field before it took flight, so here are some better views of the species—enhanced by the cleanliness inside the pearly white confines of a styrofoam cooler.

My attempts to identify the species last year were fruitless (though admittedly cursory). This year I tried a different tact—I went to the website Lampyridae de Argentina (which is really just a list of species based on Blackwelder’s Neotropical beetles checklist) and did a Google image search on each genus in the list (combined with the term “Lampyridae”) until I encountered something that looked pretty close in the genus Aspisoma (tribe Photinini) in the Lampyridae photo gallery at PyBio.org (Paraguay Biodiversidad). The page contains excellent dorsal habitat photographs of a number of species in the genus; however, unfortunately the majority of them are labeled simply as Aspisoma sp. (it should not be surprising that the state of lampyrid taxonomy in South America is still far from complete). The individual shown here is a dead ringer for Aspisoma sp. #8, but spp. #51, 52, and 53 cannot be discounted. I sent the photos to cantharoid beetle expert Santiago Zaragosa Caballero, who confirmed the species appeared to be a member of the genus Aspisoma but admitted to not knowing the South American fauna well enough to offer a species ID. Nevertheless, a genus ID is better than nothing, and my thanks to Santiago for his confirmatory ID. 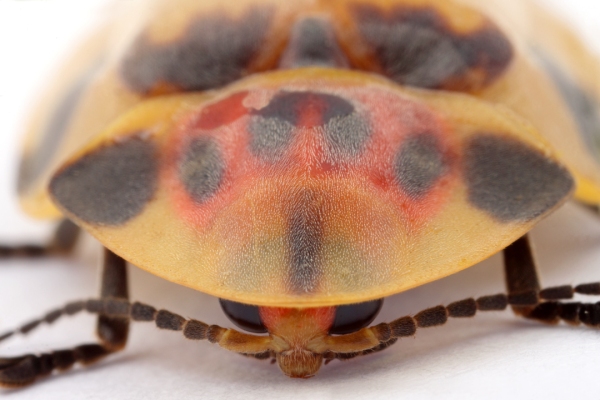 It’s no secret that I love face shots! The above photo, however, was the best I could do for this species due to its highly explanate (flanged) pronotal hood and the typical firefly habit of hunkering down and using their flange to protect their softer underparts when feeling threatened. I call this the “backwards” firefly because everything about it seems opposite to my concept of fireflies in eastern North America—yellow with black markings instead of black with yellow markings and active during the day instead of at night, which I most easily ascribe to its occurrence opposite to the Northern Hemisphere! (wink)

12 thoughts on “The backwards firefly”