One of my favorite beetle species in Missouri is Dicerca pugionata—a strikingly beautiful jewel beetle (family Buprestidae) found sporadically across the eastern U.S. Unlike most species in the genus, which breed in dead wood of various species of trees, D. pugionata larvae mine living stems of certain woody shrubs—namely alder (Alnus spp.), witch-hazel (Hamamelis virginiana) and ninebark (Physocarpus opulifolius) (Nelson 1975). When I first began studying Missouri Buprestidae (way back in 1982), the species had just been reported from the state based on a single specimen (Nelson et al. 1982). I happened to stumble upon these beetles at what became my favorite collecting spot during the 1980s—Victoria Glades Natural Area, just south of St. Louis in Jefferson Co. For several years while I was visiting Victoria Glades, I found these beetles regularly during spring and fall on stems and branches of living ninebark plants growing within the ravines and along the toeslopes at the lower edges of the glades.

After finding the beetles at Victoria Glades (and nearby Valley View Glades Natural Area), I made it a habit to examine ninebark wherever I found it growing in Missouri. Ninebark is actually rather common in the state along the rocky streams and rivers that dissect the Ozark Highlands. Interestingly, I almost never encountered this beetle on ninebark elsewhere in the state. I’m sure it occurs in other areas, but probably at too low a level to be easily detected. I surmised that the populations at Victoria and Valley View Glades were unusually high due to the non-optimal conditions for its host plant. The ravines and toeslopes where the plants grow are drier than typical for ninebark, and unlike the lush, robust plants found in moister streamside habitats, the plants at these glades are small, scraggly and often exhibit a certain amount of dieback. It seemed likely to me that the plants growing in the glades were less capable of fending off attacks by these insects, thus resulting in relatively higher numbers of beetles at these glades. 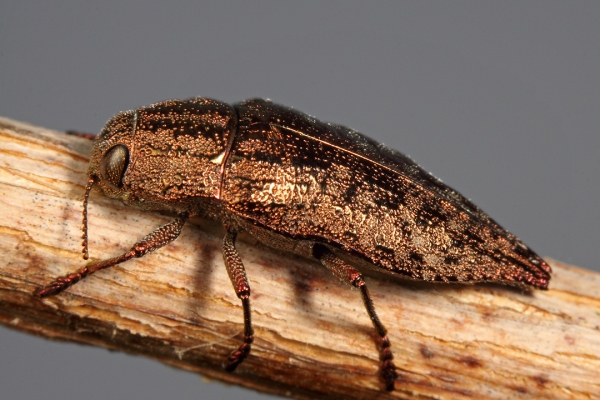 After the publication of my “Buprestidae of Missouri” (MacRae 1991), it would be many years before I actually returned to Victoria Glades. When I did return, I was pleased to see that management practices (e.g. prescribed burning, cedar removal, etc.) intended to halt the encroachment of woody vegetation and preserve the glade’s pre-settlement character had been implemented in the area. I was a little bothered, however, by the seeming paucity of insects compared to the years prior to management. I visited the glades again several times afterwards, and not only did insect populations in general seem to be depressed, but I never succeeded in finding D. pugionata adults on the ninebark plants. I began to worry that the prescribed burns, while clearly beneficial to the glade flora, might have had a negative impact on the glade’s insect populations. 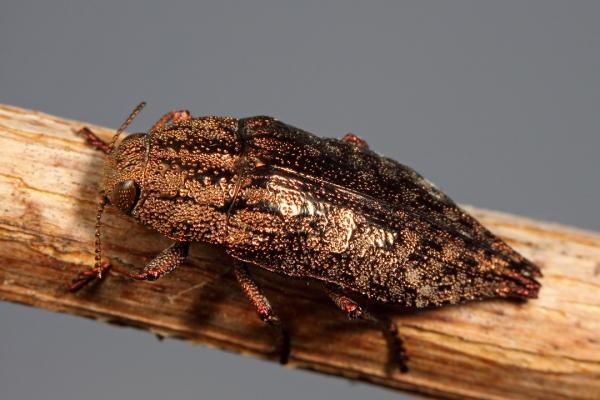 I’m happy to report that, at last, I have found the beetles again. I returned to the glades in early May this year and, for the first time since 1987 I found the adults of this species—five in all (a typical number for the many dozens of plants checked) and right in the same areas where I had so consistently found them 25–30 years earlier. This does much to allay my concerns about the ability of these beetles to persist in the face of prescribed burning (though I remain convinced that this management technique should be used more judiciously in our state’s natural areas than it has in recent years), and I’m happy to have these new photographs of the species, which are a decided improvement over the old scanned slides taken nearly 30 years ago! 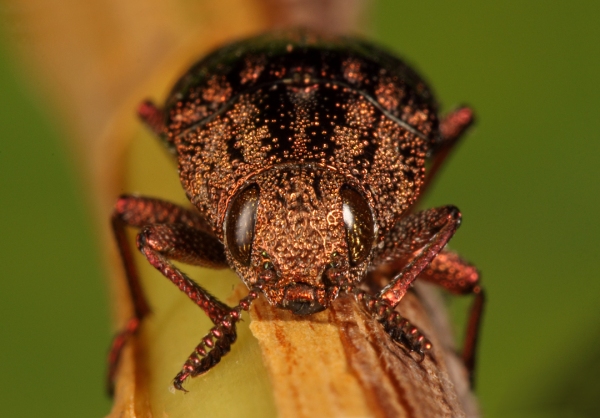