The argid sawfly Sericoceros krugii wasn’t the only insect I saw associated with seagrape (Coccoloba uvifera) during my May trip to Puerto Rico. While exploring the magnificent coastal sand dune system near Isabela (northwestern Puerto Rico), I encountered a tree with literally dozens of frosty, white “homopterans” on the reddish lower surface of its newly expanded leaves (the photo below shows them at only about half the density that I saw initially, as many became disturbed and left when I tried to photograph them). Clearly they were planthoppers in the superfamily Fulgoroidea, with their general shape wings held tent-like suggesting either the family Acanaloniidae or its close relatives in the family Flatidae. 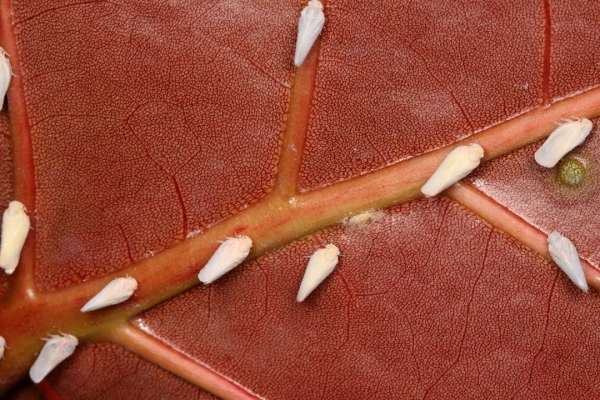 A better look at the adults in the photos revealed the presence of numerous parallel cross-veins along the costal margin of the forewings, placing them squarely within the family Flatidae (species of Acanaloniidae have reticulate forewing venation without the parallel cross-veins). Wolcott (1948) lists a dozen or so species of flatids from Puerto Rico, roughly half of which belong to the subfamily Flatinae (wings held tent-like) and the other half belonging to the Flatoidinae (more flattened insects with wings held almost horizontal). The likeliest candidate seemed to be Ormenis marginata, which Wolcott describes as occurring in the “millions, vast clouds of them flying up from seagrape plants that one may disturb around Isabela…” I can’t say I saw “millions” of them, but certainly they were abundant on this one plant. My identification was kindly confirmed by Neotropical fulgoroid Lois O’Brien, who also noted that this species now goes under the name Petrusa epilepsis Kirkaldy. 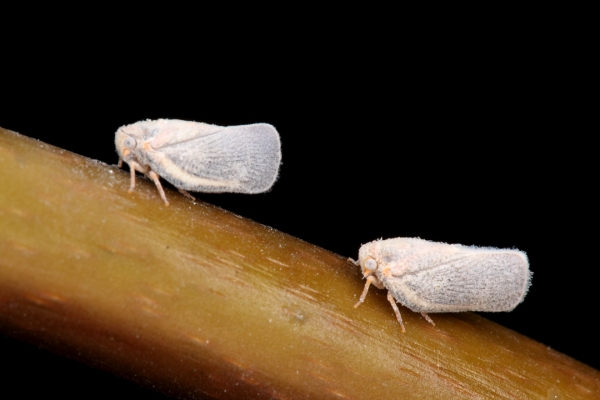 This seems to be a species that could cause considerable problems should it ever find it’s way to the mainland U.S. Many flatids are famously infidel when it comes to host plants—Metcalfa pruinosa (citrus flatid planthopper) being perhaps the best known example. Petrusa epilepsis not only feeds on seagrape but has also become a pest of coffee (Coffea arabica), coco-plum (Chrysobalanus icaco), jasmin (Jasminum spp. ) and black mangrove (Avicennia germinans), with damage resulting not only from direct feeding but also the development of sooty mold that colonize the honeydew excreted by the bugs that covers the foliage of the plants they infest (Nieves-Rivera et al. 2002).

A particularly amusing passage by Wolcott was his observation that adults “with care may be chased around a stem by gentle pursuit with a lead pencil.” I can add that a finger works equally well, as I used precisely this technique to get the adults in these last two photos positioned precisely where I wanted them for the photographs. Let’s hope they are as easily kept within their current West Indies distribution and are not eventually unleashed as yet another exotic pest for agricultural producers in tropical and subtropical mainland America to deal with.