A non-black background is better… often!

In my previous post, A black background is better… sometimes, I came to the defense of the oft-maligned pitch black background. Some macrophotographers studiously avoid black backgrounds (BBs), claiming that they look ‘unnatural’. However, as I discussed in my previous post, there are situations—primarily with light-colored or translucent subjects or those that are seen only at night—where BB can be aesthetically pleasing or more consistent with the subject’s natural history (or both, as in the case of the subject of my last post). On  the other hand I do agree that BBs are overused, showing up in many photos where a non-black background would have been a better choice. The reason for this is simple—BBs are easy! All one must do is ensure that the area behind the subject is clear of light-reflecting objects. While this is certainly preferable over cluttered backgrounds with random leaves, branches, grass stems, etc. that distract from the subject, a BB may nevertheless not be the most aesthetically pleasing  choice for the photo (I am guilty of this myself). Non-black backgrounds, on the other hand, require more forethought, not only about what color to use and how to achieve it, but also regarding camera and flash settings which can be a bit trickier due to the fact that both background and subject must be properly exposed.

Choice of background to a large degree reflects the style of the photographer. Some may choose a particular color based purely on aesthetics, but as an in situ macrophotographer I prefer backgrounds that are consistent with the natural history of the subject—diffuse green for subjects typically seen on foliage, gray or brown for those typically found crawling on trunks and branches, and sky blue for those found out in the open (e.g., perched atop flowers). Each of these backgrounds requires different technique, and this large orb weaver, Argiope argentata (silvery argiope), which I encountered in a corn field near Villa Cañas (Santa Fe Province, Argentina) back in April, is an example of the latter. In contrast to the strictly nocturnal orb weaver (Eriophora ravilla) in my previous post, this species and its congeners are commonly seen suspended on their webs in broad daylight. BB worked well with E. ravilla, but it would not be a good choice for A. argentata due to the large amount of dark coloring on the subject. More importantly, it contradicts this spider’s diurnal nature. I could have used natural light, but the sun was shining on the other side of the spider. However, this actually made it easier to achieve the blue sky background while illuminating the subject with flash. The large size of the spider (the body alone measured ~35 mm in length) put a lot of distance between the subject and the lens, which allowed the use of a larger aperture (f/10) with still acceptable depth-of-field. With a bright sky and the sun nearly behind the spider, I was able to keep a low sensitivity setting (ISO 100) to prevent graininess and a fast shutter speed (1/250 sec) to prevent motion blur. The slightly larger aperture was all that was needed to achieve a natural blue sky color in the background. More difficult was actually clearing the background between the spider and the sky, as the web was slung low amongst the tall corn plants. The series of photos below (click to enlarge) shows the results of my earlier attempts to photograph the spider; at first not thinking about the distracting corn plants, and then trying to avoid them by angling myself lower relative to the spider, which ultimately resulted in a bad angle on the spider: 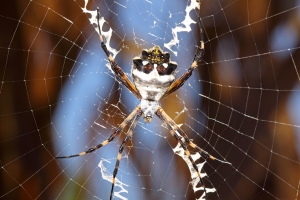 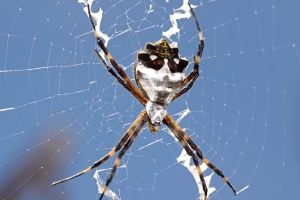 I finally decided to just break over the offending corn plants (above the ears!) to clear the background and give me the angle that I preferred. After that I was able to snap away to my heart’s content. Here is a closer view of the spider: 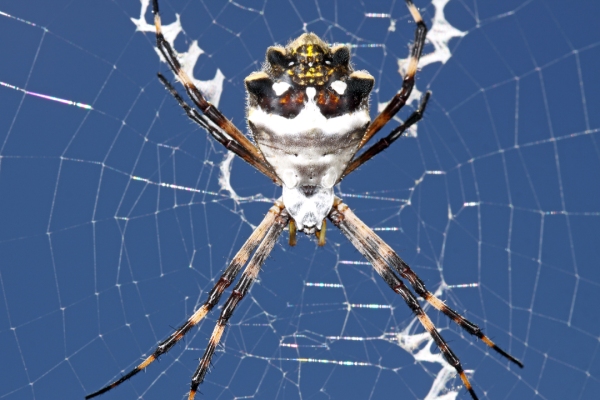 Lastly, I show the following series of photos to demonstrate the dramatic effect that aperture can have on a blue sky background. If you have a bright sky and don’t need a lot of DOF (e.g., you have a large subject-to-lens distance or a small subject lying within a narrow plane), adjusting the aperture up or down is a great way to achieve the precise color of blue desired. Larger apertures (lower f values) will result in a paler blue color, while smaller apertures (higher f values) create a deeper blue. In the photos below (click to enlarge), flash and camera settings are the same as those mentioned above except aperture: f/10 (left), f/13 (center) and f/16 (right).

2 Responses to A non-black background is better… often!