In September 2010, Chris Brown and I explored shortgrass/sage brushland habitat atop the Laramie Mountains in southeastern Wyoming’s Medicine Bow National Forest (location “J” on this map). We were entering the final days of our 7th Annual Fall Tiger Beetle Trip™ and, to that point, had found every tiger beetle species we had set out to look for. This day, however, was the official “skunk” day of the trip, for although we did see one Cicindela limbalis (Common Claybank Tiger Beetle)—collected live to become the subject of one of the crappiest tiger beetle photos I’ve ever taken—we did not see the tiger beetle that we were there to see; Cicindela longilabris (Boreal Long-lipped Tiger Beetle). Of course, I rarely have trouble finding consolation on a skunk day, and during fall this is even easier—the deep blue sky, crisp fall air, and vivid colors of a morphing landscape are enough to make even a bad day of insect collecting better than a good day of just about anything else. And then there are the band-winged grasshoppers (family Acrididae, subfamily Oedipodinae)!  When there are no tiger beetles to be had, there are almost always members of this group around, and other than tiger beetles I don’t think there is another group of insects that I enjoy photographing more. 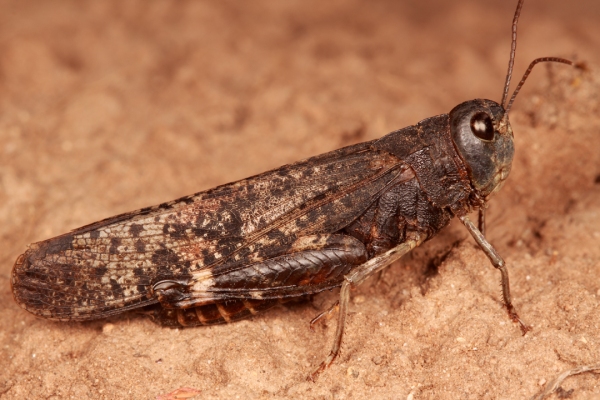 As we walked the trails not finding tiger beetles, I noticed these very dark grasshoppers every once in a while. They flew with a particularly noisy crackling sound that exposed bright red hind wings before dropping to the ground and instantaneously becoming almost completely invisible. Once I accepted that tiger beetle photography just wasn’t gonna happen that day, I began paying attention to these grasshoppers and, after working a few individuals, finally found one who was willing to let me get close enough for some photos. I’m not terribly fond of this first photo—the perspective is still too high as I had not yet learned by that time to get down flat on my belly for photographing anything on the ground (remember, this was two years ago). Nevertheless, it is the only one that I have that shows the entire body of the grasshopper. Since this location isn’t too far west of the Nebraska border, I figured an identification should be possible using the Nebraska grasshopper guide (Brust et al. 2008)—based on that work and subsequent examination of photos at BugGuide, I surmise this individual represents Arphia pseudonietana (red-winged grasshopper). There are other species of Arphia in Nebraska, some of which are easily confused with A. pseudonietana; however, most of these are more common further east. The only other species in the genus that occurs west into Wyoming is A. conspersa (speckle-winged grasshopper), and although it is similar in appearance and may have red hind wings (though more commonly orange to yellowish), adults are most common during spring and early summer. Arphia pseudonietana adults, on the other hand, are most active during mid-summer through fall.

The pronotum bears a single notch just in front of the middle.

Grasshoppers, particularly in the western states, tend to be loathed by ranchers who see them as competitors with cattle for meager forage resources, especially in dry years. This species does feed preferentially on a variety of grasses such as western wheatgrass (Pascopyrum smithii), buffalograss (Buchloe dactyloides) and blue grama (Bouteloua gracilis); however, it doesn’t seem to occur at economically important levels except in association with other, more numerous grasshopper species. I’m glad to know this, because for some reason I just don’t want anybody regarding band-winged grasshoppers of any kind as a pest. Other grasshoppers, fine—just not my beloved bandwings!

I presume this 5th instar nymph also represents A. pseudonietana

Later in the day I came across this presumed 5th-instar grasshopper nymph, and although it was quite skittish I eventually managed to get this single photograph before it resumed its frenetic hopping and I gave up in frustration. This is one of the better “one-shots” that I’ve managed to take—my only criticism being that the focus was just a tad too deep to catch the front metafemoral face. I really didn’t have much time to setup for this shot—once I got the critter reasonably in-frame I fired! Anyway, I’m inclined to think this also represents A. pseudonietana, although I’m less confident in that ID than I am for the adult as I wasn’t able to find a real good comparative photograph. Nymphs of A. pseudonietana are apparently most common from mid-spring to mid summer, so the seasonality is a bit off. I would be grateful to any acridophile who stumbles across this post and can provide an ID confirmation or correction (for either the nymph or the adult). Until then, I leave you with a shot that shows why I love fall regardless of whether I’m finding insects!

8 thoughts on “Another autumn oedipodine”