The ultimate jaws on a longhorned beetle!

Some 23 years ago, I departed on my first ex-U.S. insect collecting trip. I was still a youngster—barely into my 30s—but had by then a well developed interest in woodboring beetles of the families Buprestidae and Cerambycidae. I had spent the previous eight years since graduate school collecting these beetles throughout Missouri, work that led to the publication of my faunal treatments of the two families for the state (MacRae 1991, 1994), and even begun collecting insects outside of Missouri in other states such as Texas, Arizona and Florida. Although I was still cutting my teeth as a collector, I yearned for the tropical experience, and in December 1989 to January 1990 I got the chance to spend three weeks in one of the most tropical localities I could imagine—Ecuador! I’ve collected in many countries since then, but that first tropical collecting trip remains one of my most cherished experiences.

Of course, being as young and green as I was, I didn’t really know what any of the insects I was collecting were beyond family level (if that!), and the numbers were so overwhelming compared to anything I had experienced previously that all I could do was collect as much as I could using the techniques I had figured out to that point, process them all when I got back, and then hold them for the future when I would either study them myself or make them available to other specialists. In the years since, Buprestidae have become the primary focus of my studies, relegating any non-Nearctic Cerambycidae in my collection to the sidelines. Since I don’t now and probably will never do serious work on Neotropical Cerambycidae, I’ve begun sending them to specialists who do work on them for identification or to be utilized as desired in their research. Much of the Cerambycidae were sent to Frank Hovore, an expert of Ecuadorian Cerambycidae who kindly identified them for me before tragically passing away while on a collecting trip to that very country. Some of the larger specimens were not sent, however, because I had used them to create an “Oh wow!” drawer (see photo on My Collection page). After Frank’s passing, I decided to try identifying the longhorned beetles in that drawer, most of which I was able to identify using Larry Bezark’s incredible website, A Photographic Catalogue of the Cerambycidae of the [New] World. There was one, however, that I was not able identify, despite the fact that it seemed to be the most easily identifiable of all due to remarkable horn-like processes arising from the top of the mandibles. I scanned repeatedly through the photos of species in all genera that looked even remotely similar. Criodion seemed most likely, but none of the species photographed sported such unique mandibular armature. 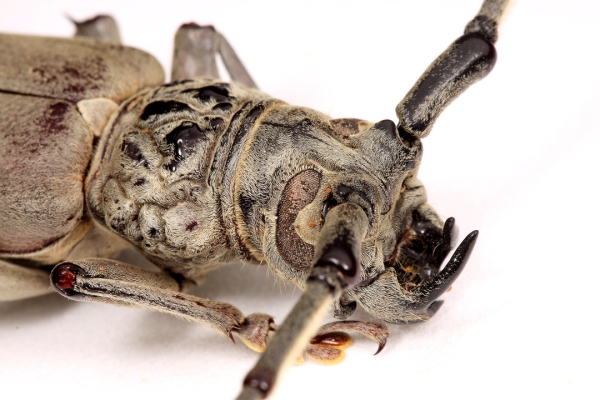 Stumped, I emailed the top photo to Brazilian coleopterist and cerambycid specialist Antonio Santos-Silva (Universidade de São Paulo) and asked for his opinion. He replied that it seemed to be a species of Criodion, noting that the only species of Criodion with this kind of mandible is C. rhinoceros—known only from the Brazilian state of Pará, and a species completely lacking in their collection. I sent him the other photos in this post to give him a better view of the mandibles, and Antonio replied back that both he and colleague Ubirajara Martins agree with the initial ID. My failure to match the specimen with this species in the photographic catalogue was understandable, as this was one of the few species for which no photographs were available. That situation has since been corrected, and the site now features photographs of both male and female specimens—the latter exhibiting quite chunky but not nearly as grossly developed mandibles as the former.

A lateral view of the head resembles that of a rhinoceros!

Bates’ (1870) original description, based only on the male, notes that the spines arise from the upper edge of the mandibles near the middle and incline towards each other, crossing at the apices and giving the head of the beetle, viewed in profile, the curious resemblance to that of a rhinoceros. Certainly no other species in the genus bears such extraordinary modifications of the mandibles, and if there are others in the family, I am not aware of them and they must be very few in number. One can only speculate on the function of such a modification, but since they are present only on the males a sexual or mating-related function could be considered likely. If any reader has information or thoughts about extreme mandibular modifications such as this and their possible functional significance please let me know.

And of course, the BitB face shot!

The collection of this species in Ecuador adds another species to that countrys’ already rich cerambycid fauna (Antonio confirmed that it is a new record for Ecuador). I’ve picked up a smattering of other Cerambycidae from South America over the past ten years, so I’m going to send them all to Antonio for ID and allow him to keep whatever is interesting for his research or the University’s collection. I will include this remarkable species in the package as a gift—considering its status as the only known voucher for the species in Ecuador, I think his institution’s collection will be a more appropriate repository for it than my “Oh wow!” drawer.

10 Responses to The ultimate jaws on a longhorned beetle!