I really wish I could just buy three Canon Speedlite 580EX II flash units, mount one directly on the camera, run the other two wirelessly on each side as slaves, put a nice big soft box diffuser on each of them, and be done with it! I’m beginning to think that’s the only way I’m going to get the kind of full flash insect macro photographs that I want with larger subjects that require the use of my 100mm macro lens. You know what I mean—nice, even, diffuse, vibrant light that comes at the subject from multiple directions (eliminating those annoying specular highlights in the eyes that result from more unidirectional lighting) and with enough power to allow minimal flash pulse durations (resulting in maximum motion freeze). But I can’t—the money is not in the budget, and even if it was I’d have to think seriously about the logistics of carrying and setting up in the field three Speedlites every time I wanted to photograph an (often moving) insect.

Thus, I continue trying to come up with some kind of system that makes the most of my Canon MT-24EX twin flash unit. It’s not that I don’t like this flash unit—I love it because of its light weight (good for field use) and the front-of-the-lens mounting feature that, with its dual heads, gets the flash heads closer to the subject but avoids the “flat” lighting effect of typical ring flash units. In addition, for those shooting insect macro photographs with Canon’s shorter focal length MP-E65 macro lens, the twin flash unit is probably the best choice of all, since the lens is right on top of the subject and it is relatively easy to place diffusing materials between the subject and the flash heads—Alex (Myrmecos) with his tracing paper diffuser and Kurt (Up Close with Nature) with his concave foam diffuser are two of the more successful designs out there. I use my MP-E65 lens a lot, but I use my 100mm macro lens a lot more because many of the beetles I photograph are best photographed at magnification ranges between 0.5–1.0X and, thus, are a little too large for the 65mm lens. The longer lens-to-subject distance of the 100mm lens may be helpful for working with skittish subjects, but it also creates challenges for the MT-24EX because of its relatively low power (more light drop off) and small flash heads (more specular highlighting). For the past couple of years I’ve been using a large sheet of polypropylene foam jury-rigged to the front of the lens, and while it too has functioned fairly well, I keep thinking that if I can just get the flash heads closer to the subject—each fitted with a good diffuser—then it should be possible to achieve results similar to what can be done with the 65 mm lens.

The photos below show the results of some of the ideas I’ve been working on. My main idea was to use extenders that would allow adjustable placement of the flash heads relatively close to the subject and diffuse the light from them with a modified version of the Sto-Fens+Puffers that I have tried in the past. Here is an example of the system mounted on my camera using cheap, flexible arms mounted on a plate attached to the bottom of the camera. If I decide to use this system in the field I would want to purchase much sturdier extenders (e.g. Really Right Stuff), but at only $25 these flexible arms are perfect for proof-of-concept testing. For the modified Sto-Fens+Puffers, I completed the modifications shown by Dalantech (No Cropping Zone) (I was planning to do this when I first tried the Sto-Fens+Puffers but soon found that I preferred the concave and tent designs by Kurt and Alex, at least for use with the 65mm lens). At any rate, to test the ideas I selected a very large (for long subject-to-lens distance), very shiny (for maximum specular highlighting potential) beetle from my collection (Megaloxantha bicolor palawanica, a stunning jewel beetle from Palawan, Philippines) and set it up for “face shots” that simulate my favorite pose for beetles in the field. Keep in mind that this was not intended to be a test of lighting for pinned specimens in the studio—that is not my interest, and there are much better approaches for doing that—but rather a proxy for the kind of lighting and diffusion I might achieve in the field. Here are the results: 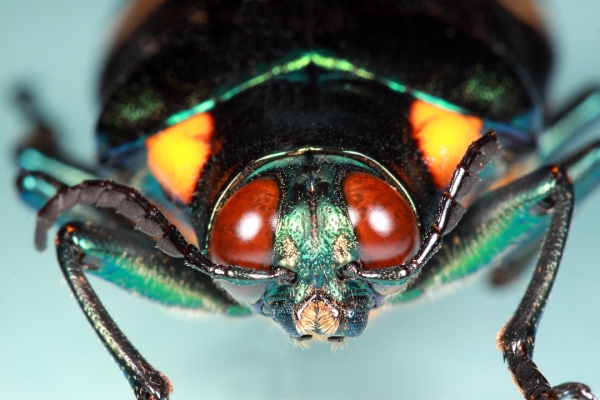 The example above show the results obtained when using the modified Sto-Fens+Puffers with the flash heads mounted directly to the front of the lens. I didn’t try this shot without diffusers, but I doubt it would be much worse than this—specular highlighting is bad because of the small apparent light size, and overall the lighting is not very even with dark shadows and harsh highlights. This shot is a perfect example of the problems inherent in using the twin-flash with a long macro lens. 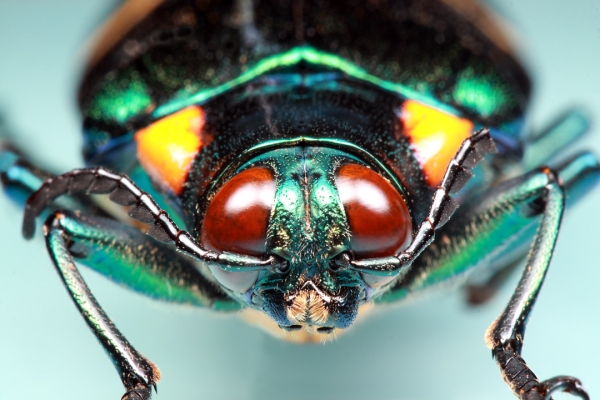 This second shot shows the results when the modified Sto-Fens+Puffers are mounted on the flexible arm extenders and positioned as close to the subject as possible to maximize apparent light size. This was supposed to be the system that gave me the results I was looking for, but honestly I am not impressed. The highlights in the eyes are certainly larger than in the previous photo, and the overall lighting is not quite as uneven, but still the highlights are harsh and fairly sharply defined. Considering the greater difficulty in positioning the flash heads compared to lens-mounted, I have to consider the marginal improvement in lighting not worth the effort.

This third shot has the modified Sto-Fens+Puffers once again mounted on the lens, but also attached is my trusty concave diffuser. Honestly this combination of diffusers provides much better overall lighting and softening of the highlights compared to the previous shot, even though the flash heads are mounted on the lens rather than positioned close to the subject. Apparently the concave diffuser, though further away from the subject, still has larger apparent size and thus allows light to be transmitted to the subject from a larger apparent area. I have not normally used another diffuser between the flash heads and the concave diffuser, but my impression from this shot is that the modified Sto-Fens+Puffers do a good job of dispersing light before it hits the concave diffuser to soften the “hot spots” behind it and provide somewhat more even lighting across its surface.

When I use the concave diffuser, I normally pull the corners back and attach them to the tops of the flash heads with Velcro to minimize light blow back (although how effective it is I really don’t know). Just for kicks, I decided to try some shots with the concave diffuser not pulled back, but left open and extending out over the subject. I did this because that actually more closely approximates how smaller versions of concave diffusers are used with the 65mm lens. The effect was not only remarkable diffusion of light, with specular highlights and hot spots almost completely lacking, but also much better lighting behind rather than just on the front of the specimen. That said, the quality of the light lacks vibrancy and seems somewhat “dead,” perhaps because of the great distance between the flash heads and the diffuser and the MT-24EX units relatively limited power. The large diffuser extending far out in front of the lens might cause problems with bumping and skittish subjects, but I am intrigued enough by this result to continue with some field testing to see what I think. 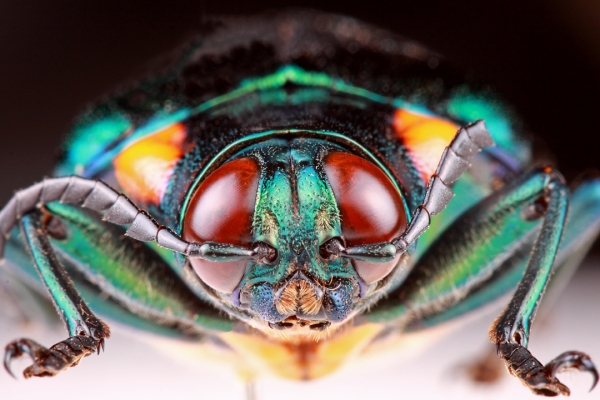 The final shot shows the results of another promising setup—this one again uses the flash heads mounted on flexible arm extenders to get them close to the subject, but instead of the modified Sto-Fens+Puffers I fitted each flash head with a mini SoftBox. This was not easy, as the SoftBox is designed for much larger flash heads than those of the MT-24EX, so I took another set of Sto-Fen diffusers, cut off the face, then hot-glued the SoftBox to the open Sto-Fen. Thus modified it was a simple matter to “snap” the SoftBoxes in place over the flash heads. Despite the term ‘mini’ these Soft Boxes still provide a much larger area for light transmission than the modified Sto-Fens+Puffers, and this much larger apparent light size has a dramatic effect on the overall lighting and diffusion. I’m tempted to say I like this one best. However, I do have to consider ease of function in the field—the lens-mounted Sto-Fen+Puffers and concave diffuser, either open or closed, would certainly be easier and involve no further cost (for better extenders than the cheap flexible arms I now have), but if SoftBoxes on flash heads placed close to the subject gives better results than I may have to go with it.

Will you please help me decide? I setup this little poll so you can tell me which of the systems you thought gave the most pleasing result in terms of vibrant, evenly diffused light. I can’t (to my knowledge) tell who’s voting (and if there is a way don’t tell me because I don’t want to know), so don’t let privacy concerns prevent you from adding your vote—the more voters that participate, the better information I get to help me with my decision.