Step 1. Go to your favorite grassland habitat in the western half of the Great Plains anywhere from Texas north to South Dakota and look for barren soil amongst the vegetation. Clay banks near streams or in ravines and even vertical clay bluff faces are also good (although I have not myself observed the latter). “My” spot is in the Glass Mountains of northwestern Oklahoma, where talus slopes in mixed-grass prairie beneath flat-topped mesas and the ravines that cut through them provide just enough slope for this species’ liking.

Burrow diameter of ~8mm identifies this as a 3rd instar larva.

Step 2. Look for large, almost perfectly round burrow entrances that go straight down from the surface. By large, I mean approximately 6–8 mm in diameter—as large a burrow as any tiger beetle in North America will make. Many other insects create burrows, but tiger beetle burrows are generally recognizable by their almost perfectly circular shape and clean, beveled edge. Look closely, and the burrow will be seen to actually be slightly D-shaped to match the shape of the tiger beetle larva’s head—the large, sickle-shaped, upward-facing jaws resting against the flat part of the D. In the case of this species, they tend to be found in clusters of several burrows in close proximity to each other. The burrow in these photos was found at the upper edge of a drainage ravine on the upper part of the talus slopes (see diagram in this post).

Dig around the burrow, carefully excavating along the grass stem, until the larva is reached.

Step 3. Try this first—chew the end of a long, narrow grass stem (frayed and sticky will be easier for the larva to grab hold of) and stick it down the burrow until it hits bottom, tap lightly a few times to entice a bite, then yank (and I mean yank!) the stem out. With luck, the larva will come flying out of the burrow and land somewhere on the ground in front of you. (By the way, if you have never done this, you are missing one of the greatest treats that insect collecting has to offer. If you have done it, you owe it to yourself to show this to somebody else who has not ever seen it—their shocked reaction at the sight of the flying larva is beyond priceless!) Larvae are not always in the mood to bite, however, so if the so-called “fishing” technique does not work then you will have to dig. Stick the grass stem back down the burrow and begin excavating around the burrow, carefully prying away the soil adjacent to the burrow to prevent it from falling into and obscuring the burrow. Keep excavating as you follow the grass stem down until, at least, you reach the larva. In the photo above you can see in the lower right-center area the burrow with the grass stem protruding from it and the larva placed on a clump of soil in front of the shovel (for sense of scale). It seems I had an easy time of it with this larva, as literature sources report larval burrows extending down to depths of a meter or more.

Step 4. Behold the beast! There is nothing more that can be said—these larvae are ginormous! This particular larva measured a full 62 mm from the tips of its mandibles to the tip of its abdomen—that’s 2½ inches! No other tiger beetle larva in North America reaches this size, except perhaps the related A. hoversoni (South Texas Giant Tiger Beetle). 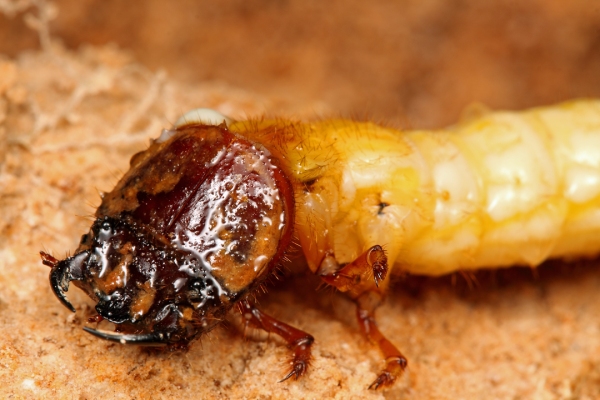 Step 5. If size alone isn’t enough, you can confirm that the larvae does indeed belong to the genus Amblycheila by looking at its eyes—their are two pairs, and the 1st pair (closest to the mandibles) are distinctly larger than the 2nd pair. This isn’t clearly visible in the photo above because I doused the larva with water to remove the mud and dirt that encrusted it upon removal from its burrow.

…and the distinctly separated hooks on the 5th abdominal segment confirm it is Amblycheila.

Step 6. Another way to distinguish larvae of the genus Amblycheila is by looking at the hooks on the hump of the 5th abdominal segment, best done with a hand lens (or, even better, with an MP-E65 lens!). All tiger beetle larvae have several pairs of large hooks that the larva uses to brace itself against the wall of its burrow when capturing prey to prevent the struggling prey from pulling the tiger beetle larva out of its burrow. Larvae in the genus Omus, restricted to the Pacific region of North America, have three pairs of hooks (referred to as the outer, middle, and inner hooks), while all other North American tiger beetle genera have two (having lost the outer pair). In Amblycheila and Tetracha the hooks are simple and thornlike, while larvae of all other North American genera have much longer middle hooks that are curved and sickle-shaped (e.g., Cylindera celeripes in this post). Amblycheila larvae can be distinguished from Tetracha larvae by the middle and inner hooks on each side being distinctly separated rather than touching at the base (e.g., Tetracha floridana in this post). There is also a cluster of short, stout hairs around the base of each hook in Amblycheila that is missing in Tetracha (e.g., Tetracha virginica in this post).

The numerous stout setae are also characteristic of the genus.

Step 7. Lastly, don’t forget to look at the hump in lateral profile—it is as alien a structure as any in the insect world. In the case of Amblycheila larvae, the bed of hairs posterior to the hooks is comprised of much shorter, stouter, and more densely placed hairs than larvae of Tetracha.