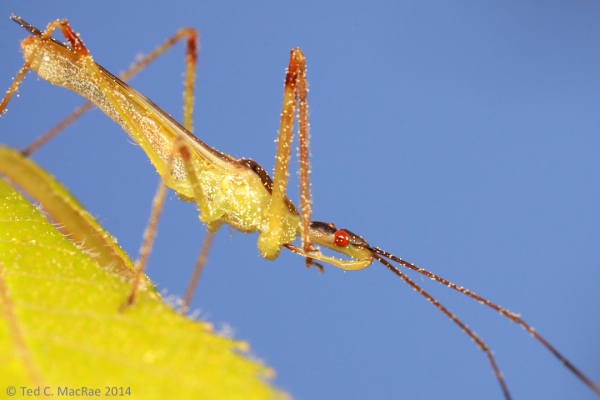 As my friend Rich and I set out a week ago Sunday on the final stretch in our quest to hike the 350-mile Ozark Trail in its entirety, I saw this slender, green assassin bug (family Reduviidae) sitting on a tender young leaf of an oak sapling. I already had my camera out but had outfitted with the 65-mm, 1–5× macro lens in anticipation of small beetles that I wanted to photograph on dogwood flowers. Nevertheless, it was still a bit on the cool side, making me think I might yet succeed in getting off some super-closeup shots of this delicate predator. I managed to carefully snip the leaf from the sapling and move the bug up close to the camera for a nice, blue-sky background shot, but one shot is all I got—as soon as the shutter clicked the bug took flight and left me with this single photo. As I have observed to usually be the case, the body of this individual is thickly covered with debris, which I take to be pollen from the abundant oaks at the height of their flowering period.

I’ve seen this species regularly over the years during my springtime forays in upland, oak-hickory Ozark forests. I presume the species is Zelus luridus, based on an online synopsis of the genus Zelus in eastern North America. As true bugs go, assassin bugs are undeniably cool—sometimes large, often colorful, and pure predators! Interestingly, these bugs have adopted a rather diverse array of strategies to assist their predaceous habits, mostly involving modifications of the front legs. Some involve a more typical raptorial design (similar to mantids) with chelate surfaces or even spines on the femora and tibiae, while others have developed flexible, cushion-like structures on the tips of the tibiae to aid in prey handling (Weirauch 2006). Gross morphological modifications, however, are not the only strategy employed by assassin bugs—some groups use secretions either to paralyze or immobilize their prey. Species in the genus Zelus employ the latter strategy—essentially using their front legs as “sticky traps”. The sticky substance is derived from glands on the front legs and is used to coat numerous, microscopically branched setae on the legs called “sundew setae” in reference to the similarity of appearance and function with insectivorous sundew plants. Interestingly, sundew setae have also been found on other parts of the body, at least in first-instar Z. luridus nymphs, leading to speculation that they may also serve some other function besides prey capture. Perhaps these setae explain why most individuals I see are so debris-covered, as with the pollen-laden individual above.