In going back through the photos I accumulated during my recent “fall tiger beetle trip” and reading the periodic updates that I provided along the way, I fear that I gave unfairly short shrift to one of the most scenic areas that I visited. Part of this was due to my preoccupation with and excitement at having found Cicindela nebraskana (prairie longlipped tiger beetle), whose distribution just barely sneaks into the extreme northwestern corner of Nebraska. The beetle makes its home in the mixed-shortgrass prairies lying above the Pine Ridge, a north-facing escarpment where exposures of deep sandy clay sediments intercalated with volcanic ash have been carved into dramatic buttes, ridges and canyons. Cloaked in ponderosa pine (Pinus ponderosa), with riparian ribbons of green ash (Fraxinus pennsylvanica) and cottonwood (Populus deltoides) – during my visit showing the earliest hints of their vivid autumnal yellow dress, the Pine Ridge is not only one of Nebraska’s most dramatic landforms but also bears significant historical importance. It is here where the the final chapter of the Sioux and Cheyenne resistance to white settlement of the northern Plains took place, with the 1877 murder/assassination of Crazy Horse at nearby Fort Robinson, after he had surrendered to U.S. troops, all but sealing their fate.

In dramatic contrast to the forested escarpment and gentle prairie that lies atop it, a stark, otherworldly landscape spreads out below the nearly 1,500-foot drop down the escarpment from the High Plains above. I refer, of course, to the Nebraska Badlands, a southern sliver of the same landscape whose heart – Badlands National Park – draws almost a million visitors a year. For the past several hundred thousand years, water and wind have carved the deep Oligocene sediments into an eerie maze of ravines, pinnacles, gullies, and sharp-crested hills. Desolate and arid, it would seem that nothing could live in this hot, naked landscape that early French-Canadian fur trappers called les mauvaises terres à traverser – “the bad lands to cross.” In fact, life abounds in the Badlands – pronghorns, deer, jackrabbits, and of course – tigers! 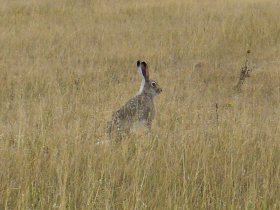 Our search for Cicindela nebraskana in the high prairie, though already successful, was brought most inconveniently to an end when a line of showers moved over us. It was probably a good thing, as we were forced to move on and give ourselves a chance to see different things. I could have easily ended up frittering away the remainder of the afternoon endlessly scanning the narrow cow paths that crisscrossed the prairie in hopes of finding “just one more” of the little beetles that just a few hours earlier had been only a hope. Matt asked me if I wanted to see C. lengi or C. fulgida first. I looked at the sky – cloudy over the prairie and sunny to the north over the Badlands – and voted for the latter. I had been marveling at the Pine Ridge on every approach during the day, and dropping down the face of the escarpment through Monroe Canyon provided yet another spectacular vantage. As soon as we arrived on the plain below, the road turned to gravel and the landscape morphed into a patchwork of sparse, dry grass amongst barren exposures of multicolored earth. I looked out at the barren exposures – seemingly ideal habitat for tiger beetles – and asked Matt what species were out there. He shook his head and said, “Nothing lives there.” 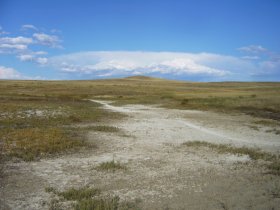 Our destination was a dry, alkaline creek several miles north in the Oglala National Grassland (administered, somewhat ironically, by the U.S. Forest Service). Matt had seen Cicindela fulgida (crimson saltflat tiger beetle) darting over the salt-encrusted ground amongst bunches of saltgrass on a previous visit, and after some back and forth searching we finally located what we hoped was the correct spot. Only small strips of alkaline soil were seen at first, but as we moved further away from the road the alkaline patches became much more expansive. Although dry, the habitat looked perfect for C. fulgida, and it didn’t take long for Matt to flush one from the bunches of saltgrass. Unfortunately, that would be the last individual we would see for the day. Another hour of searching yielded no more, and eventually the showers that chased us from the mixed-shortgrass prairie above would put an end to our fulgida-search, also. I would have to be content with having had seen one as I admired the fantastical displays of rainbows and virga brought over us by the unsettled skies. 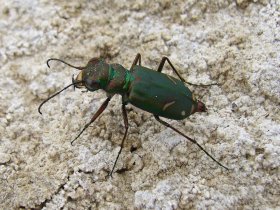 Cicindela fulgida was not, however, the only tiger beetle species we found living in this harsh environment. Cicindela purpurea (cow path tiger beetle) is not nearly so choosy as its common name implies, occurring in virtually any open, clay habitat without regard to its alkalinity. Western Nebraska populations are assignable to subspecies audubonii,

which occurs broadly across all but the most southerly Great Plains and Rocky Mountains, although I am loathe to accept the validity of this subspecies due to the existence of a broad zone of intergradation in the eastern half of the prairie states with eastern nominotypical populations. Regardless of its taxonomy, C. purpurea is quite abundant in western Nebraska and appears in two distinct color forms – green and black, the latter of which I was quite excited to see. It took quite some effort to finally obtain the acceptable photos that I show here – especially with the black individuals since they were not so commonly encountered.

It was hard to get close, and when I managed to get close they would more often than not run just as I was about to snap the shutter. As evidence of the frustration I experienced trying to get a photo of the black form, I include here an example of an early attempt that, for some reason, I spared from a quick punch of the ‘Delete’ key (click on it to experience the full extent of my frustration). I also lucked into spotting this female that had captured a blister beetle (family Meloidae), apparently unphased by the toxic cantharidins (and active ingredient in ‘Spanish fly’) present in the hemolymph of its prey. Lucky is the fellow who encounters this female once she finishes her meal!

Almost as abundant as C. purpurea was C. tranquebarica (oblique lined tiger beetle). This is another species that is not too fastidious about its habitat – sand, clay, alkaline or not, as long as there is some amount of water nearby this species will be satisfied. Like C. purpurea (and many species of tiger beetles, in fact), western populations in the Great Plains and Rocky Mountains are considered subspecifically distinct from eastern populations, but with that annoyingly broad intergrade zone running down through the eastern half of the prairie states.

In the case of this species, western populations are called subspecies kirbyi, differing in a most insignificant manner by their widened elytral maculations. I’ll let the reader infer how I feel about the validity of such subspecific distinction. Larval burrows of this species are often found in very high densities, and considering its abundance at this site I suspect these might be the larval burrows of that species. I spent quite a bit of time trying to fish out larvae from these burrows but ended up with only one. There are, however, other species of tiger beetles that live in these alkaline habitats, including the highly desirable Cicindela terricola (variable tiger beetle) which just sneaks into western Nebraska, so I’m not making a call on its identity yet. It’s now enjoying its new burrow in a container of alkaline soil sitting on my lab bench, and just yesterday it ate a nice, fat fall armyworm larva for lunch.

5 thoughts on “Tigers in the Nebraska Badlands”