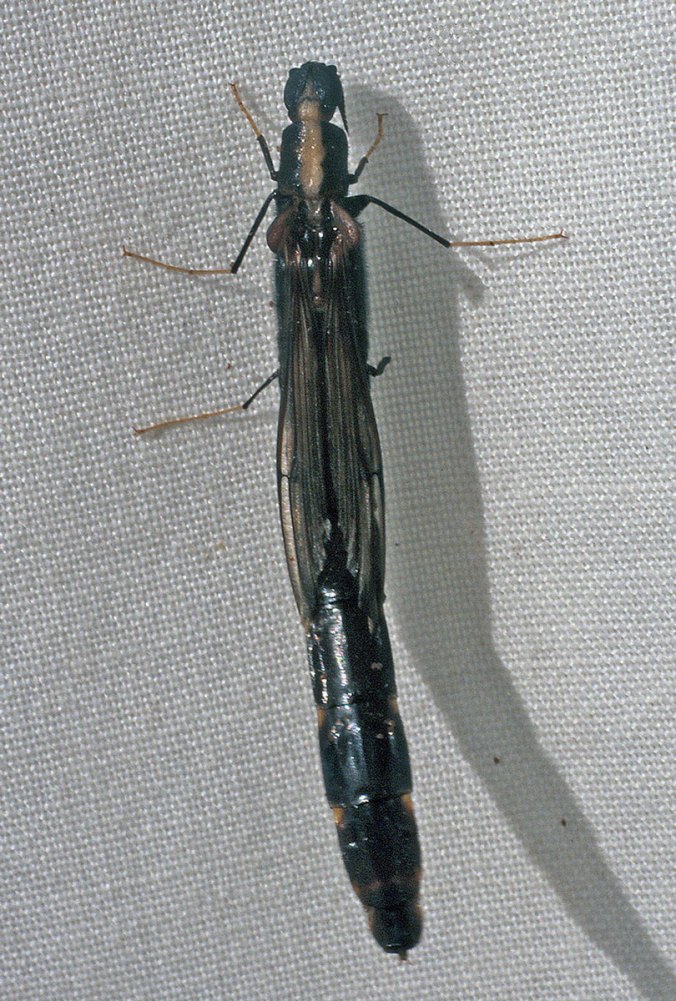 One of the more unusual, and enigmatic, beetles that I encountered in South Africa was this beetle in the pantropical genus Atractocerus.  Placed in the family Lymexylidae (ship-timber beetles), species in this genus look less like beetles than they do large flying ants or strange damselflies due to their highly reduced elytra that expose their greatly elongated abdomen and leave the hind wings uncovered.  The hind wings also are unusual in that they are held fan-like in repose rather than folded as in most other beetles.  Atractocerus brevicornis is the only species in the genus found in Africa (Scholtz & Holm 1985).

Adults are attracted to light at night, as was this individual that came to our ultraviolet light at Geelhoutbos farm below the Waterberg Range in Limpopo Province. Nothing is known about the biology of Atractocerus, but larvae of other genera are reported to bore into hardwoods and palm stems (Picker et al. 2002). Larvae of the genera Lymexylon and Melittomma are believed to form symbiotic associations with ambrosia fungi that grow on the walls of their galleries (Young, 2002).  Adult females deposit fungal spores in a sticky matrix when they lay their eggs, and the hatching larvae carry the spores into wood on their bodies.  The large eyes of Atractocerus, however, suggest a predatory lifestyle. The common name of the family originates from a northern European species that has in the past been a destructive pest of ship timbers.

Atractocerus species are rarely encountered and therefore, not well studied. Their evolutionary history is still unknown; however, the oldest known lymexylid fossil is a very primitive member of the genus Atractocerus preserved in 100 myo Burmese amber (Grimwold & Engel 2005). Thus, the lineage containing these beetles had already appeared by the mid-Cretaceous and may have originated as early as the Jurassic, a fact that has earned them the moniker “living fossils.” These beetles were once thought to be among the most primitive of all Coleoptera – their simple wing venation, almost undifferentiated antennae and tarsi, and naked abdomen being likened to a supposed neuropteran common ancestor. Most authors now consider the family to be most closely related to the cucujiform groups Cleroidea and Cucujoidea (Wheeler 1986, Young 2002), although some have placed it in the Elateriformia near the Lampyridae based on wing venation. Scholtz and Holm (1985) accepted a cucujiform placement but related the group to the Styopidae (twisted-winged parasites), apparently due to the similarity of their highly reduced forwings.  At the same time, they acknowledged the many morphological and behavioral differences between the two groups, the latter itself being the subject of much evolutionary debate due to disagreement about whether the reduced forwings of male stylopids are truly homologous to the elytra of Coleoptera (some have even suggested homology with the halteres of Diptera that were switched from the metathorax to the mesothorax as a result of homeotic mutation). Most authors now place this latter group in the separate order Strepsiptera.

Wheeler, Q. D. 1986. Revision of the genera of Lymexylidae (Coleoptera: Cucujiformia). Bulletin of the American Museum of Natural History 183:113-210.