A few days ago I learned of a new campaign by The WILD Foundation called “Make a Big Impact with Small Change.” Founded in 1974, WILD seeks to protect intact wilderness areas and the wildlife and people who depend upon them. Their new campaign pays homage to dung beetles – usually overlooked by conservationists in favor of the so-called “charismatic megafauna,” but who nevertheless provide an important ecological service by tirelessly processing megafaunal dung. From the WILD website:

Here at The WILD Foundation, we realize that it is not just those large, charismatic animals that inspire conservation – it is often the small, typically unnoticed and vastly under-appreciated ones that inspire us the most….and that are an indispensible part of the ecosystem!

As a way of generating support for their work, WILD is giving away bumper stickers like the one pictured above. I have got to have one of these bumper stickers! It is the best entomology bumper sticker I’ve seen since “I fear no weevil!” The WILD website also features this amusing little video that shows some dung beetles in action:

more about “I Brake for Dung Beetles!“, posted with vodpod

The website doesn’t provide any clues as to the species of dung beetle or where it was recorded, but judging by its large size I’m guessing that it might have been recorded in Africa, perhaps representing a species of the genus Scarabaeus.  My most memorable dung beetle experiences occurred in Africa, which is blessed with a dizzying diversity of “dungers.”  Following is an excerpt from an article I wrote that appeared in the December 2008 issue of the SCARABS Newsletter, in which I discussed some of these marvelous beetles:

Chafers were not the only scarabs I encountered in abundance at Borakalalo [National Park], and I’ll give you one guess as to what other scarab group I encountered in abundance at this mammal game reserve. That’s right, dung beetles. Never before have I seen such an abundance and diversity of dung beetles in one spot, but then again, never before have I seen such an abundance of dung!  The ground was littered with the stuff – antelope such as gemsbok  and impala, warthogs, giraffes, and a host of other mammals thrive in the protected confines of the park, and the seasonally dry climate allows their dung to dry quickly and accumulate rather than breaking down and disappearing. It did, however, take a few days before I became aware of the area’s dung beetle diversity. Prior to our arrival in the park, the weather had been dry for some time, and so it remained for the first few days we were there. I collected a smattering of different dung beetles during that time, but it seemed like they should be more abundant considering the abundance of available resource. Our third day in the park was interrupted by heavy thundershowers that moved through during the afternoon. The next morning, as we arose and begin wandering away from the camp, the air seemed literally abuzz with dung beetles. They were flying everywhere and crawling all over the ground, frantically rolling and fighting over the reconstituted pieces of dung. Big, black scarabaeines proper such as Kheper clericus (Boheman) and Scarabaeus galenus Westwood (Photo 4), the small metallic 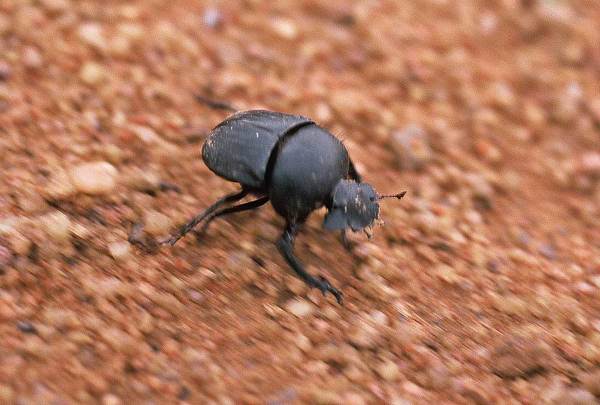 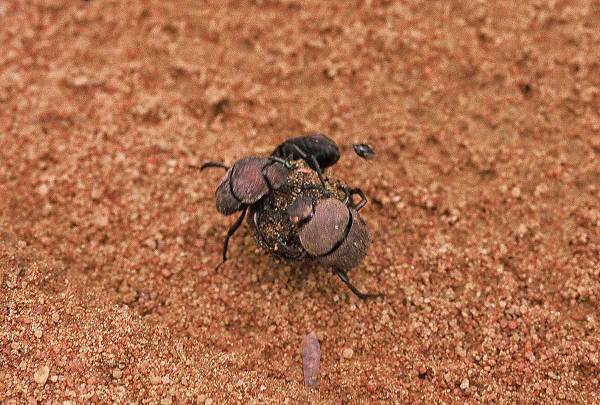 and the tiny little Sisyphus costatus (Thunberg),  standing tall on its elongated hind legs while pushing dung with its forward pairs of legs (opposite of what I’ve seen in any other dung beetle), all made their sudden appearance. I spent some time  watching one S. galenus individual excavating a burrow for the prized piece of poop it had snatched (Photo 6).

The most impressive dunger that I saw, however, was the enormous, flattened Pachylomera femoralis Kirby (Photo 7). 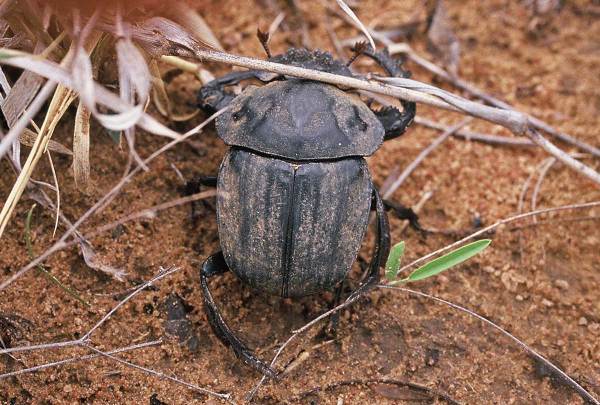 Looking like flying Tonka trucks and sounding like diesel engines from real trucks, their low-pitched, rumbling buzz filled the air as they searched among the freshly moistened turds. So loud was the noise caused by the beating of their wings that several times I ducked thinking one was about to collide with me. This sudden dunger super-diversity continued into the night, as Anachalcos convexus Boheman, Catharsius sp., Copris elphenor Klug, Metacatharsius sp., Pedaria sp., Scarabaeus goryi (Laporte), three species of Onitis, Caccobius ferrugineus (Fåhraeus), Digitonthophagus gazella (Fabricius), and nearly a dozen species of Onthophagus flew to our ultraviolet light-illuminated sheet.

16 thoughts on “I Brake for Dung Beetles!”