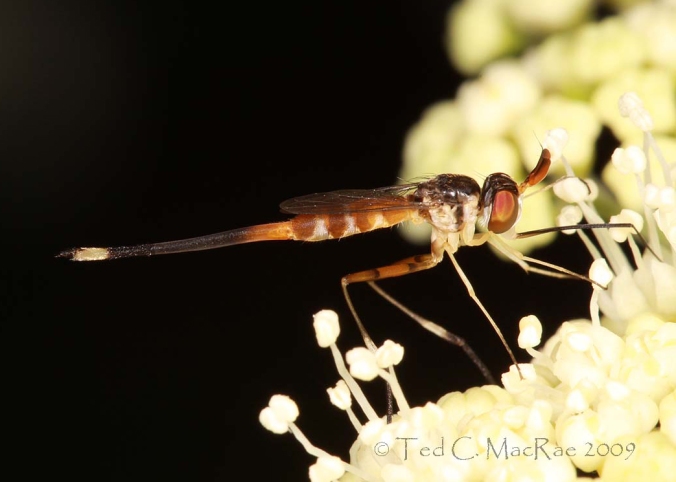 While photographing the rare Typocerus deceptus on flowers of wild hydrangea (Hydrangea arborescens) at Trail of Tears State Park in southeast Missouri last June, I encountered this strange fly also visiting the hydrangea blossoms.  At first I thought it was some weird type of syrphid fly, but it turns out to be a member of an even more unusual group of flies in the appropriately-named genus Stylogaster¹.  Although classified in the family Conopidae (thick-headed flies), members of this genus are placed in their own subfamily (Stylogastrinae) due to their unusual morphology and biology (obligate parasites of crickets, cockroaches and calyptrate flies).  Ninty-two described species are currently placed in the genus, only two of which occur in North America (the remainder are found chiefly in the Neotropics and in sub-Saharan Africa and southeast Asia).  This individual appears to be a female S. neglecta because of its short 2nd antennomere (antennal segment) and highly elongate 3rd antennomere (in S. biannulata, the 2nd antennomere is almost as long as the 3rd). Thus, the “overlooked, needle-tailed, thick-headed fly” – and who said common names are easier?

¹ Derived from the Latin stilus (needle) and the Greek γαστηρ (belly, stomach), a reference to the highly elongated female abdomen, or “tail.”

Morphologically, stylogastrines are distinguished from other conopids by their eggs, which feature a rigid barbed tip.  This, along with some behavioral observations, seems to imply a shooting oviposition technique; however, morphological evidence suggests that the eggs are forcibly jabbed into their hosts (Kotrba 1997).  The larvae hatch and develop inside their host as internal parasites, but other than the egg very little is known about the life histories of species in this genus (Couri and Pont 2006).  Adults are further distinguished by their long proboscis, which exceeds the length of the body when fully extended and is used to access nectar within a variety of flowers.  Adult females aggressively intercept hosts in-flight for oviposition, and speculation has been made that they are obligate associates of army ants (New World subfamily Ecitoninae and Old World subfamily Dorylinae), relying upon the ants’ raiding columns to flush out their prey.  However, since the genus also occurs in Madagascar and parts of Africa where army ants are completely absent, it is clear that at least some species of Stylogaster have no obligatory association with these ants (Stuckenberg 1963, Couri and Pont 2006).

Kotrba, M. 1997. Shoot or stab? Morphological evidence on the unresolved oviposition techique in Stylogaster Macquart (Diptera: Conopidae), including discussion of behavioral observations. Proceedings of the Entomological Society of Washington 99:613-621.

Stuckenberg, B. R.  1963.  A study on the biology of the genus Stylogaster, with the description of a new species from Madagascar.  Revue de Zoologie et Botaniques Africaines 68:251-275.