Clubmoss along the Ozark Trail

It has been a long, hard winter – one of the toughest I can remember during my years here in Missouri in terms of amount and frequency of precipitation and persistent cold temperatures. Tough winters, however, are no deterrent to my favorite wintertime activity – hiking. I’ve mentioned several times the goal of my friend Rich and I to hike all 350 miles of the Ozark Trail.  We’re at ~250 miles now (more than 2/3 done), thanks to the two 10-mile stretches of the Wappapello Section that we did on the days after Thanksgiving and New Year’s.

Hiking these trails is an opportunity to imagine the Ozark Highlands in their wild, pre-settlement state – expansive hardwood forests covering miles and miles of rugged up-and-down terrain.  Of course, try as I might to pretend otherwise, the Ozarks have changed, and evidence of man’s pervasive presence are everywhere.  Some are overt, such as this mass grave of domestic cattle, dumped by their former owner for others to worry about when disease prevented them from realizing their economic potential.  Others are much more subtle, but to the discriminating naturalist they are everywhere – even in the most pristine-looking of areas.  A cedar-choked glade here, it’s rich, tawny, native warm-season grasses pushed the margins and interspaces; a monotonous, stunted black oak forest there, sprigs of herbaceous plants giving a hint of the diverse understory just waiting for a fire to bring back the more open woodland it needs to thrive.  Settlement has brought with it not only direct impacts to the land, but also changes in its ecology and vegetational character.  Once a fire-mediated landscape with shifting mosaics of bald ridges, grassy woodlands, and riparian forests, a century of logging, grazing, and fire suppression have turned much of the Ozark Highlands into homogenous stands of oak with depauperate mid- and understories.

While loss of diversity has been the overwhelming trend in response to settlement, additions to the state’s flora are also being seen.  The Wappapello Section is the southeasternmost of all the Ozark Trail sections, lying almost entirely in Wayne County, and as we traversed the rugged terrain north to Sam A. Baker State Park, we encountered this most unusual of plants – a clubmoss.  Since they are vascular plants, clubmosses are not really moss (which are non-vascular).  Clubmosses are not flowering plants either, nor do they even produce seeds, reproducing instead by spores – just like ferns, horsetails, and other ‘primitive’ (sorry, Alex!) vascular plants.  Practicing botanists include them in a group known as “fern allies”, meaning that they are not ferns (ferns have multiple branching veins in their delicate fronds, while clubmosses have a single vein in their small, scale-like leaves), but they are somewhat like them.

This particular clubmoss belongs to the genus Lycopodium, or ground cedars – the name obviously derived from the resemblance of their foliage to various gymnospermous plants known as cedars (though completely unrelated) but growing very low to the ground. There are three species of Lycopodium in Missouri (Yatskievych 1999), all confined to the Ozark Highlands and all considered species of conservation concern due to their rarity in the state (Missouri Natural Heritage Program 2010).  Two of these species are highly restricted (designated S1 for “critically imperiled”), boreal species occurring only on moist sandstone bluffs in Ste. Genevieve County as Pleistocene relicts – holdovers from a time when glaciers advanced to within about 50 miles to the north and cool, wet conditions prevailed throughout the rest of the state.  The third species, shown here, is Lycopodium digitatum.  Although more widespread in the cool forests of the northeastern U.S. and Canada, it is apparently expanding its range and was first found in Missouri in 1993.  While still considered uncommon (and accordingly designated S2, or “imperiled”), its range has since expanded to a core of several southeastern Missouri Ozark counties that include Carter, Iron, Madison, Reynolds, and Wayne Counties (Doolen and Doolen 2008).  We found this colony at the base of a moist wooded slope amongst an invading stand of Juniperus virginiana (ironically, called “cedars” by local residents). 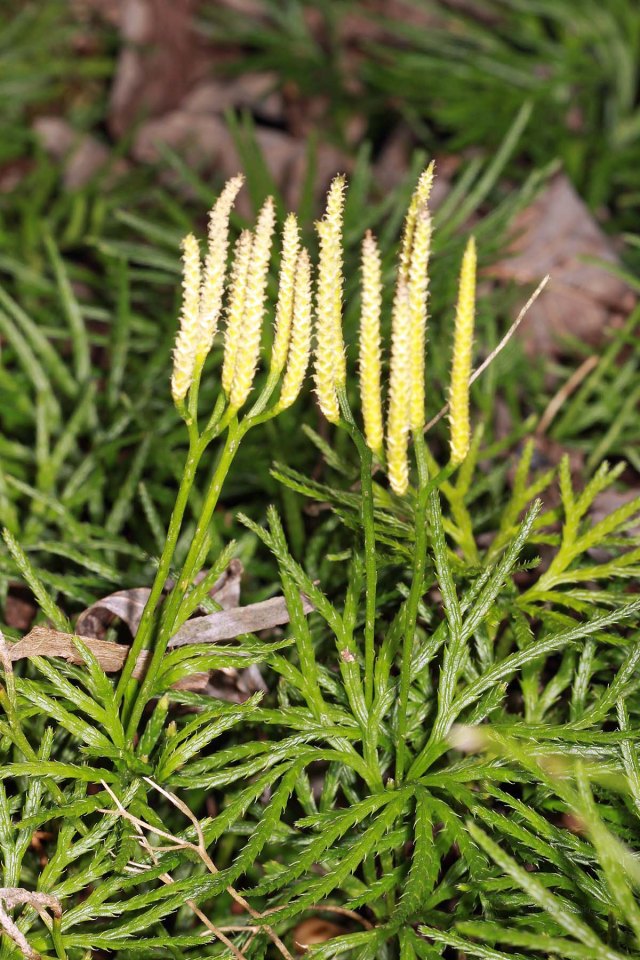 “Running ground cedar” has been used as a common name for L. digitatum, most likely due to its habit of spreading by rhizomes – or “runners” – along the soil surface.  From a distance, the spore-producing strobili stood out in bright yellow contrast to the dark glossy green foliage that carpeted the ground – itself in stark contrast with the surrounding brown leaf litter.  It is these club-like strobili from which the common name “clubmoss” is derived, and from a distance of 20 m away I knew instantly that this was something unusual and worthy of investigation.  Despite the gray November skies and cool temperatures, the strobili were actively shedding spores – clouds of yellow dust swirling briefly with each knock of the finger before dissapating into the air. 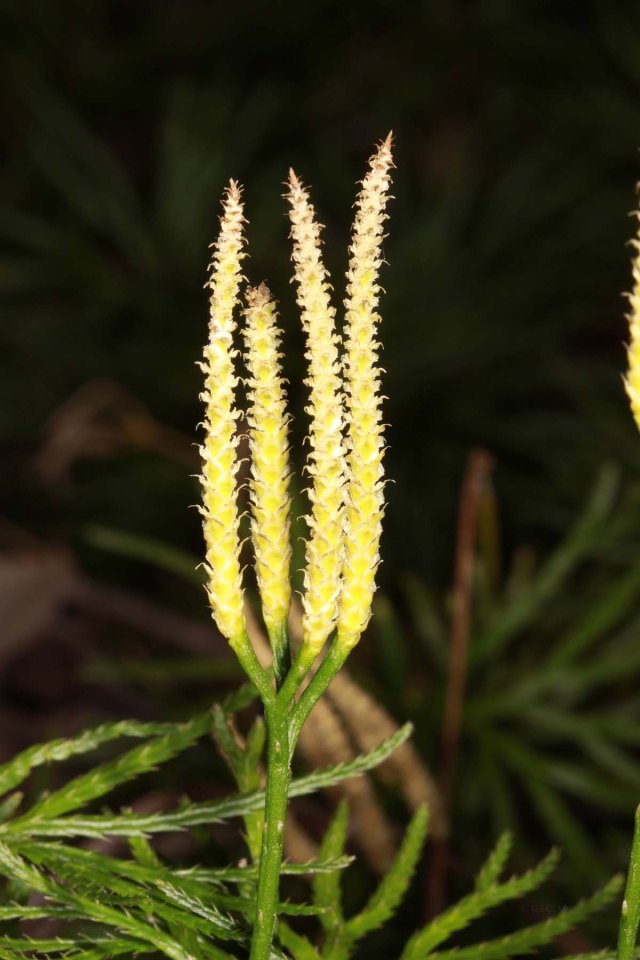 Hundreds of millions of years ago, the Carboniferous earth was covered with vast forests of giant clubmosses – extinct relatives of this species that soared to heights of one hundred feet. These giants eventually gave way to new kinds of plants – first the seed-bearing conifers, and later the flowering angiosperms. The giant clubmosses are gone, but their descendents have survived the vastness of time, represented today by these humble, diminutive forms – extant members of an ancient group hiding in the nooks and crannies of the modern flora. I don’t know whether the recent appearance of L. digitatum in the Ozark Highlands is a result of the anthropogenic changes brought upon the area in recent years, but given its ancient, relictual qualities, it is one change in the flora of Missouri that I do not mind.

19 Responses to Clubmoss along the Ozark Trail