Granted, the progress of spring seems to advance in halting baby steps with occasional falls onto its muddy bottom, rather than as a determined forward march, but spring is welcome, no matter how it arrives. When little green tips start poking up and there’s a bit of that “spring smell” in the air, I simply must get out and catch up on the status of Nature — the old-fashioned way (she doesn’t have a Facebook account). Over the last week, I’ve gone forth in search of signs that everything else living is about as tired of winter as I am, and wants to get this spring show on the road! There is already so much happening, I can’t recount it all here — A partial list of unphotographed notables: owls breeding; hawks nesting; woodcocks doing their silly, repetitive and almost invisible (because it’s nearly dark) courtship displays; wood ducks on forest ponds; year-round resident songbirds reestablishing territories; spring peepers, chorus frogs, wood frogs and southern leopard frogs singing, especially in the fishless ponds; winter crane flies and midges swarming in sun flecks in the woods; wild filberts, silver and red maples flowering, etc… 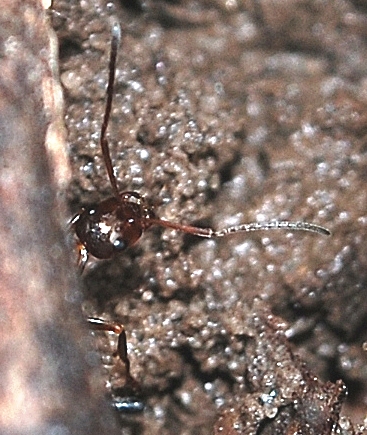 Of course, I look for the first ants out at this time of year, though with the exception of 10 March, when the temperature exceeded 70F, they haven’t been notably active. However, that afternoon I encountered, among others, a worker of Formica pallidefulva poking its head out cautiously to sniff the spring air. This is one of my favorite local ants — largish (5-6mm), abundant, active in daylight even when it’s hot, usually shiny bronzy red to red-brown, usually with a darker gaster (the apparent abdomen of ants) around here, but ranging from a beautiful reddish gold (in the deep South) to almost pure black-coffee brown (New England and southern Canada) across its wide geographic occurrence (Rocky Mountain foothills of Wyoming to New Mexico, all the way east to Québec and Florida). It has the added charm of being the host species to a wide range of social-parasitic and dulotic (“slave-making”) ants both in its own and in another closely related genus, with which it lives in temporary or permanent mixed colonies (as with the Polyergus illustrated in my last post). The image below of these ants bringing home a charred earthworm was taken almost one year ago, as one of Shaw Nature Reserve’s prairie areas was beginning to resprout after a prescribed burn a few weeks earlier. Ants will take their food raw or cooked! 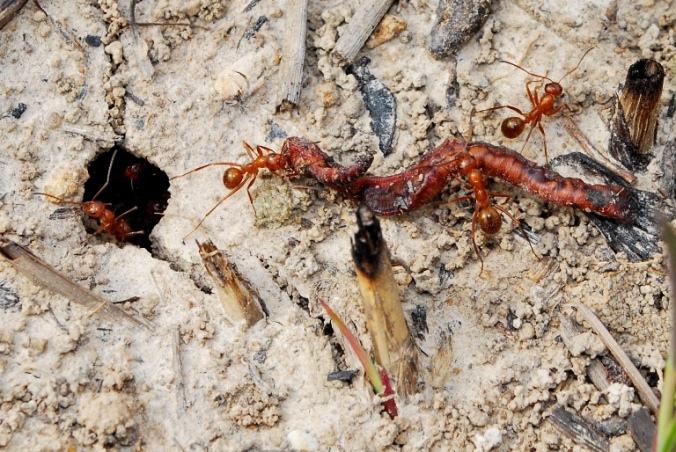 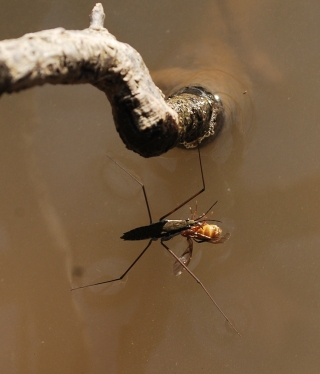 Another ant I mentioned last time I was with you, Prenolepis imparis, has the distinction of being the only ant in our fauna that has mating flights while there is still a good chance of frost in the forecast for the next few weeks. In this picture of a mating pair at  BugGuide, note the size difference that inspires their name “imparis”, Latin for disparate. Any time after mid-February when it is sunny and not too windy, and the temperature rises above 65F, the winged males and females reared the preceeding fall, fly out to partake of a grand insectan orgy. Typically, they have big flights on the first couple of appropriately warm days, then some smaller ones (i.e., fewer individuals participating) over the next few weeks. The flying males look like gnats, bobbing up and down in drifting swarms, a few feet off the ground over a shrub, near a woodland edge or in a sunny opening. (One of my co-workers got into the midst of a group of such swarms once when we were conducting a prescribed burn in a wooded area, and I recall her commenting she “felt like Pigpen with all the little bugs flying around”!) The much larger, golden-brown females lift slowly off the ground, fly ploddingly (or is it seductively?) through the male swarms, are there mobbed by the tiny fellows, and then glide away and slightly downward, mating in flight with the winner of the males’ tussling. Rather clumsy fliers, the females do not always land in a good spot, as occurred to this hapless one that ended up as a feast for a water strider. Those that survive break off their wings, dig a burrow, seal themselves in, and raise a small brood of workers on food produced in their own bodies (like say, milk in mammals or “cropmilk” in doves and some other birds.)

But lest you to think I only have eyes for ants, I feel indeed fortunate to have encountered a tarantula this week, of the same species as Ted recently posted and I didn’t even have to go to Oklahoma for it. This bedraggled individual was at the mouth of its completely flooded burrow in what is most often a very dry habitat — a dolomite glade. Stunned and muddy at the time, my guess is this creature, belonging to a resilient and ancient lineage, will dry off, clean up, and saunter away as soon as she warms up. 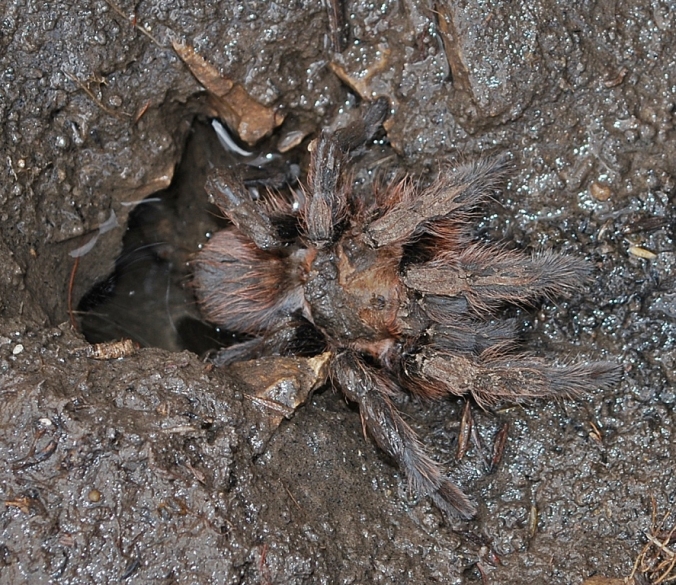 And speaking of emerging from flooded burrows, how about this handsome fellow, a male three-toed box turtle, his sex revealed by his bright orange and red markings, coming up for a breather? In truth, it was perhaps only just warm enough to make him need air, but not really enough so for him to be up and about, so he just sat there, nearly immobile, looking pretty, notwithstanding mud and leaves glued onto his shell. 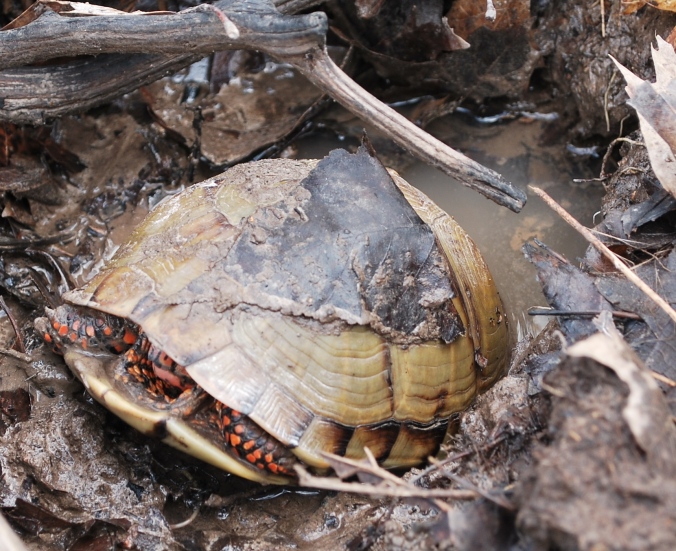 10 thoughts on “The Inexorable March of Spring!”