I returned home from a much-needed vacation late last night, and even though it was a family trip I have much to share from the past 10 days. However, I must remain coy about where I was for the time being so that I may present this little quiz:

I had planned to post this yesterday, but the best title I could come up with – “Monday Myrmecine Mystery” – was just too similar to a Monday tradition on another blog that we’ve all grown to love.  (Also, I just couldn’t get to it.)  No longer constrained by an M-themed title, I came up with this alternative¹ that I hope will make the 12-year old boy in each of us giggle aloud.

¹ Pismire (from pissemire) is an archaic name of Scandinavian origin for ant. Derived from pisse urine (referring to the smell of formic acid) + mire ant. 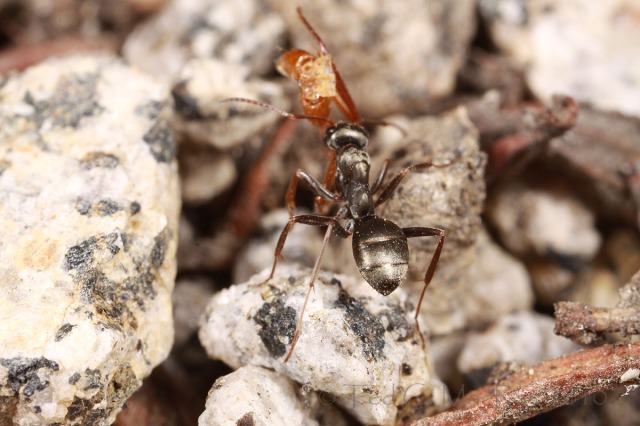 What am I doing?

I expect members of the Formicine Guild will jump all over this, so I should probably make this quiz about more than just the name of the ant (which I don’t know, so does that make this an illegal quiz?).  Maybe I should offer double points to non-myrmecologists for a proper ID (but then, I would need the consensus of the myrmecologists – perhaps a conflict of interest?).

Why do I do this?

I could also offer points for correctly guessing what the ant is carrying – which again I wasn’t able to figure out, so I guess points will have to be awarded for the most plausible explanation.  What I do know is the ant carried this carcass while meandering aimlessly over the same patch of ground – occasionally stopping very briefly to dig its jaws into it before resuming its wanderings.  I followed the ant for about 10 minutes, and it never left an area of about 1 square foot – no nest nearby that I could see, no direction to its travels, no apparent purpose to its labors.

This is where I live.

I most definitely know where I was, so firm points are on offer for correctly guessing the answer to that question – either on the basis of the ant ID or the above photograph of its habitat.  Yes, that is snow on the ground – lots of it!