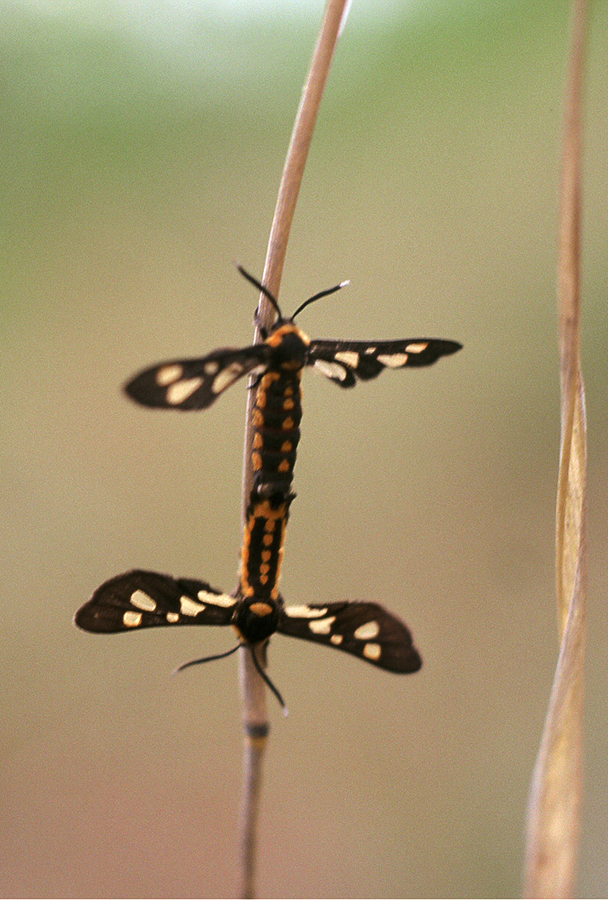 Another photo from the South Africa files, and one that continues the mimicry theme that has been featured in several recent posts. It’s not a great photograph – the focus is off – but the colors these moths sport are dazzling, and there is a nice symmetry to their tail-to-tail mating position.

Roy Goff, author of the website African Moths, tells me this species is the Simple Maiden (Amata simplex) in the family Arctiidae (whose ~2,000 species worldwide are increasingly considered a subfamily of the already enormous Noctuidae) [update 6/20/2012—Martin in a comment considers these moths to actually represent Trichaeta pterophorina in the same subfamily].  Its gestalt – greatly resembling a stinging wasp – brings to mind the so-called “wasp moths” of North America (subtribe Euchromiina); however, maidens belong to the exclusively Old World Syntomina.  Like the wasp moths, most maidens are exceptionally colorful and exhibit clearly aposematic patterns.  While these might seem to be textbook examples of Batesian mimicry, most species in this group are also protected by distasteful secondary plant compounds that they sequester through feeding, making them Mullerian rather than Batesian mimics.  These compounds are not only acquired by larvae from their food plants, but also by adult moths who imbibe them from fluid regurgitated through their proboscis onto dried parts of plants containing the compounds and into which they dissolve.

Their aposematism is not limited to strictly visual cues.  An Australian species, Amata annulata, is known to regularly emit ultrasonic clicks when flying, thought to be aposematic behavior to warn bats of its distastefulness in the same way that that its coloration warns daytime predators. Additional defensive characters that have been described for species in the group include frothing and extrusion of defensive processes. Clearly, maidens are leaders in the arms race among the insects!