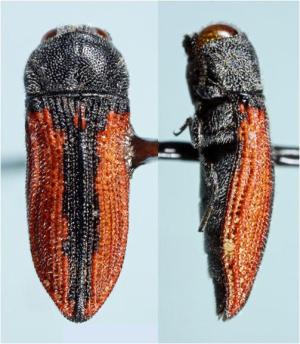 Earlier this year, I featured this small jewel beetle in the genus Acmaeodera (family Buprestidae).  It was collected a few years ago in southeastern Arizona by my hymenopterist friend Mike Arduser, who over the years has given me a great variety of buprestid and cerambycid beetles that he has encountered on flowers while collecting representatives of his chosen specialty – apoid bees (bee specialists are often great collectors of flower visiting insects across many taxa!).  This particular specimen is perhaps the most exciting of all of those, as it appears to represent an undescribed species.  Unfortunately, it is the only specimen known, and describing new species based on a single specimen in a genus such as Acmaeodera – diverse, variable, and with ill-defined species limits – is not advisable.  I have enlisted the help of a few insect collectors to try to find more specimens of this species to allow proper description; however, so far no additional specimens have turned up.  The summer monsoons have begun this season in southeast Arizona, thus the next few weeks will once again provide the opportunity to encounter this beetle.  I am hoping that this post, with precise locality data, information on the circumstances of its collection, and photographs of the beetle and its habitat, will prompt any entomologists reading this to scour the mountains of Arizona during the next month (or the accumulation of undetermined material in their collections) in the hopes of encountering additional specimens to allow formal description of this species.

Well, we found the site based on the GPS readings you gave me.  We could not find any of the Aloysia in that location, but there were some other leguminous plants with white flowers a-buzz with bees.  No beetles however.  The area has had a fire burn through it in fairly recent history – several years maybe?  It’s hard to tell, but that could have changed things a bit.  Anyway, we drove west on Ruby Rd a few tenths of a mile and did find a drainage full of Aloysia!  This was the only location along Ruby Rd where we found any growing.  Three of us checked it very carefully uphill and downhill from the road (rough scrambling).  There were lots of bees, flies and leps, but no beetles!

The following year, North American Acmaeodera guru Rick Westcott himself went to search for this species – also without success.  He wrote:

If you remain in touch with the collector of the latter, please ask him if he got it up on the pinyon-juniper zone, or were there just oaks and junipers?  If he was at 6000′, I am quite certain there had to be pinyon.  The trail (#100) starts on the Ruby Road at 4700′ and goes to the lookout that is at 6200′.  I decided not to go to the latter, but I was close.  I did not see any flowers that were suitable for Acmaeodera, let alone did I see an Aloysia bush.  Much of the area had been burnt, though some years ago.

I sent this information to Mike Arduser, who replied as follows:

It appears now that I  must have  misinterpreted the elevation on my topo map and carried that error onto the label, because though I walked up almost to the lookout I did not do any collecting up that high. My collecting (hand net and malaise traps) was done adjacent to Ruby Rd., then upslope approximately 100 meters or so, all of it east of the #100 trailhead (which is where I parked). The only woody plants in the immediate vicinity I noted were Aloysia (in narrow rocky drainages) and a legume (forget the genus at the moment). However, I think there were a few oaks scattered around (I believe there was one where I parked). There was no evidence of fire at the time I was there.

Mike also sent me the photo shown here taken near the collection site (if nothing else, the spectacular scenery makes a visit to this place seem like a good idea), noting:

Attached is a photo from the Atacosa Mtns. Area where the new buprestid was found – the photo was taken about 100ft. elev.  above the collection site and about a ¼ mile to the west.

I’ve included a Google Map at left that shows the location of the Atascosa Lookout (#100) Trailhead.  It’s not the best overhead photo, but it does give an idea of the landscape relief and rather precisely pinpoints its location via GPS coordinates in the lower lefthand corner.  If the beetle truly does occur at lower elevations (~4,700′), then it is probably not terribly specific about this particular locality.  Perhaps it is a Mexican species that only occasionally makes it into the U.S. depending on the season. The repeated comments about apparent fire in the area by Paul and Rick suggest potential vegetational differences in the area from the time the beetle was collected compared to their subsequent visits. Although the single specimen was collected on Aloysia flowers, it is also possible that the species does not actually show a particular preference for this plant – although it does seem likely that it visits flowers of some type.  The only way to answer these questions is by finding more specimens!

14 thoughts on “Call for paratypes!”