A few weeks ago, while waiting to begin my nocturnal hunt for the Great Plains giant tiger beetle (Amblycheila cylindriformis) in northwestern Oklahoma, I spent the daytime atop one of the red flat-topped mesas that meander through the area in nearby Gloss Mountain State Park.  Although my trip was all about seeing this giant of a tiger beetle in the wild for the first time (I could hardly wait for dusk to begin my search), I found enough splendid insects of other types atop the mesa to occupy my interest until that time.  One of these was the still-robust population of the Swift Tiger Beetle (Cylindera celeripes) that I discovered last summer and delighted in photographing yet again, while another was North America’s largest robber fly – Microstylum morosum!  I had just finished photographing one of the tiger beetles near the edge of the mesa when I turned and saw one of these impressively large flies sitting calmly on the ground nearby. 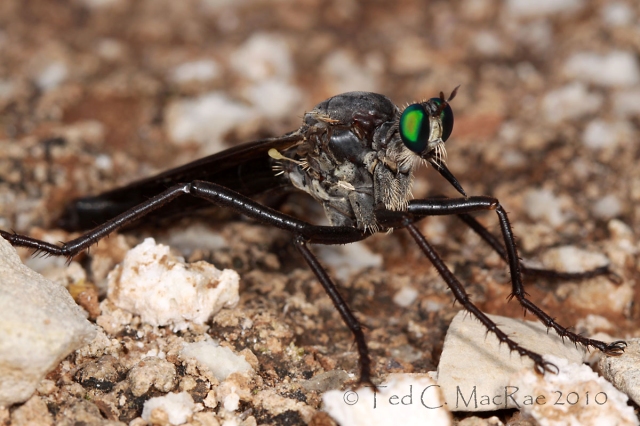 I first encountered this species last year in southwestern Missouri (a new state record!), so there was no question about its identity.  I also remembered how skittish they were and how difficult it was to get even the two mediocre photographs that I included in the resultant post.  Expecting the same, I kept my eye on the ground-sitter while preparing the camera and approached it with extreme caution.  To my surprise, it showed no sign of being alarmed or wanting to take flight.  I crouched down low and marveled at its monstrous impressiveness as I took frame after ever closer frame – eventually zeroing in on the head and its stunningly magnificent emerald-green eyes. 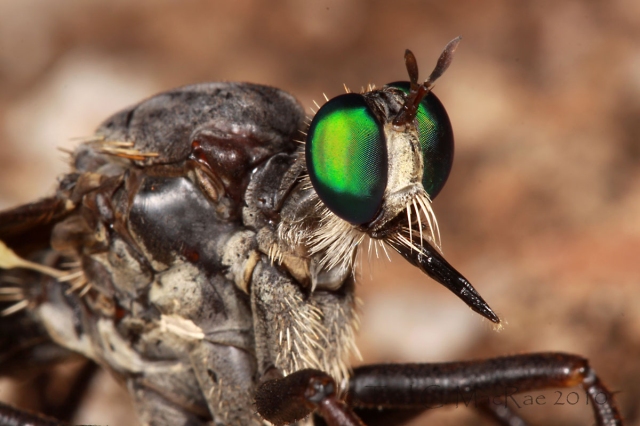 Satisfied that somewhere in the dozen and a half frames that I shot was at least one or two winners, I sat up and probed towards it with my finger to see how quickly it took flight.  It just sat there tenaciously until my touch caused it to finally take wing.  Winds were gusty atop the mesa, which may have accounted for its cooperativeness.  Standing up, I noted a few scattered eastern redcedars (Juniperus virginiana) in the mixed-grass prairie at the highest point of the mesa.  I recalled that robber flies are fond of “hilltopping” – a mating strategy whereby males fly to the highest point in their immediate landscape to defend a small territory or perch that provides a good vantage for spotting females and competing males (see Hilltopping by Eric Eaton at Bug Eric for a good discussion about this) – and my own experience with this species in Missouri and the way it tended to perch in the trees scattered across the upper part of the rocky, dolomite glade where I found them.  I wandered up to the redcedars, and as soon as I came close enough to one of them I saw another individual take flight – looking like some super-sized mosquito with it’s long legs spread wide as it clumsily flew to another tree.  As it turned out, I saw a number of individuals and mating pairs perching and flying among the trees on top of the mesa, each more spectacular than the previous.

Until recently, Microstylum morosum was considered a Texas-endemic.  However, Beckemeyer and Carlton (2000) documented this species to be much more broadly distributed in the southern Great Plains (from Texas up into Oklahoma and Kansas and west into New Mexico, Arizona, and Colorado), and Warriner (2004) recorded it shortly afterwards in Arkansas.  Although the species apparently occurs throughout Oklahoma (Beckemeyer and Carlton recorded from 13 counties across the state), my observation of it in Major County does seem to represent a new county record for the species.  There is another U.S. species in the genus, M. galactodes, and it has also been recorded from Oklahoma (the closest record is in nearby Woodward County).  However, it is easily distinguished by its generally smaller size, milky white wing membranes, reddish-brown body, and head and thoracic dorsum evenly covered with whitish pruinescence, while M. morosum has the wings and body black to brown and thoracic pruinescence restricted to the lateral margins (Beckemeyer and Carlton 2000).  I’m not sure I would have recognized that species for what it was had I seen it, but if it is anywhere near as impressive as M. morosum then I hope I have the fortune to find it someday as well.