Naturalists have long been aware of the greater tendency for plants than for animals to create viable interspecies hybrids. This is attributable not only (as some might expect) to a higher likelihood of passive plants whose mating is mediated by pollen-hungry insects, or the wind, to hybridize more often, but rather to a greater ability of plants, with the simpler design of their anatomies, successfully to build a functioning organism with a Gemisch of genes from parents of different species. Such hybrids occur naturally, and are often reported in regional floras. Further, the advent of modern techniques for characterizing DNA has revealed that hybridizations of yore have given rise to numerous species, and higher lineages, in plants, in fungi, and to a lesser extent in animals.

My recent wanderings in quest of fall flora photos at Shaw Nature Reserve really brought this phenomenon of admixture of species to mind as I was examining populations of the three Gentiana species that live at the reserve. All three are fairly recent introductions at SNR, added to the flora in several locations in our prairie and wetland habitat reconstruction program. Hybridization among these gentian populations was first brought home in my observation over the last three years of increasing numbers of purplish and bluish and outright blue individuals in a population that was originally pure white gentian – Gentiana alba. This population was sowed in the mid-1990s as part of a mesic prairie reconstruction in the watershed of our wetland complex.

Gentiana alba, G. andrewsii and their lavender tinted hybrid growing side by side at Shaw Nature Reserve. 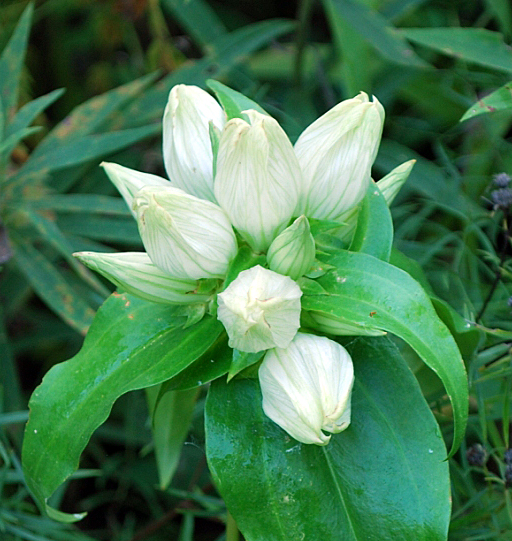 A few years later, 50 or so meters distant, separated by a dense row of trees and shrubs, and in a much wetter habitat in which water pools after every rain and seeps subsurficially much of the year, blue bottle gentian – G. andrewsii — was sowed into a wet prairie / sedge meadow reconstruction.

At first the two populations grew independently and remained separate, but what I surmise was a combination of water borne seed transport (along the shore of a pond whose edge both populations are near), and bumblebee borne pollen transport, conspired to bring gametes of the two species together, creating what population geneticists call a hybrid swarm, and what taxonomists call a — well, I can’t write it in polite company such as my readers.

Observe in the sequence of images above how a bumblebee gyne (a potential queen of one of next year’s annual bumblebee colonies) pries open a bottle gentian flower and dives in for a long drink of nectar at the base of the large vessel. Apparently the nectar is copious, because bumblebees may remain in a single gentian flower for up to a minute. 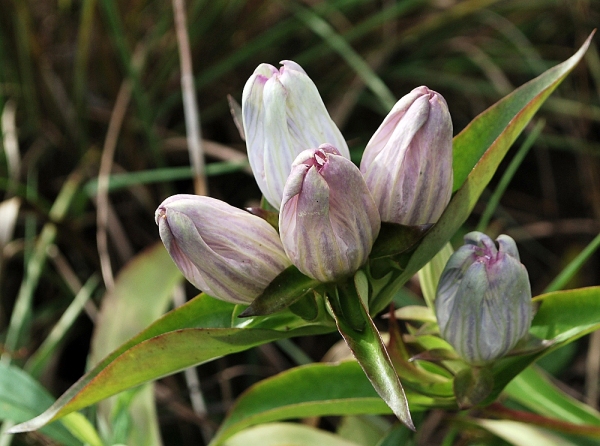 The result of pollen transport among pale and blue bottle gentians, a hybrid of intermediate characteristics.

While there are other populations of both species on the reserve (one hopes, out of bumblebee range from each other) that may retain their genetic integrity, the rampantness of the admixture at this site does give me pause.

And it gets worse! — On drier ground up the slope, among a dense planting dominated by prairie dropseed and little bluestem grasses,  a third gentian known as downy or prairie gentian – Gentiana puberulenta – was established from a seed mix sowed 10 years ago to convert the watershed of the reserve’s wetlands to prairie vegetation. 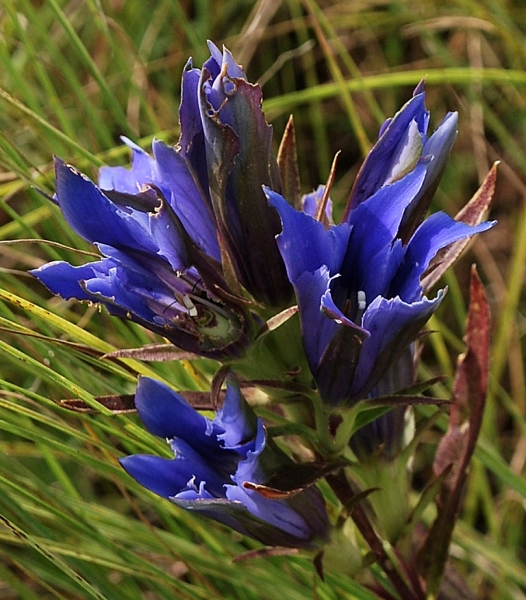 Unlike the two previously mentioned species and their hybrids, the downy gentian's petals open wide at anthesis, admitting entry to small bees and even to spindly-legged potential pollinators such as syrphid flies.

And now those perverse bumblebees have gone and defied the laws of speciesness and created what appear to be hybrids of this third gentian species with the other two. Honestly, I don’t know whether to feel that I have done some sort of wrong by creating the situation that allowed this to happen … or simply to be intrigued by this unforeseen outcome of my work, and to wonder what will come of it after I’m gone?

My professional training is in entomology, with strong areas of secondary study in botany and several foreign languages. I have an inordinate fondness for ants, and conduct research in them in my spare time from "real" life and from my job as naturalist/native habitats manager at a nature reserve in eastern Missouri.
View all posts by jtrager →
This entry was posted in Apidae, Gentianaceae, Hymenoptera. Bookmark the permalink.