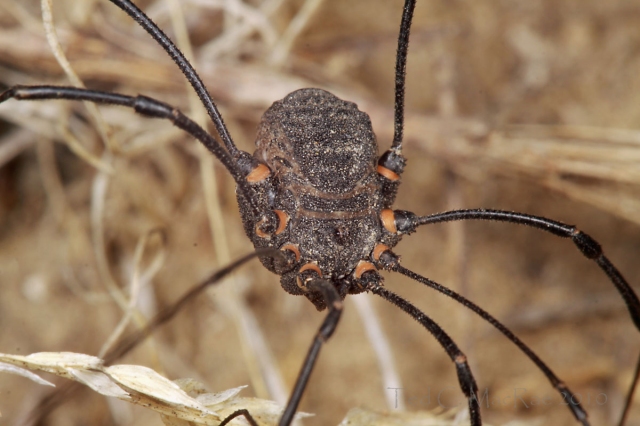 While searching through shortgrass prairie atop the Pine Ridge in northwestern Nebraska in hopes of finding Cicindela nebraskana (prairie long-lipped tiger beetle), this harvestman caught my eye.  Harvestmen are, of course, arachnids related to spiders, but they lack fangs and poison or silk glands and are placed the separate order Opiliones (Phalangida when I was in school).  Admittedly, I haven’t paid much attention to harvestmen before now, but this one seemed different from any I’d seen before – nearly black with relatively short legs and distinctive orange intersegmental articular membranes at the base of the legs.  Harvestmen are known to employ chemical defenses through special repugnatorial glands that produce phenols, quinones, ketones, and/or alcohols, and this individual seemed to display a clear example of aposematic coloration to warn any potential predators of its distastefulness. 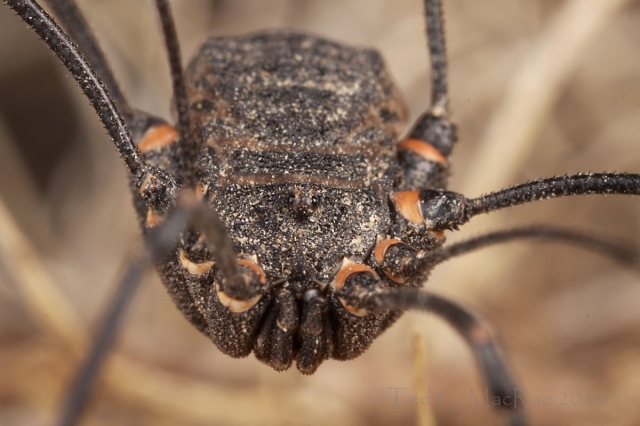 Although beetles are my focus, I normally try to do my own identifications in other groups as well.  However, some rather persistent searching through the extensive harvestman holdings at BugGuide failed to turn up a good match.  In gestalt it seemed to belong to the family Sclerosomatidae, but even that was just guessing on my part.  So, I did what I’ve done only a few times before and posted the photos to BugGuide’s ID Request.  A day and a half later I had my answer – Trachyrhinus favosus.  BugGuide Contributing Editor V. Belov had sent the photos to harvestman expert Marshal Hedin, who had this to say in response:

Cokendolpher describes males as ‘body ranging from solid black…’ with bases of femora ‘yellow-brown’. The species is also known from western Nebraska. Cool.

I was pleased to learn that these photographs represented a new species for BugGuide and no longer felt bad about not being able to find a good match.  Further, my leanings toward the family Sclerosomatidae had been confirmed.  According the Cokendolpher (1981), T. favosus ranges in a narrow band from North Dakota south to north-central Texas and is active only during fall.  I had intended to try to get an even closer photograph, but after taking the second photograph above I accidentally disturbed the critter and then watched in amazement as it began bouncing up and down vigorously.  This apparently is a defensive behavior that functions to blur the body form.  I watched it bounce and became even more amazed as it began calmly walking away while continuing its vigorous bouncing – quite a spectacle!