It’s been four months now since I went to the Glass Mountains of northwestern Oklahoma on a hunch to look for Amblycheila cylindriformis (Great Plains giant tiger beetle).  The five adults that I brought back from that night are still alive in a terrarium of native soil, but to this point they have refused to lay eggs.  Despite feeding them regularly with fat Maduca larvae, there is obviously still something they need that I am not providing.  I’ve suspected that perhaps the terrarium that I have them in is too small, and I’ve also noted in the literature that larval burrows are often found clustered near the entrance of mammal burrows.  With this in mind, I combined the native soil from three separate terraria into one larger, deeper terrarium, packed the soil lightly, and used a spoon to create an artificial mammal burrow entrance.  Not long after placing the adults in their new home they began digging at the back of the burrow, eventually creating two separate tunnels leading in opposite directions (and fortunately against the container walls so that I can see inside the tunnels).  I was optimistic at first that finally I had given them what they wanted, but since digging the burrows they’ve just sat in them.  Perhaps they “know” that winter is coming and are just looking to hole up for now, so I suppose I’ll go ahead and place the terrarium in the 10°C incubator with the rest of my larval and adult rearing containers and wait until next spring to see what happens.

In the meantime, I thought I would share these recent photographs of one of them.  I had been wanting to take photographs of this species in a white box, which I have used with a few other species to generate some rather striking photographs (e.g., Gromphadorina portentosa, Buprestis rufipes, Scolopendron heros, Eleodes suturalis). The photographs in this post might look like they were taken in a white box, however, they were not.  I’ve been spending a lot of time lately trying to come up with a diffuser setup that is convenient for field photographs of wild insects in their native habitats.  Kurt’s do-it-yourself concave diffuser and Alex’s tracing paper diffuser work great with the Canon MT-24EX Macro Twin Lite Flash and the Canon MP-E 65mm f/2.8 1-5X Macro Lens, but as I mentioned in a previous post they do not work so well with the Canon EF 100mm f/2.8 Macro USM Lens and its longer working distance… or so I thought!  I’ve come up with a modified version of the concave diffuser that seems to be what I am looking for – it is easy to use, adds virtually no weight to the camera, is completely portable for field use, can be used with both the 65mm and 100mm macro lenses, and – best of all – costs virtually nothing.  The photographs in this post were taken with the first prototype, and now that the basic design and general dimensions seem to work I’ll try to make a more durable version. It’s simply a larger version of the concave diffuser – I found some very thick polypropylene foam that is sturdy enough to hold its shape but flexible enough to curl back and over the top of the flash heads, where the corners are held in place by Velcro. Essentially it forms a large “soft box” type diffuser in front of both flash heads. I cut the bottom inch off of a a 500-mL polypropylene beaker, then cut that in half and cut out all but a quarter inch of the bottom to form a sturdy but transluscent frame to hold the polypropylene foam against the flash head bracket on the front of the lens. Right now the foam is held in place by tape, but hot glue should do a better job, and the diffuser bracket is attached to the flash head bracket with Velcro. The whole rig comes off in a flash and lays mostly flat in the camera bag. 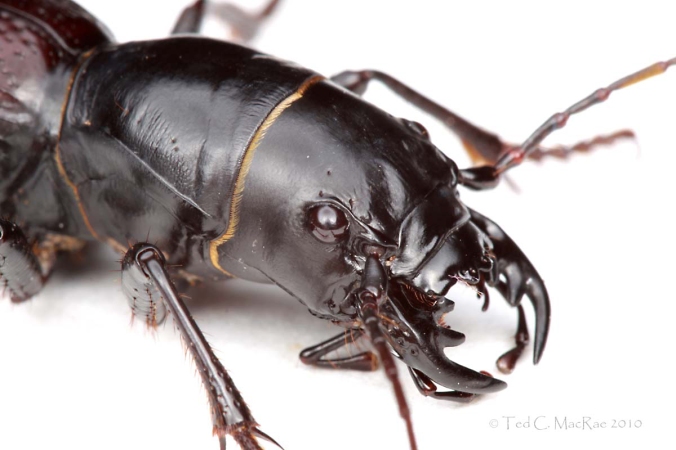 If this diffuser proves successful, it will eliminate the need for the different flash head extender brackets that I was considering.  I really didn’t want to go that route because even the cheapest models are rather costly, and all of them add bulk to the camera and create problems for those who need to switch lenses frequently (such as I do).  Of course, the real test is – does it achieve the desired result?  I’m quite happy with these initial photographs – the lighting is quite even due to the large “apparent” size of the light source, and the annoying double specular highlights that are the hallmark of the MT-24EX are much less apparent (though still slightly discernible).  The closest shots are at 1:1, while those of the entire beetle are between 1:1.5 and 1:2.  They are among the largest beetle species that I have photographed, so the range of magnifications used here pretty much covers the entire range that I typically use with this lens.  Wildflowers often require smaller mags and longer working distances, so it remains to be seen whether this diffuser/lens combination will be useful for them as well. 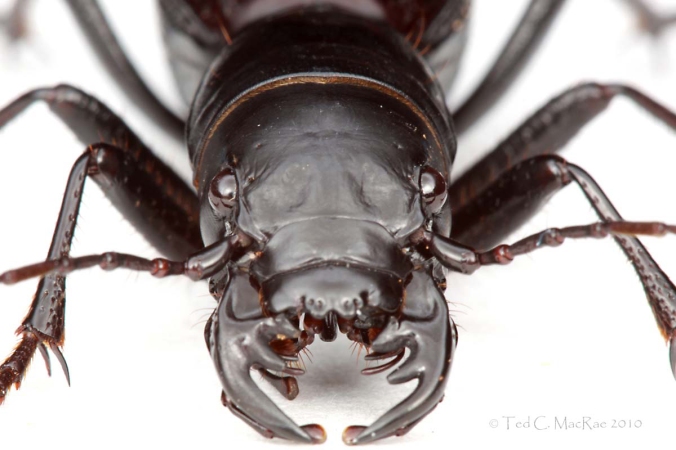 All of the photographs in this post were taken with the 100mm macro lens (ISO100, 1/250 sec, F16) and direct MT-24EX macro twin flash using this new diffuser.  The beetle was placed on white filter paper and covered with a clear glass bowl until it settled against the side of it.  Once the beetle was quiet, I gently lifted the bowl and used micro-forceps to gently tug its legs into more appealing positions – surprisingly this did not cause it to become alarmed and try to flee (as long as I didn’t accidentally brush against one of its antennae!).  For the last photograph, I placed the beetle back in its terrarium and used the same techniques to get the beetle in a good position. 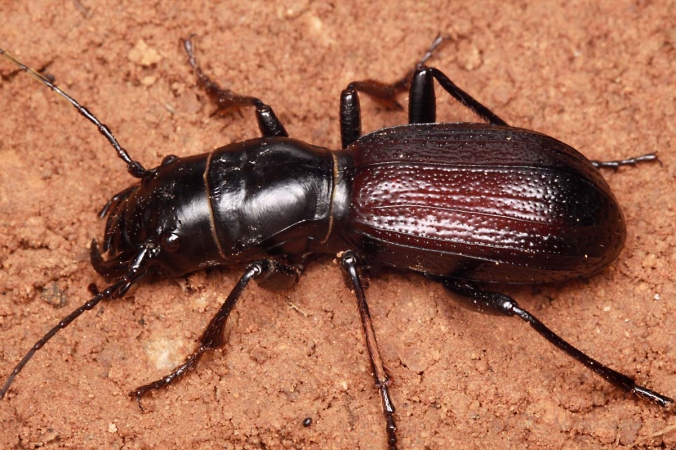