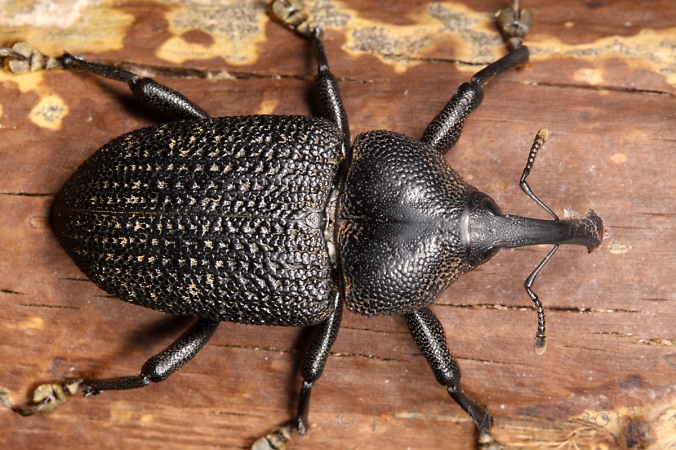 The second night at the hotel on the outskirts of Campinas (São Paulo, Brazil), I found this enormous weevil laying on the ground underneath some windows.  It was dead but completely relaxed and in perfect shape.  I wondered if it had been attracted to lights in the window the previous evening and flown there as its “last hurrah.”  This beast of a weevil – measuring a good 30mm from the tip of the snout to the apex of the elytra – immediately brought to my mind ﻿giant palm weevils of the genus Rhynchophorus (Coleoptera: Curculionidae).  I looked around and saw palm trees everywhere, so I figured that must be what it was.  I picked up one of the dead fronds from under a nearby palm tree and placed the weevil on the stem for a few photographs.  Given it’s freshness, it was quite easy to place in a lifelike pose, and I placed the stick in various positions to get a few different backgrounds.  As I was shooting, I noticed another, smaller, weevil on the ground near where I had found the first one – also dead and fresh.  Considering that Rhynchophorus often reaches pest status on palms, this further confirmed the ID in my mind.

Once back in the hotel room I smugly entered “giant palm weevil” into Google to bring up some images and confirm my ID (and also make sure my photos were at least on par with published images).  When the images came up, I saw immediately that my weevil was not a giant palm weevil at all.  While the South American species (R. palmarum) is black, the pronotum and elytra are much smoother and distinctly striate.  I don’t know if this weevil is a member of the same subfamily (Rhychophorinae) as the giant palm weevils, but it certainly not a member of that genus.  Still, considering its large size and distinctive appearance, I remained confident that an ID would come quickly.  Sadly, this has not proven to be the case – no search term I’ve tried involving the term “giant black weevil Brazil” or its many variations brings up anything remotely similar.  So, after spending much more time trying to identify this beetle than I should have, I leave it in the hands of my readers in the hopes that one of you will recognize it and provide a name.  Only when we have a name will it be possible to know something more about how this beetle lives (and if my placing it on a dead palm frond was a truly artificial setup). 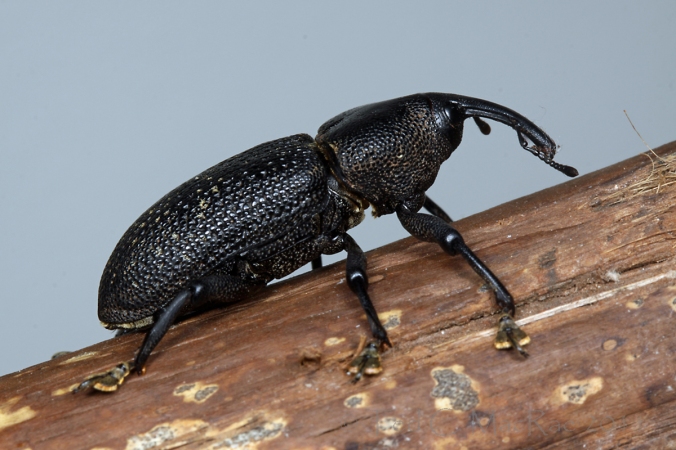 Update 01/24/11: Thanks to Henry Hespenheide (via Facebook) and Art Evans, who clued me in to the genus Homalinotus (subfamily Cholinae).  I found a key to the 21 known species of this exclusively Neotropical genus (Vaurie 1973) and consider this individual to represent H. coriaceus – broca do cacho do coqueiro (black coconut bunch weevil).  This species breeds in the stems of old leaves of several native palms; however, it has adapted to the introduced coconut palm and apparently become a limiting factor in the commercial production of coconuts.  Thus, I can breathe easy now knowing that my photographs of this individual on the stem of a dead palm frond represent an entirely natural setting.

Vaurie, P.  1973.  The weevil genera Homalinotus and Ozopherus of the Neotropical Cholinae (Coleoptera, Curculionidae).  Bulletin of the American Museum of Natural History 152(1):1–49.