As I strolled the hotel grounds here in Campinas after work one day last week, I came upon a tree with several epiphytic orchids and a large staghorn fern (Platycerium sp.) mounted to its trunk.  On the tips of several of the fern’s leaves sat these peculiar looking flies – shining dark blue-black in color with a prominent red head.  I’m just guessing that they were some sort of blow fly (family Calliphoridae), although something about the look doesn’t seem quite right for the family (maybe because I’ve never seen Brazilian calliphorids before).  I found it interesting that they all oriented themselves head downward at the tip of the leaf on which they were sitting.  When I get intrigued by something, I want to photograph it, but in this case it was easier said than done.  They were small enough to require the 65mm lens, which means getting quite close, and every time I approached one it would fly away.  There were enough of them, however, that when one flew away I would just try another, and each fly would eventually return to the same leaf on which it had previously been sitting.  I spent some minutes scaring away fly after fly before I finally figured out the approach.  That, however, was only half the battle! 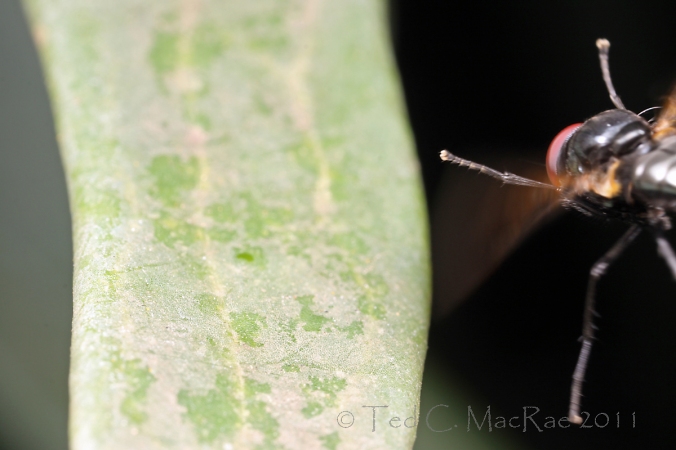 When I finally started trying to take some shots, the pre-flash on the ETTL flash setting would scare the fly before I could complete the shutter snap, and I was getting only an empty frame where the fly had been sitting.  I thought about switching to manual flash but decided to keep working the fly and just see if I could get it accustomed to the flash.  The first photo in the series posted here is the first one in which I actually got part of the fly in the frame (I think he did a quick loop out and was actually returning to his spot when the shutter snapped).

I got closer in this one – the fly was just starting to take off as the shutter snapped (too bad I didn’t have better focus, or this could’ve been an interesting view).

Finally, I got the fly sitting still at the tip of the leaf.  This is when I started to get picky – I wasn’t too satisfied with the composition in this photo, and since he seemed to have become accustomed to the flash, I decided to take a few more shots to try to make sure I get one with good composition and focus.

Better composition this time, but the focus is still a bit off.  Unfortunately, this was my last shot at this guy, as he took off right afterward.  The thought taking the time to work another fly and get him accustomed first to me and then the flash didn’t appeal to me by this point – I was in Brazil, and there are so many other insects to photograph.  I decided good enough was good enough and continued my searches…