One of the insects I saw abundantly during my visit last month to La Reserva Ecológica Costanera Sur (Buenos Aires, Argentina) was this species of black ant that looks well enough like one of our typical North American species. They were quite common, seen on virtually every plant that I examined closely. I made a few feeble attempts at photographs in the early part of the day, but desire faded quickly in the face of their frenetic behavior and occurrence in exclusively tough-to-photograph situations.  I mean, they’re just ants!¹ Around midday I noticed that many of the flower heads of the pampas grass clumps in the area had at least one ant perched in this interesting head-down, abdomen-curled forward position – I tried to capture the situation, but even this best of the bunch turned out, well… boring!

Finally, late in the day, I saw one crawling on the trunk of a recently fire-killed tree that I was inspecting in (futile) hopes of encountering adult jewel beetles or longhorned beetles that would have been attracted to this newly available resource.  This was the easy-to-photograph situation I was waiting for, and the dark color of the charred bark brought out nicely the hairs on the body despite both ant and bark being nearly the same color. 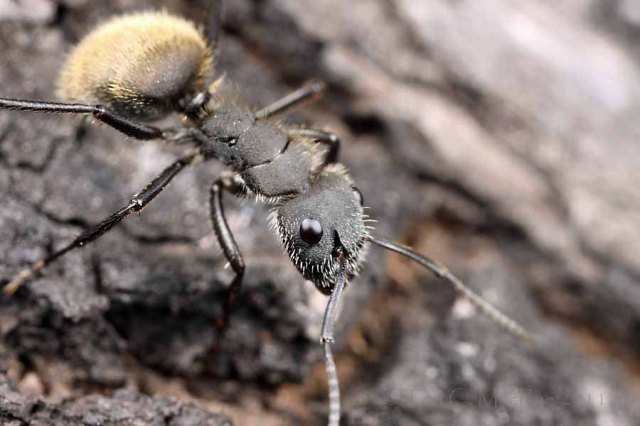 I’m a beetle guy, and normally I would be happy to just call this Formica nigra and move on.  Whatever possessed me to even begin the process of trying to identify this particular ant is beyond me (maybe I’ve actually learned something after a couple of years of reading Myrmecos!).  It had the look of our North American Camponotus, so I entered “Camponotus Argentina” into Google Images and found this photo of Camponotus mus, taken by our friend Alex in nearby Santa Fe, Argentina, near the top of the very first page.  Now, I realize that closely (and even distantly) related species can look quite similar (especially to the untrained eye), but everything about this ant looks right – the bulbous-abdomen, the shape of the thorax, the matt black color, and the velvety yellowish pilosity of the abdomen. A little searching on the name reveals this species to be quite abundant in Argentina, where it goes by the common names “hormiga de madera” (wood ant) and, not surprisingly, “hormiga carpintera” (carpenter ant). Alex? James? Did I get it right?

Ted C. MacRae is a research entomologist by vocation and beetle taxonomist by avocation. Areas of expertise in the latter include worldwide jewel beetles (Buprestidae) and North American longhorned beetles (Cerambycidae). More recent work has focused on North American tiger beetles (Cicindelidae) and their distribution, ecology, and conservation.
View all posts by Ted C. MacRae →
This entry was posted in Formicidae, Hymenoptera and tagged ants, Argentina, entomology, insects, nature, science. Bookmark the permalink.