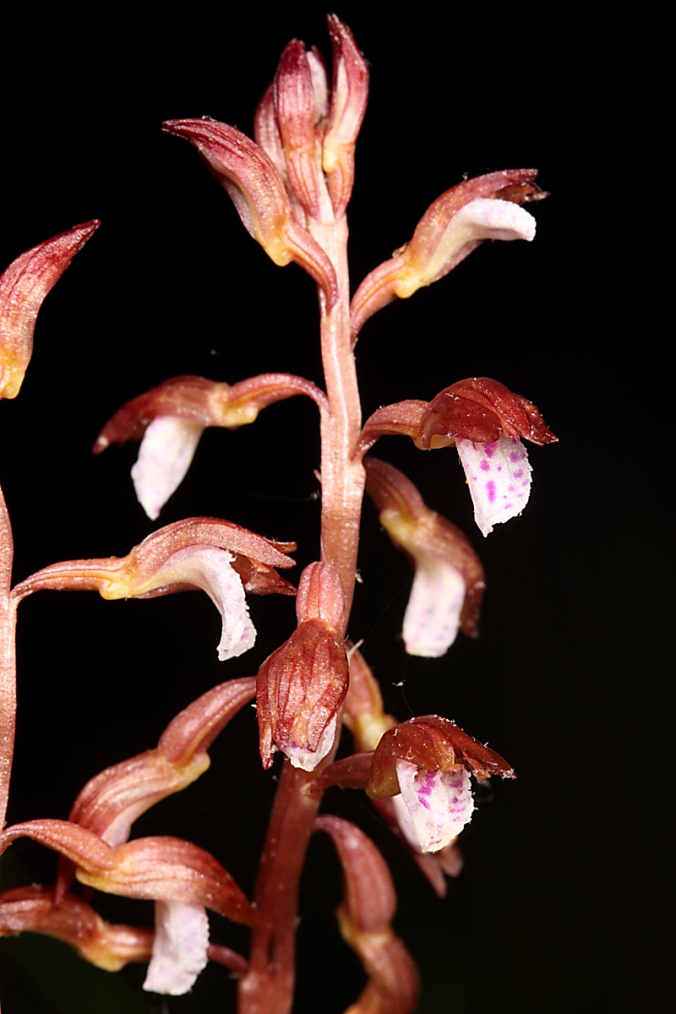 As flowers go, I have a passion for orchids.  Despite comprising perhaps the largest family of flowering plants on earth, most people think of orchids as rare, epiphytic plants restricted to the lush, hyper-diverse, tropical rain forests of South America and southeast Asia.  In reality, terrestrial orchids abound in the temperate regions of the Northern Hemisphere, with more than 200 species occurring in the United States and Canada.  Some, such as the lady slippers (genus Cypripedium),  have blossoms as magnificent as their tropical counterparts, while others are less conspicuous and easy to overlook; however, all share the hallmark that unites the family—a modified petal forming a conspicuous lower lip¹

¹ Interestingly, the lip is actually derived from the uppermost petal, but in most species the flower twists during development so that the lip is oriented at the bottom.

Missouri is home to 34 species of orchids (one introduced, and another discovered in Missouri for the first time just a couple years ago).  None of them are truly common like Rudbeckia or Coreopsis, although some are far more common than is realized.  I’ve featured a few of these previously, including Spiranthes magnicamporum (Great Plains Ladies’-tresses), Platanthera lacera (green fringed orchid), Aplectrum hymenale (Adam and Eve orchid), and Goodyera pubescens (rattlesnake plantain orchid).  I’ve traveled to the far corners of the state to see them, but for today’s featured species—Corallorhiza wisteriana (spring coralroot)—I had to travel no further than my front yard. 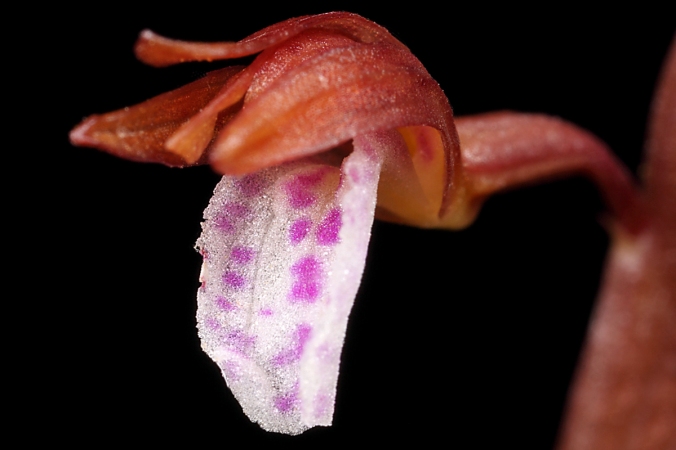 I’m sure my neighbors hate my front yard. I don’t use fertilizers or herbicides, and I’m unconcerned about the moss that grows amongst the thin stands of mixed grasses under the tall native oaks that shade much of the yard. My neighbor down the street especially probably shakes his head as he walks his dog past my yard every day, frustrated that I don’t share his passion for the lush, thick, über-green bluegrass monoculture that he has achieved (and must pay somebody to cut at least once a week). Spring must be especially frustrating for him, as I don’t even cut the grass until late May, giving the lawn an especially ragged, unkempt appearance. However, whatever my yard lacks in graminaceous greatness, it more than makes up for in its diversity of woodland natives—spring beauty, toothwort, trout lily, violets, coral bells… and spring coralroot. I have several colonies growing at different spots in the yard, all marked with surveyor’s flags to prevent accidental trampling until their bloom period ends and I can (begrudgingly) begin mowing the grass (no more than once a month, if I can get away with it). I’ve enjoyed these coralroot colonies every spring since I’ve lived here, but this spring was the first that I took the opportunity to photograph their blooms. 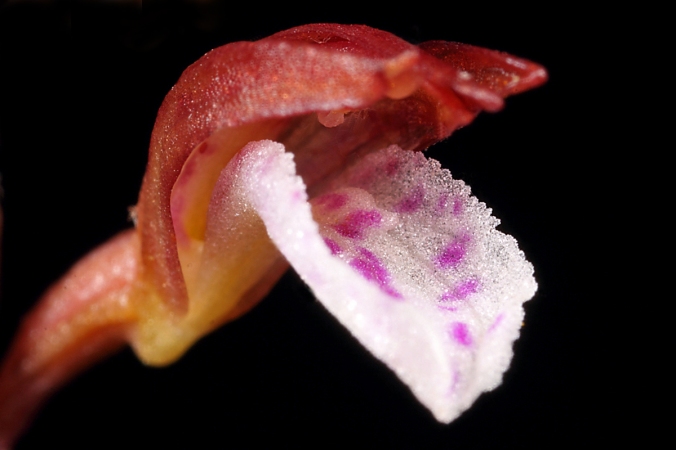 Of the three Corallorhiza species that can be found in Missouri, C. wisteriana is the most common, occurring in rich or rocky acidic soils of low wooded valleys, ravine bottoms, along streams and on ridges and slopes of open woods (Summers 1981).  My yard qualifies as the latter, occurring on a limestone ridge in mesic upland forest made only slightly more open by the late 1980s construction of the neighborhood and its minimal disturbance limited to the roads, driveways, home footprints and a small amount of associated lawn.  It is distinguished in Missouri from C. odontorhiza (Autumn coralroot) by its spring flowering period and larger flowers with notched or lobed lip, and from the rare C. trifida (known from only a few Missouri counties) by the purple or brownish stems and spotted lip. 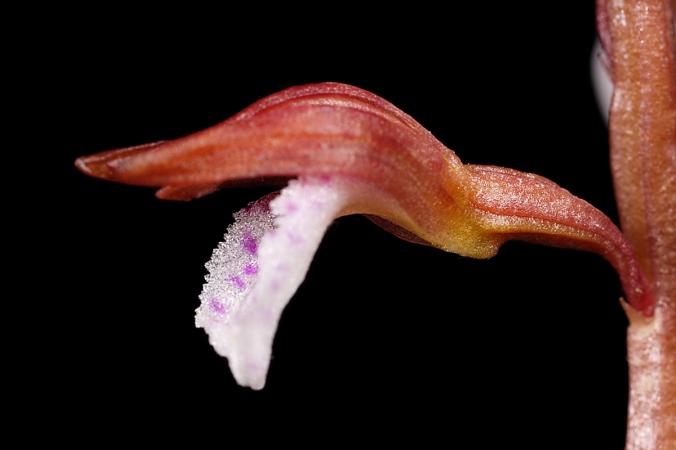 As suggested by the unusual coloration, Corallorhiza species are largely (though not completely) lacking in chlorophyll, and as a result are mostly unable to photosynthesize their own food. Instead, the bulbous rhizomes remain hidden within the soil for much of the year, forming symbiotic relationships with soil fungi and flowering only when conditions are favorable (Luer 1975). The past several springs have been wet here, and accordingly I’ve been rewarded with the wonderful sight of these exquisite tiny blossoms. 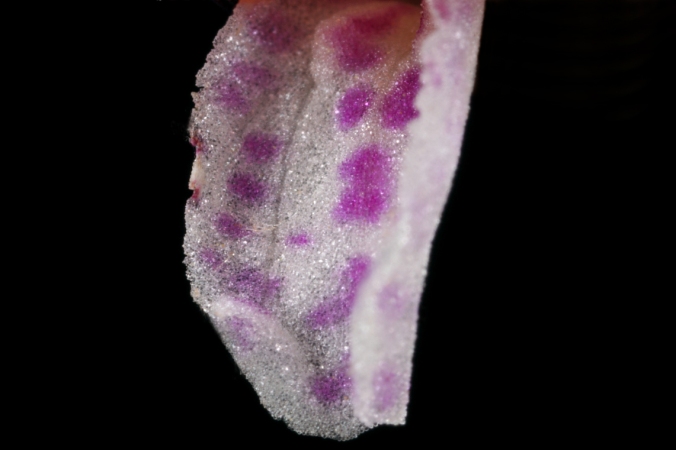 I can’t say that I’m entirely happy with these photographs, as I found it difficult to get the entire blossom in focus—when the petals were in focus the lip was not, and vice versa, even in straight lateral profile.  Nevertheless, they still show the delicate structure of the lip, with its scalloped edge and crystalline-appearing surface.  The blooms are fading now—soon there will be no above-ground evidence of their existence, and my neighbor and wife will likely gang up on me to finally power up the lawn mower.