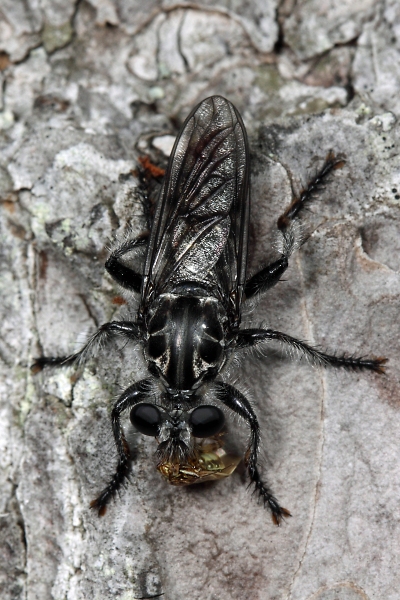 First, about the name. T.G.I.Flyday is my contribution to a collusional triad between dipterist Morgan Jackson, myrmecologist Alex Wild, and myself (uhm, beetles).  Although Alex blogs primarily about ants, he has long featured a “Friday Beetle Blogging” series.  I’ve also occasionally stepped on their toes with an ant or fly post, so Morgan and I thought it would be fun to complete the Friday switcheroo with a post about ants on his blog and one about flies on mine. Get it?… Oh well, it made me chuckle when we thought it up.  Anyway, here is my first T.G.I.Flyday contribution.

Among the flies (order Diptera), it is hard to pick anything but robber flies (family Asilidae) as the most charismatic group.  Several subfamilies of robber flies have candidates that vie for the most impressive species, mostly due to their enormous size combined with striking green eyes (e.g., Microstylum morosum, Diogmites neoternatus) or vivid, aposematic / mimetic coloration (e.g., Archilestris magnificus, Eccritosia zamon, Wyliea mydas).  However, my favorite subfamily is the Laphriinae—not because of the amazing bumble bee-like appearance of the nominate genus, but rather the larval food of all species in the subfamily; wood-boring beetle larvae.  Over the years, I have put up hundreds of batches of dead wood for rearing wood-boring beetles in the families Buprestidae and Cerambycidae, and not uncommonly do I find in one of the emergence containers—especially those containing dead pine—an adult of one of these impressive flies. Oftentimes their characteristic pupal cases will be found protruding from the emergence hole, in which case I pin it underneath the fly (just in case some ambitious dipterist examines my collection after I’m gone and finds that the pupal case of xx species is not yet described).  I’ve by now accumulated a rather decent little robber fly collection (especially considering that I’m really a coleopterist), graciously identified for the most part by world robber fly expert Dr. Eric Fisher (California Department of Food and Agriculture).

Last weekend I made the second in a series of trips I’ll be taking to the White River Hills region of north-central Arkansas in an effort to confirm the occurrence there of Cylindera celeripes (swift tiger beetle).  My efforts are focused on the area around Calico Rock, a marvelous system of acidic sandstone barrens interspersed amongst shortleaf pine and oak forests.  The occasional dead pines found in such areas are highly attractive to a variety of pine-associated buprestids and cerambycids (my first loves), and whenever I see a standing dead tree I make a beeline straight for it (the tiger beetles can wait). 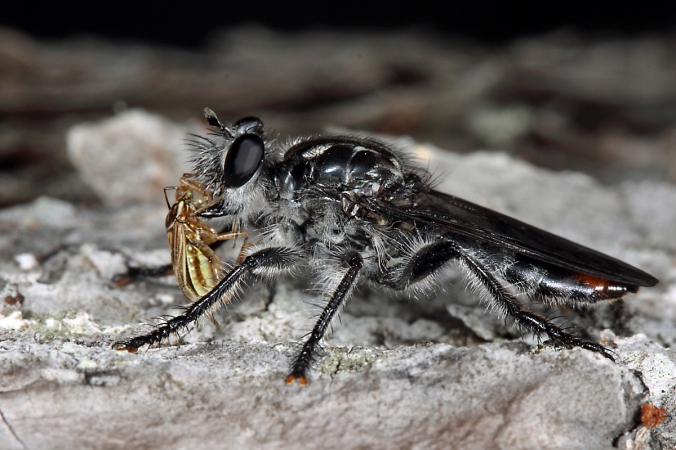 This individual was sitting on the trunk of a dead shortleaf pine with a mirid bug for prey.

On this day, sitting on the trunk of the first dead pine that I approached was not a buprestid or cerambycid, but rather this laphriine robber fly.  Based on the reddish posteriodorsal markings of the abdomen and general gestalt, I take this to be Andrenosoma fulvicaudum, a widespread though never very abundant species that occurs across most of North America.  According to Bromley (1934), the species frequents dry, sandy locations where it rests on logs, stumps, or tree trunks exposed to the bright sunlight and is commonly observed preying on small hymenopterans.  These observations are quite consistent with mine, except this one was feeding on a true bug in the family Miridae (perhaps distracting it just enough to allow me these photographs).  Cannings (1998) notes that A. fulvicaudum is attracted to recently burned forests, which will provide a fresh supply of wood-boring beetle larvae on which its larvae can prey.  This is the only species of Andrenosoma occurring in eastern North America; four additional species are restricted to Texas and a fifth occurs only in the western U.S., but the genus reaches its greatest diversity in the Neotropics.