I’m not normally one to try to photograph birds—I have neither the expertise nor the long lenses that are generally required for good bird photographs.  However, during my March trip to Argentina I scared up this burrowing owl (Athene cunicularia), who flew a short distance, landed on a nearby fence post, and then just sat there staring at me—almost as if it was daring me to try.  Never one to turn down a challenge (real or perceived), I took the bait.  My longest lens is a 100mm macro, so I set the camera to automatic mode, pointed it at the bird, and started walking.  After each slow, deliberate step I clicked the shutter, racking up about a dozen shots by the time I took the photos below.  They are minimally cropped only for composition and, thus, attest to how amazingly close the owl allowed me to get before it finally found the situation just too unsettling and flew much farther away.  My colleagues commented afterwards that they wished they’d taken a video of me stalking the owl (which they found almost as amusing as the bird’s incredulous stare).  Perhaps all the tiger beetle stalking I’ve done helped. 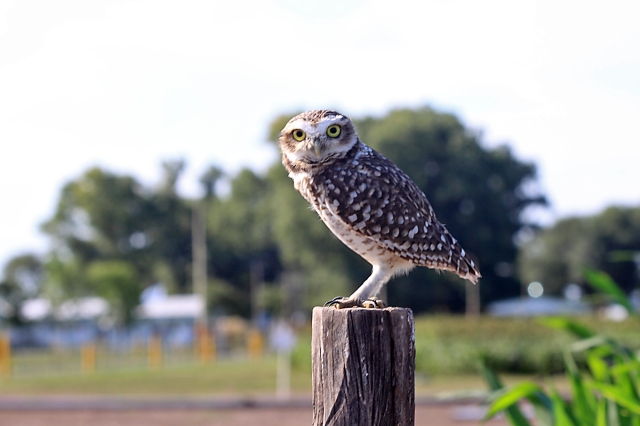 Ted C. MacRae is a research entomologist by vocation and beetle taxonomist by avocation. Areas of expertise in the latter include worldwide jewel beetles (Buprestidae) and North American longhorned beetles (Cerambycidae). More recent work has focused on North American tiger beetles (Cicindelidae) and their distribution, ecology, and conservation.
View all posts by Ted C. MacRae →
This entry was posted in Aves, Vertebrata and tagged Argentina, birds, nature, owls. Bookmark the permalink.

15 Responses to Burrowing Owl in Argentina