Everyone knows that tiger beetles are predators, but look closely at the underside of the head of this female Ellipsoptera hamata lacerata (Gulf Beach Tiger Beetle), photographed in a coastal marsh in Dixie Co., Florida earlier this month.  See the ant head attached by its mandibles to the base of the tiger beetle’s left maxillary palpus?  Detached ant heads latched onto the palp or antenna of a tiger beetle are a fairly common sight—Pearson and Vogler (2001) show the head of an ant attached to the antenna of Eunota togata (Cloaked Tiger Beetle), and Pearson et al. (2006) show one attached to the antennae of Cicindela formosa (Big Sand Tiger Beetle).  I’ve also photographed Cylindera celeripes (Swift Tiger Beetle) with an ant head attached to its antenna.  Pearson and Vogler (2001) and Pearson et al. (2006) both suggest that the ant heads are the result of predation attempts by groups of ants attempting to overpower and kill the tiger beetle, making the ants the predators and the tiger beetles the prey. 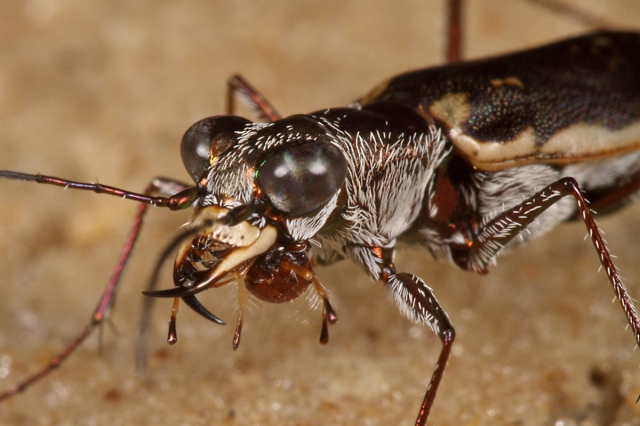 Note ant head attached by its mandibles to the base of the tiger beetle's left maxillary palpus.

Although some ants are well known for their predatory horde behavior, I’m not sure I buy this as an explanation for the common occurrence of ant heads attached to tiger beetles.  Tiger beetles themselves often prey on ants, and while I have seen numerous tiger beetles with ant heads attached to them, I have never seen one actually being overpowered by ants (scavenging an already dead tiger beetle, yes—but not overpowering and killing one).  Moreover, the ant heads are nearly always attached to the base of an antenna or palpus—right next to the tiger beetle’s mouth, and almost never on more distal parts of the antennae or other parts of the body.  If the ants were attempting to prey on the tiger beetle, wouldn’t they also (if not even more commonly) be found attached to the tiger beetle’s legs or soft intersegmental membranes?  And how would the ants have come to be decapitated while in the act of attempting to overpower the beetle?  I suggest it is more likely that the ants were prey, latching onto the nearest part of their killer’s body in a last ditch attempt to avoid their inevitable fate.  The antennal and palpal base are about the only tiger beetle body parts that would be within reach of an ant in a tiger beetle’s toothy grasp.  While the rest of the ant was consumed, the head remained because it was firmly attached to the beetle.

I realize that an identification based only on the detached head of an ant may be difficult, but if one is possible it would be appreciated.  The ant head shown in Pearson and Vogler (2001) was identified as Polyergus sp.

25 Responses to Predator or Prey?